This card may appear vaguely like the one used in my previous post using tuck stitches to fill in some “extra” empty needles to create large eyelets (April 15th, 2011: so hard to believe more than a year has passed!). I wanted to create a large, diagonal mesh for some trial new shapes that would allow me to get the movement without short row holding or angling the fabric 45 degrees.

This was the original card, using a repurposed one with “mistakes”, taped over, and more tape over new punching errors. OK for short term use, but probably not for any extended knitting 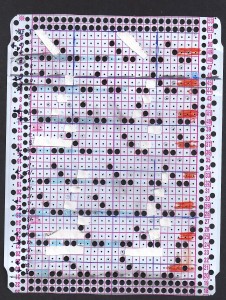 Here is the final card: orange lines are visual marking rows where knit carriage travels for 2 rows from right to left and back, pencil lines mark each design pattern repeat, blue lines the visual marking row for the end of each pattern repeat. The latter becomes important if one wants to flip the card over to get the eyelets traveling in the opposite direction, and knitting the fabric with lace carriage on right, knit carriage on left, keeping the repeat intact. In this instance, the first preselection row with the LC moving from left to right is made with the card locked. 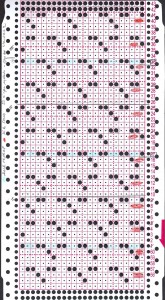 The lace is created by single transfers in opposing directions, resulting in 2 adjacent needles being left empty immediately prior to knit row sequences. When 2 needles are empty, ladders occur unless they are alternately filled in. If the lace carriage is not engaged and the knit carriage continues to make passes, ladder stripes will break up the pattern and can be a design feature. Here the problem is eliminated because the lace transfers to the left help anchor down one of the two loops. The diagonal mesh sequence is easy: 4 transfer rows followed by 2 knit. The KC is set to knit throughout. The selection with alternating groups of pairs of needles do not affect the pattern, they provide a clue to the fact the opposite carriage is used on the next carriage pass and from the opposite, right side. Proper tension and weight for the used fiber are important to keep the fabric from getting hung up on gate pegs. The patterns using the concept may be varied by knitting more rows between transfers, creating smaller eyelets by changing sequences, starting transfers from row 2 and with lace carriage on right, and more. Two sample trial swatches: 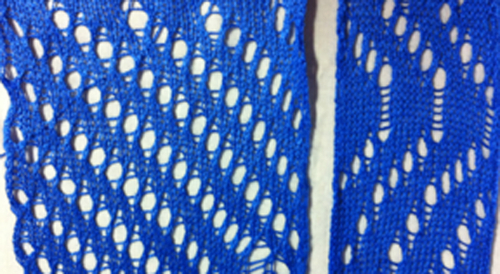 and a new test swatch