A recent forum discussion on DBJ on Ravelry led to my looking back on some of my previous posts. Some of the features in both excel and numbers changed over the years, but most basics remain. Program-specific or a “software” general search in previous posts touch on GIMP, other programs, and other fabric design choices.

Added points on separations: the post addressing how to color separate for use on punchcard machines helps illustrate the how-tos involved in hand separations

Most color changers only accommodate 4 colors, so in creating separations for double jacquard, this tends to be the maximum number. The more colors one uses in a row of knitting, the more all the stitches on the face of the fabric must stretch in order to accommodate the colors laid behind in the backing fabric. The more the stitches on the front face of the fabric must stretch, the muddier the look of the design, and the more bleed or grin through of the backing colors through the stretched stitches.
Color separation is required. The best method for the separation depends on the knitting technique to be used, the knitting machine one owns and its capabilities, the desired look of the finished fabric, and the method for creating the separation.
Method 1 (graph 1): always works. Knitting occurs for one design row at a time. The knit design row 1 is expanded into 8 on a graph = row 1 color 1, row 2 color 2, row 3 color 3, row 4 color 4. In order to knit the design, this separation would need to be elongated X 2 in order to make passes to and from the color changer. The result is likely to produce elongation in the image, regardless of the backing method used. In Japanese machines, one usually performs the first preselection row toward the color changer. Passap is a bit different. In addition to the 4 color changer being on its right, the first pass to the left aligns pushers and needles, the second pass to the right preselects pushers for the first row to be knit after the color change on the right. The original design may have an even or odd number of rows since each row will be knit twice
In Method 2 (graph 2): the first preselection row is performed moving away from the color changer, so that the ground color is knit first for one row, moving toward it. This should fill in the majority of the needles. When the last row is reached, the color is changed back to the ground color, Row 2, the carriage will be on the right, heading back to the color changer as the sequence is completed. The expectation is that the ground color, 1, will knit the majority of the needles.
Method 3 (graph 3): is similar to Method 2, but the ground and background are not split in the first 2 rows of the graph. This is the hardest to achieve in terms of knitting without errors in patterning or dropped stitches. The main color knits for 2 rows before the other colors knit, may alter the availability of needles required empty for placement of the stitches in next color row.
In both methods 2 and 3, the design must have an even number of rows.
Method 4 is based on color layer separations. Machines such as the E 6000 allow the knitter to superimpose designs (rules for order may vary) and offers techniques for then performing the separation for the knitter, usually as seen in Method 1. The size of the motif for automatic color separation is dependent on available Ram and the knitting machine model. 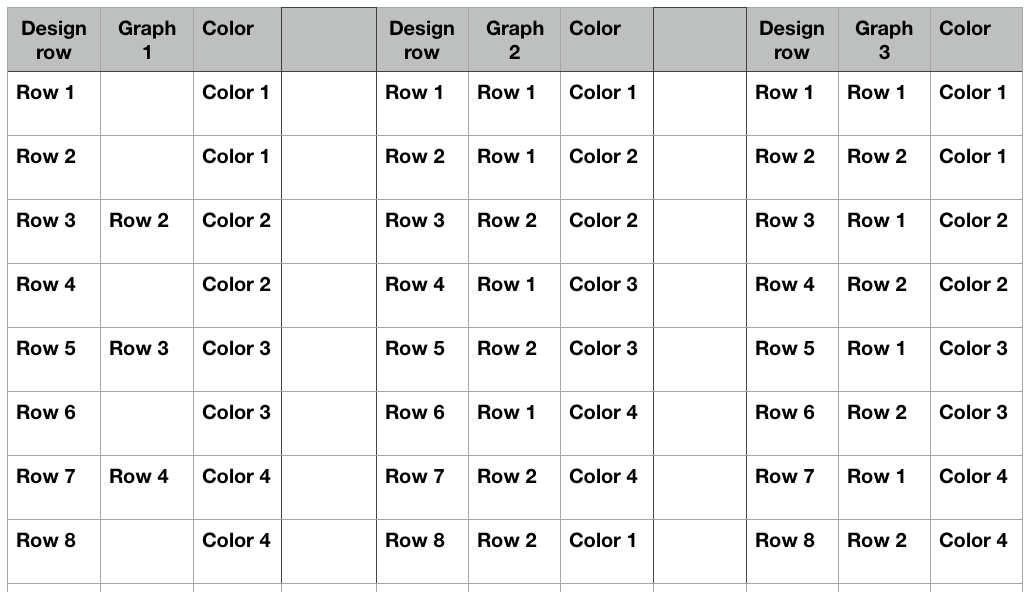 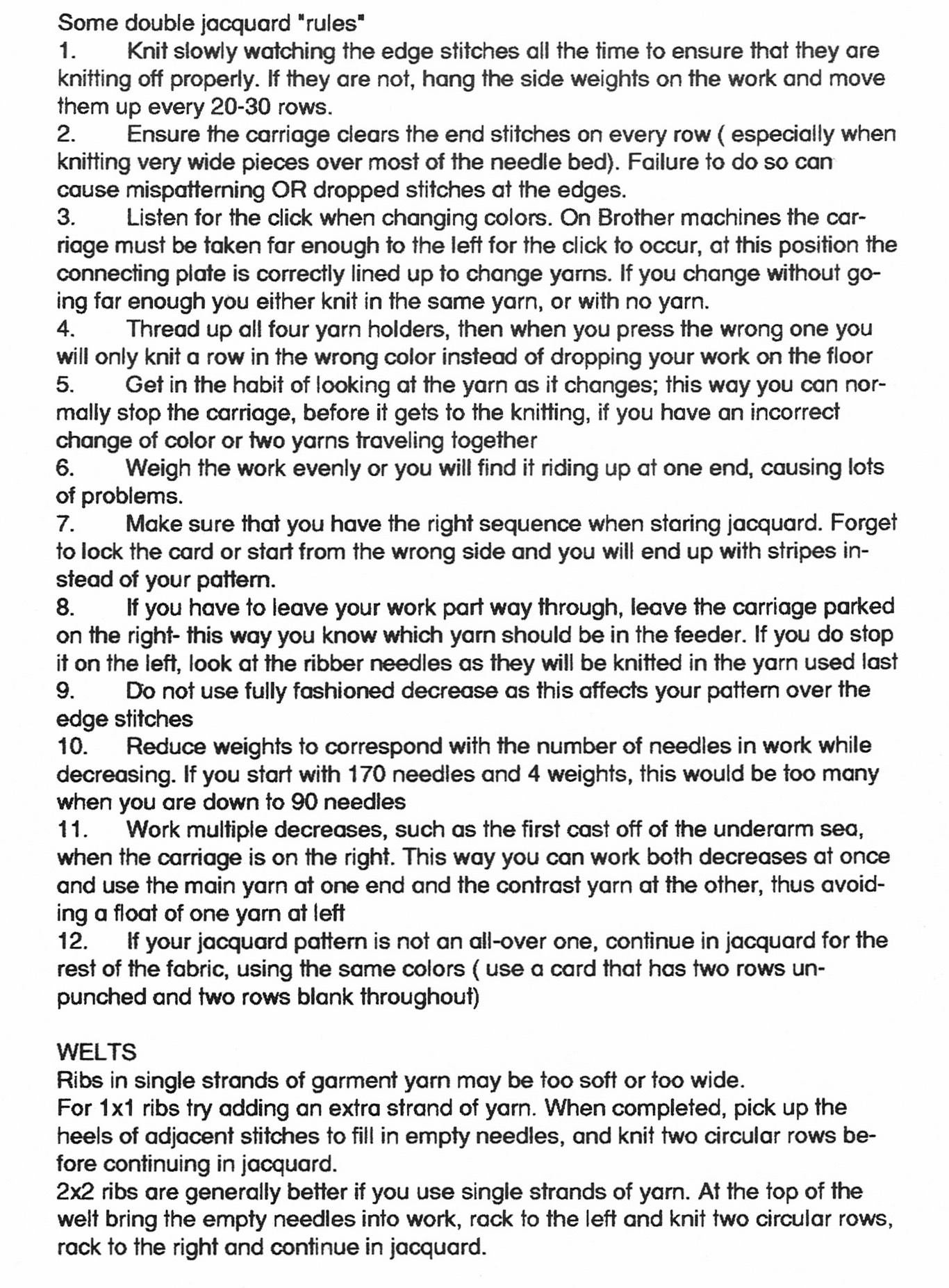 Another former handout, intended for Passap knitters. Many of these fabric options could be emulated on the Brother machine, if separation method 1 were available, with a bit of interpretation. A machine knitting cross reference chart 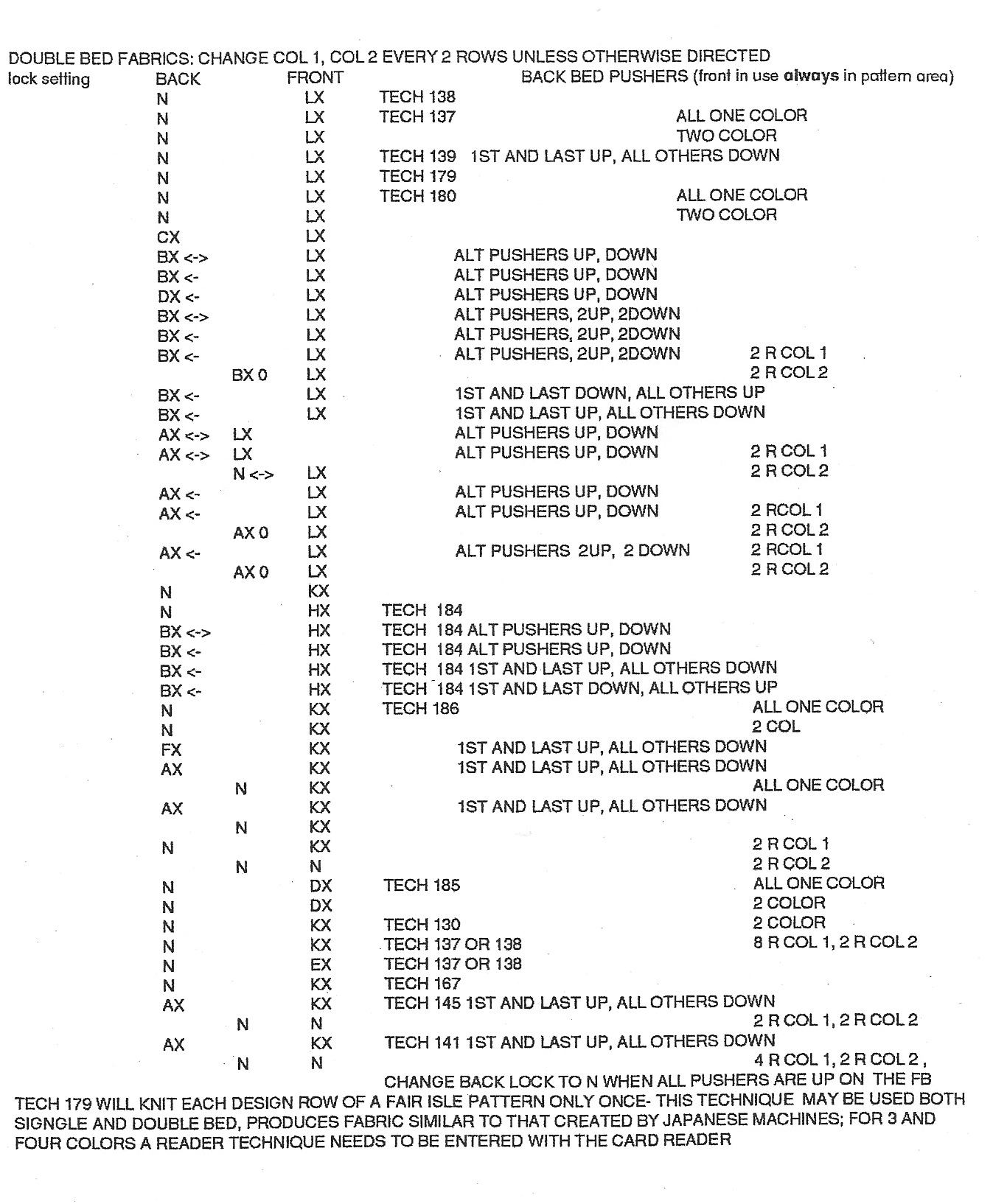 Sometimes months or even years go by before I revisit previous posts. As I review the information, it may occur to me to think about it further, and /or to present it in a slightly different way. I find it hard to believe how much time has passed since https://alessandrina.com/2013/09/06/more-knit-bubbles/ got published.  Here is another way to look at the fabric on Brother KM. Since I knit on a punchcard or a 910 electronic model, I will refer to pattern repeats in terms of punched holes or black squares.

Bubbles and drop stitch lace share some of the same principles, the effect is created by stitches that are larger than others. Slip stitch setting can be used to automate needle selection. Black squares or punched holes will knit, unpunched areas or white squares will not, with needles left in the B position. Brother preselects needles for the next row of knitting, so when combining hand techniques with needle selection, one has the option to intervene before the next row in the design is actually knit. Using the card or mylar to read row 1 of the design helps determine where on needle bed to set up your repeats. In this instance, the ribber knits every stitch, every row, with one extra needle on left (or more on each end if preferred) in addition to repeats # required to achieve the desired width. All needles are in work every row on both beds. Main bed knits in response to programming. Working in multiple of repeat -1 on the top bed, plus one needle in work at each end on the ribber. Considerations need to be taken to align design properly. Markings on my metal bed are from a totally different project. 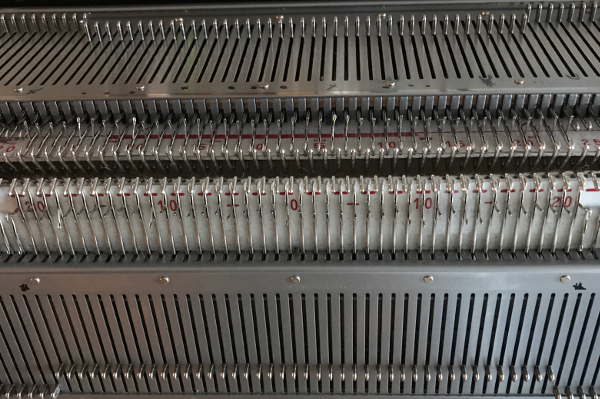 The goal is this needle arrangement

“air knitting” with carriage set to KC will help identify patterning repeats. Groups of 7 include a needle on each end which will be pushed back to A position in the body of the knit/ NOOW (needle out of work) indicated in chart for main bed needle set up 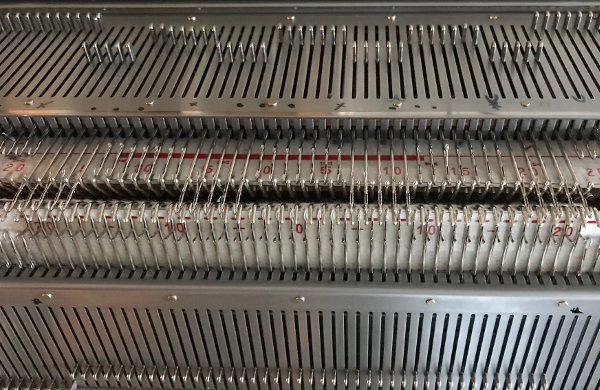 a needle on either side of the groups of 7 is pushed all the way back to A position, remain there throughout  the piece

an extra needle is brought into work on the ribber on either side of repeat ends. Machine settings: main bed set to slip <->, ribber set to normal knit 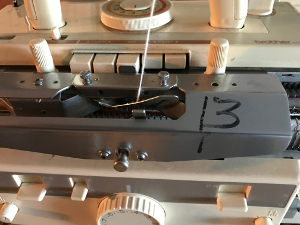 the ribber has now been set  up for knitting every needle, every row, with the caston and desired edging completed. The first row is selected on the main bed for pattern knitting. 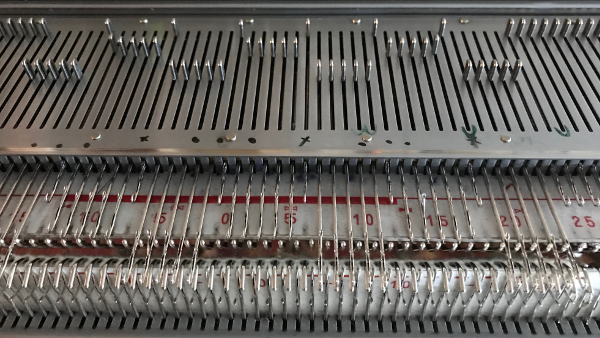 since there are needles out of work and pattern knitting is involved, if KCI is used or end needle selection is not cancelled, the end needles on the areas being slipped will be selected to knitting position, so patterning errors will occur. First row knit on both beds is shown on remaining needles 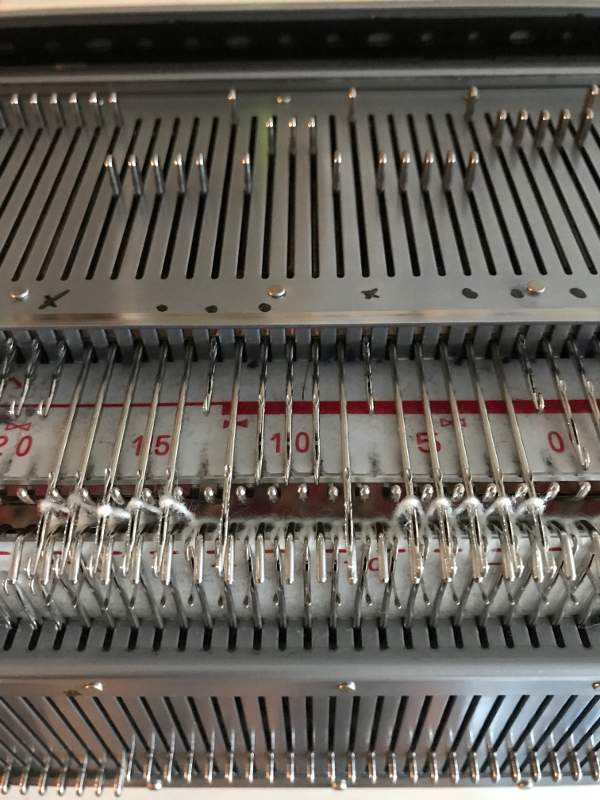 Brother knits a row while preselecting for the next one. Here the needles in B would slip/ not knit on the next row, needles out to D (Brother skipped the letter C in needle positions) will knit. Prior to knitting that next row, stitches on the now non selected needles should be dropped across the bed 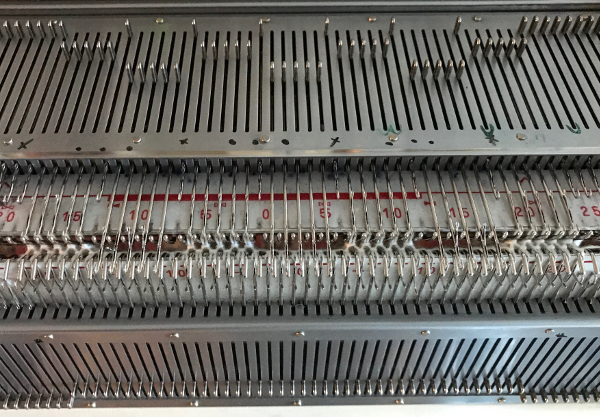 this shows those stitches have been dropped, their needles are now empty, and returned to B position 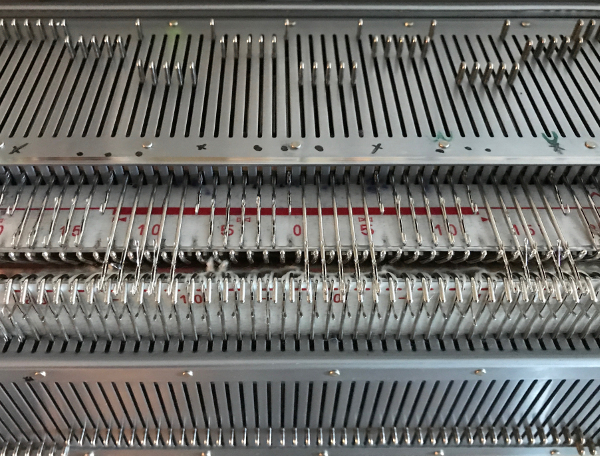 end knitting with same treatment as it bottom (swatch was simply dropped off).

It is possible with solid geometric shapes such as these to release stitches at the completion of each shape. Type of yarn used and loop behavior upon dropping stitches are variables that influence success in doing so (other swatches )

An acrylic yarn was used: the first image is the fabric’s “relaxed view” 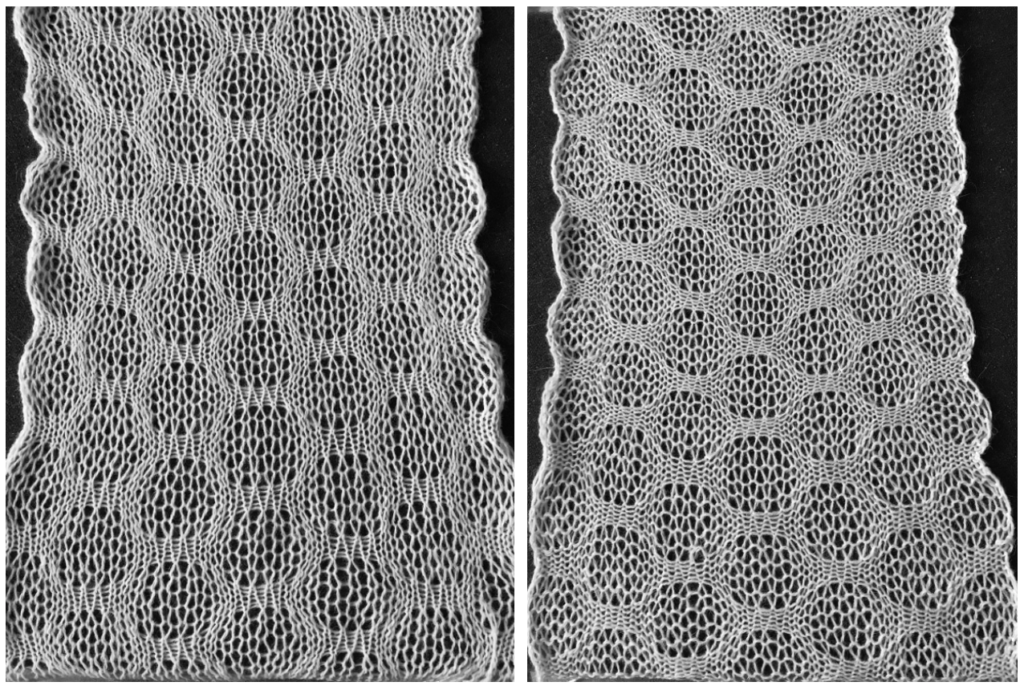 the variation in width is due to adjustments in tension, the swatch folded over itself shows the difference in another way 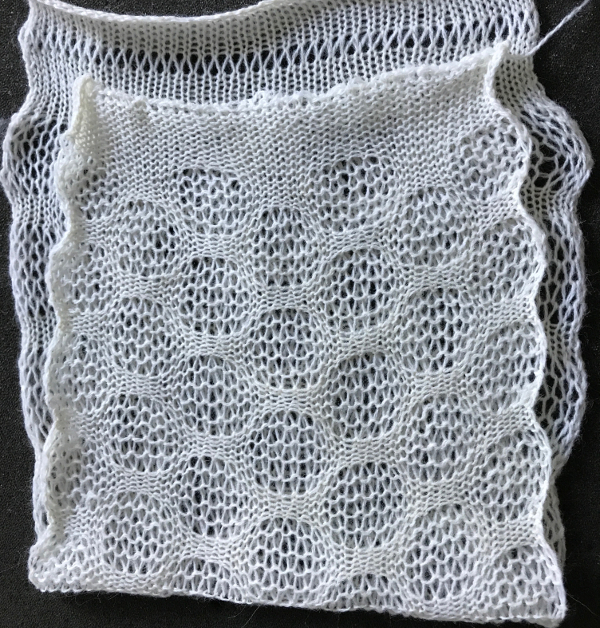 I was written an email asking about the possibility of creating bubbles in hand knitting, this is my attempt, may serve as a starting point for DIY.

Below a small sample serves as an illustration of my first attempt. It was knit in acrylic,  steamed to the point of death, but shows the type of elongation of the “bubble” stitches using this technique. To keep things simple I stuck to a “square” shape. Stitch counts and placements of shapes may be adjusted to suit. It is possible to knit or purl the yarn overs, unraveling the extra stitches before knitting the original number of stitches when the top of the bubble is reached, but the resulting look is a bit different. It is worth trying, depending on preference for the type of result, or the way one is accustomed to dealing with elongated stitches and yarn overs in hand knitting. 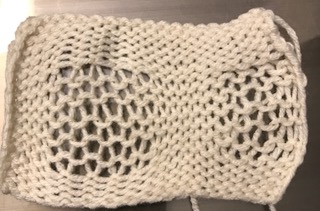 So I now own a new Mac, no longer have Microsoft Office available, and am now working my way through charting diagrams using Mac Numbers.  Below is a  possible working chart with a different stitch count than above. I would suggest larger blocks of all knit stitches and rows between “bubble” repeats 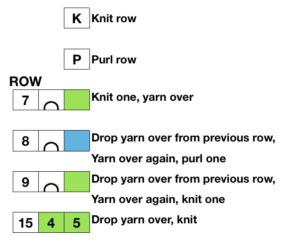 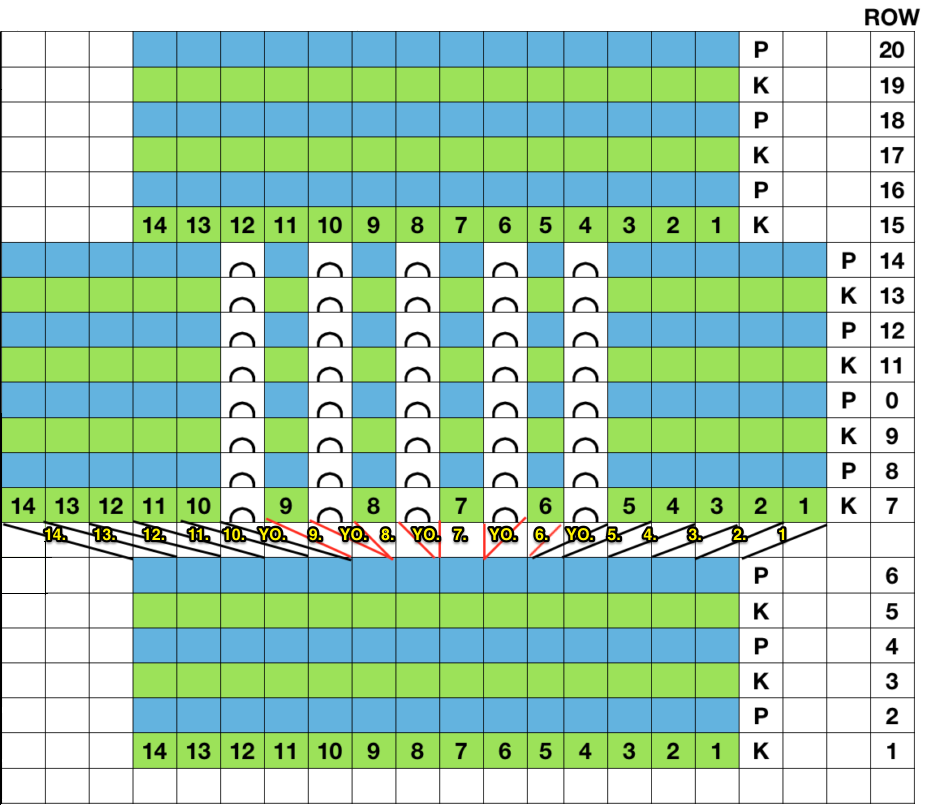 The further step of taking the technique to a brick repeat follows. I have been experimenting with a varied number of rows and stitches. Subsequently, I was happier with knitting or purling the yarn over as an extra stitch/ increase until I had worked the desired number of rows, then dropping those extra stitches, thus working once again on the original number cast on. The shape also seemed a little less square to me if a second row was worked before returning to making yarn overs. A border of more than one stitch on either side helps stabilize the shape edges. 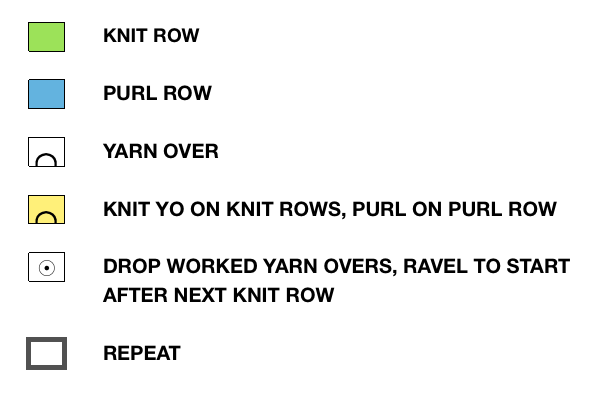 This sample was worked in my “throw away” acrylic 4 ply. To my eye, the most pleasing and effective bubble happened on the least number of rows of dropped stitches (diagram provided above). The top and bottom edge of the “bubble” looked the best when stitches were taken off the needle on one row, and not allowed to “run” to the yarn over row until after the next row was knitted or purled all the way across. That may not be the best idea, especially when working much wider pieces of knitting. Dropping back to yarn over row as you work row 6, 13, etc. of chart provides a more controlled way of checking “runs” for individual stitches, making repairs for any errors easier. Dropping yarn overs with each pass seems to me to be the easiest way to track knitting as it progresses or gets wider, and counting bubble rows is far more easily tracked. Below, variation #5 matches the above chart. 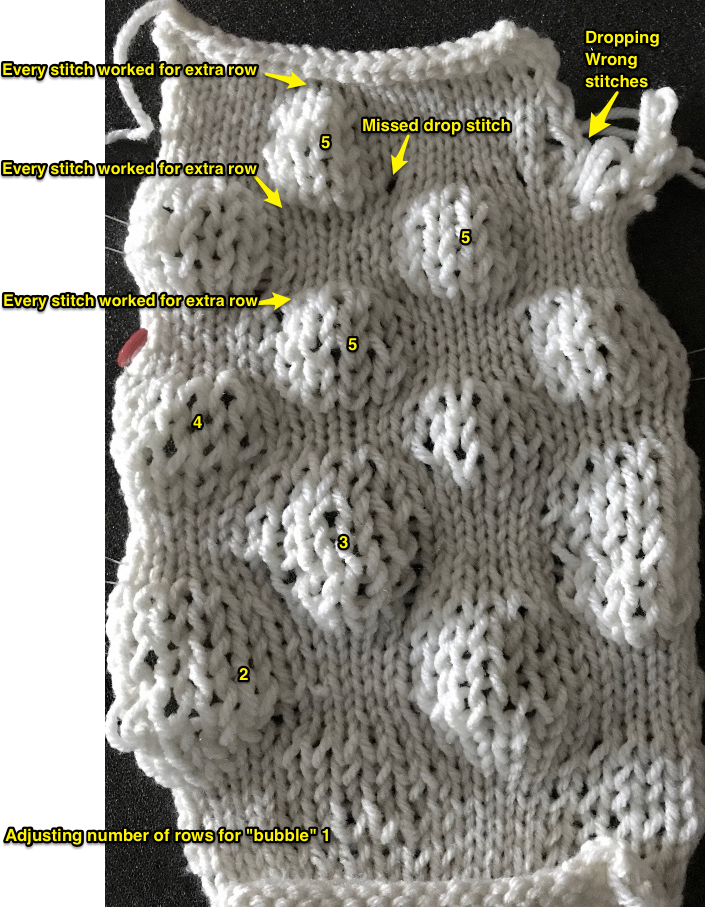 the reverse of the fabric, lightly killed with steaming and pressing 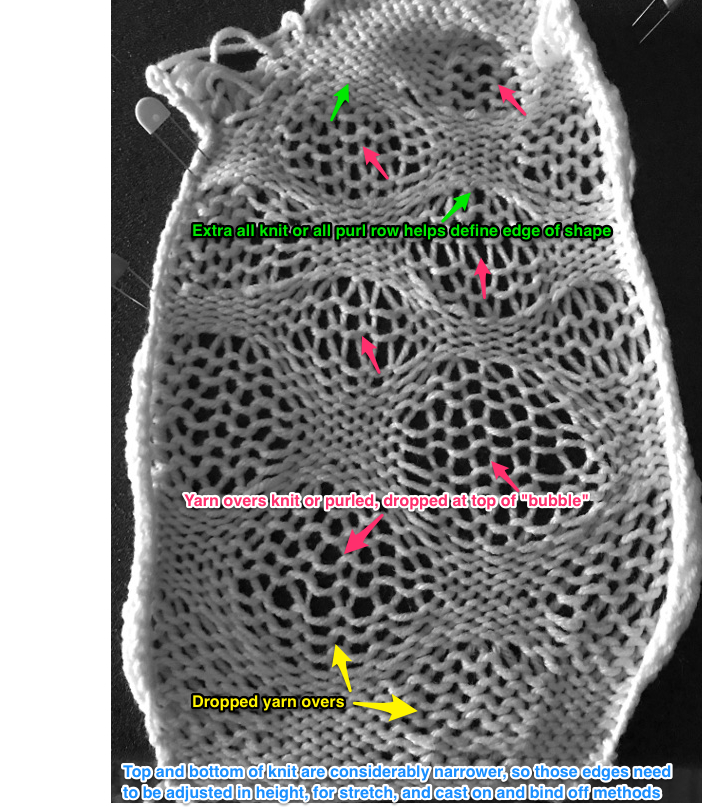 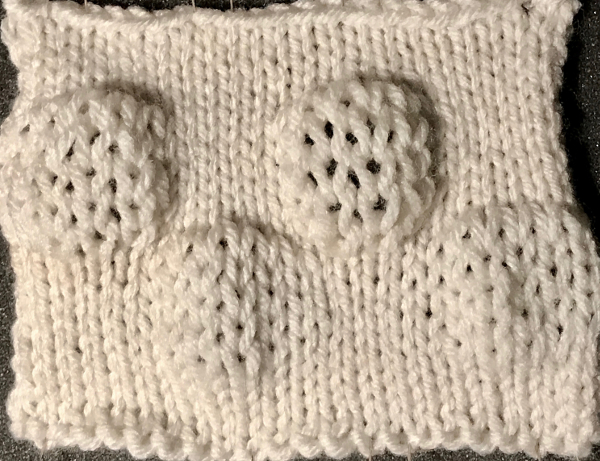 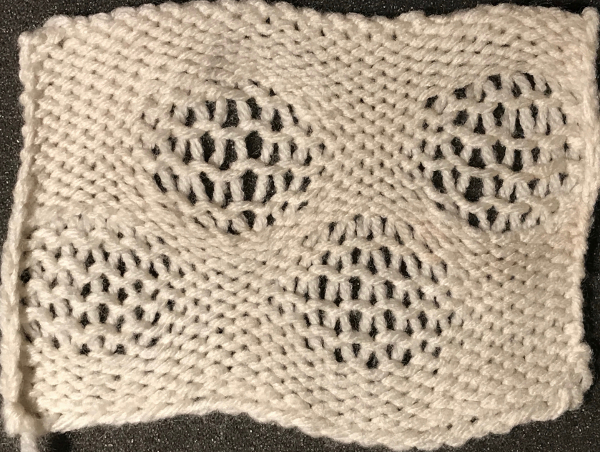 This is a quick reference in response to a Ravelry question. L cams clip onto the needle bed (like single motif cams on some punchcard machines). Where there is a cam the needles won’t select for lace. They come in 4 or 8 stitch size. They can also be used across the bed if you want to block part of the punchcard for plain panels. You can even put several next to each other to block 12 or 16 sts. On some lace carriages, the cams may be a bit high but you can shave a tiny bit off the top so they fit. They can be moved along mitered edges to highlight the miter.

The pages below are from Brother machine manuals. I don’t believe there ever was a separate manual for the LCs themselves, though they were often sold as a separate accessory. 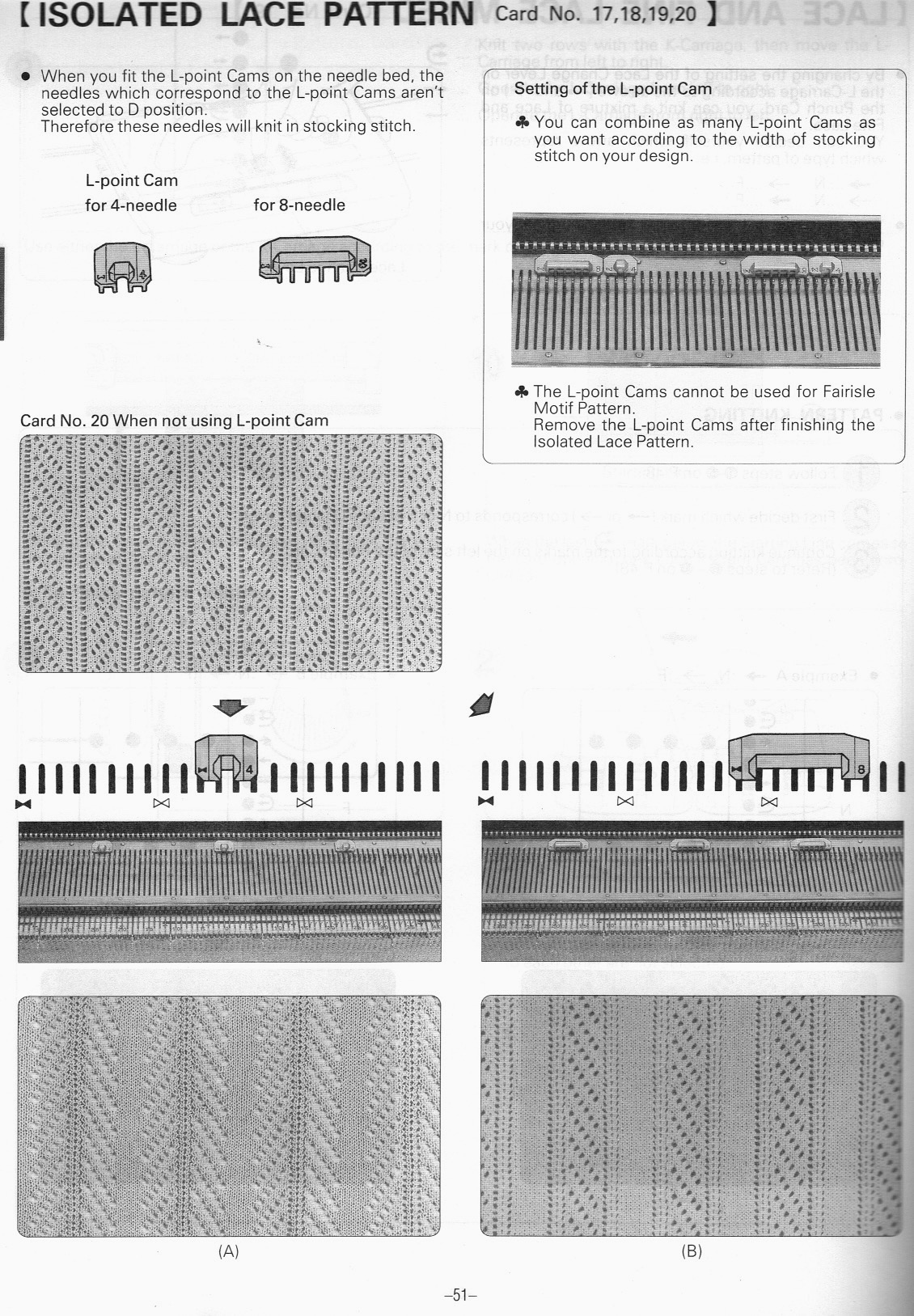 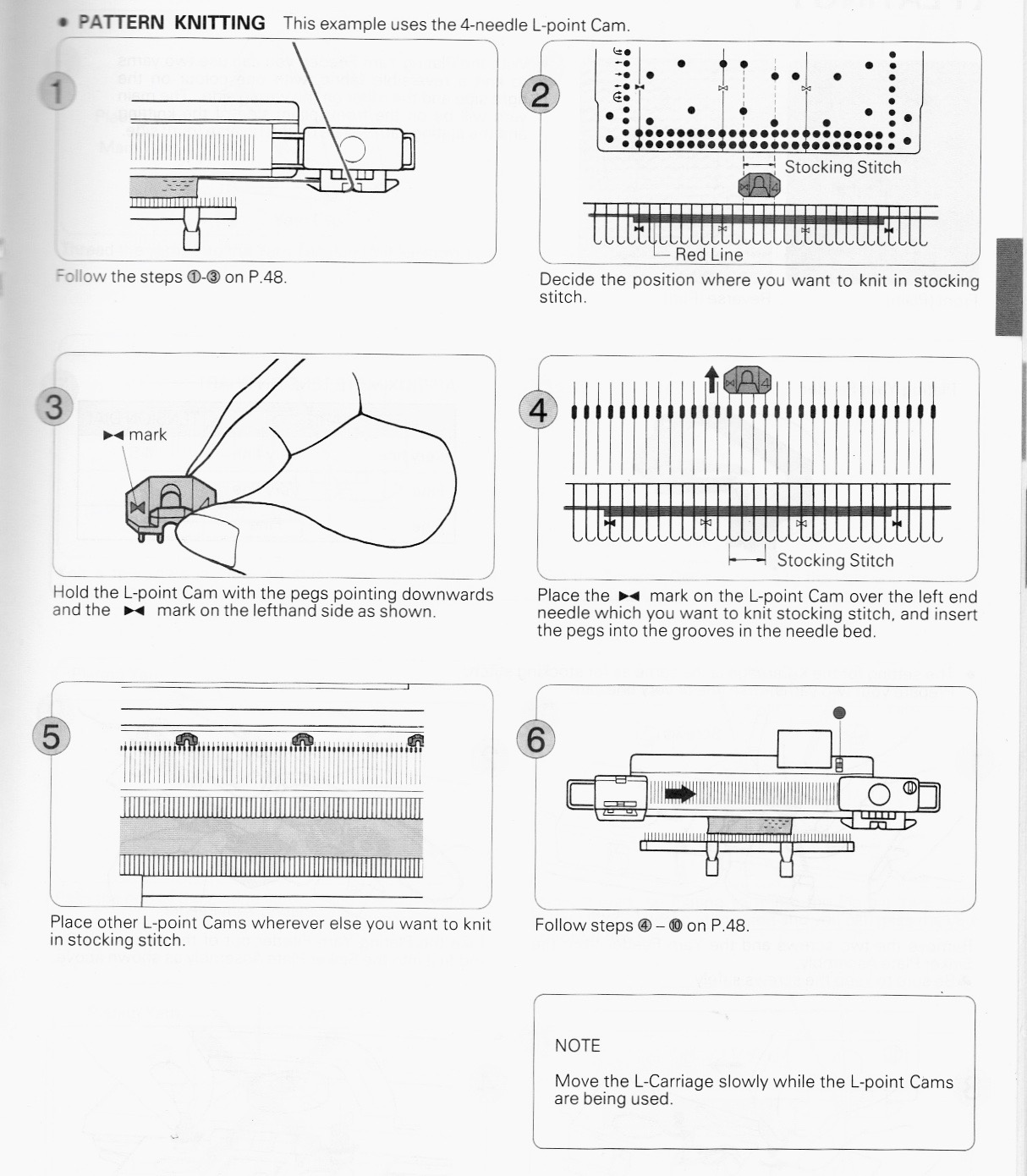 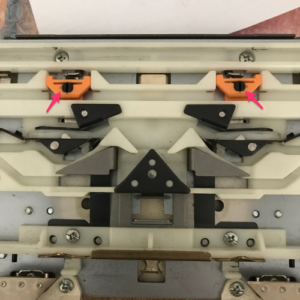 over the years color varied, but function remains the same When using extension rails for lace or whenever using 2 carriages, beware not all rails are the same and that may make a difference with some KM model years