After a complicated nearly 3 months I am returning to some knitting, and am sharing some of my results once again.

I have always found 2 or more color patterned brioche stitches executed in hand knitting as inspiring and complex challenges to admire, but am not tempted to actually attempt to execute them in any way.

I have not knit on a Studio KM in more than a decade. I have been asked whether this fabric is possible to produce on Studio/Knitmaster. The most crucial difference imo between the 2 brands (Passap has its own universe) is the fact that Studio selects and knits with each pass. Needle pre selection for clues is not an option. I have gathered some information from manuals on tuck knitting including “English rib and Double English rib” as clues to anyone who wants to work out the technique sorting out their own Studio settings tuck on studio km

This was my first Brother machine knit swatch result: 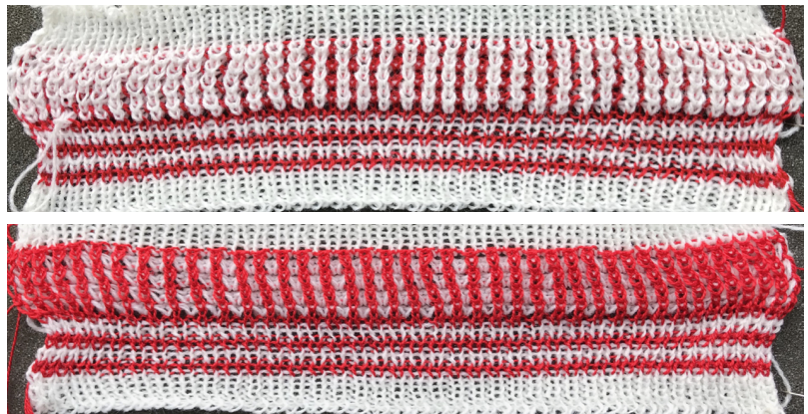 Each of the 2 colors tucks for 2 rows and in turn knits for 2 rows alternately. Settings are changed manually as shown below after every 2 rows knit, following each color change on the left. 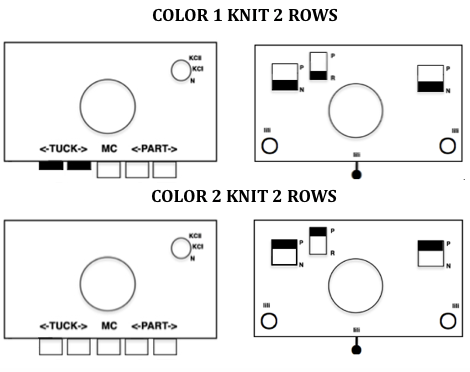 Making things a little easier: the top bed may be programmed on any machine, including punchcard models to avoid cam button changes in the knit carriage every 2 rows. With the main bed set to tuck <– —> throughout, black squares will knit for 2 rows, white squares will tuck. First preselection row is toward the color changer. When no needles are selected on the top bed (white squares), ribber is set to knit. Top bed will tuck every needle.

When needles are selected on the top bed (black squares), the ribber is set to tuck in both directions. The ribber will tuck on every needle. 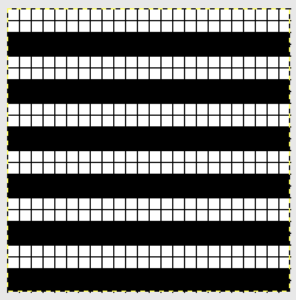 Proof of concept: blue yarn is used on rows where main bed needles are selected (black squares). The crossed stitches at the top right begin to represent an effort to create surface shapes or designs on the fabric. They are created by cabling 1X1, making certain the stitch creating the “shape” is carried to the front side of the fabric, the opposite stitch crossed so it is facing the knitter.

I used KCI in this instance, first needle on left in work on ribber bed, last needle on right in work on top bed. A border is created on the knit’s edges on the far right and left. The reverse side of the fabric: 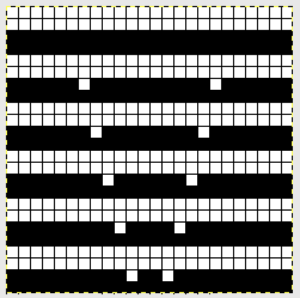 Working the 24 stitch repeat using KCI; both first and last needles in work on the ribber bed. Due to operator error and forgetting to change ribber settings after transfer row, I chose to stop knitting rather than attempt a pattern correction

Another attempt at cabling, 1X1 and 2X2. That white line in the bottom image on the right was caused by the color changer picking up and knitting both colors for part of the row before my noticing it. I got rid of the “wrong” color from the feeder and continued on. The wider 2X2 cables require “special handling” and eyelets are formed on columns aside them after transfers are made. 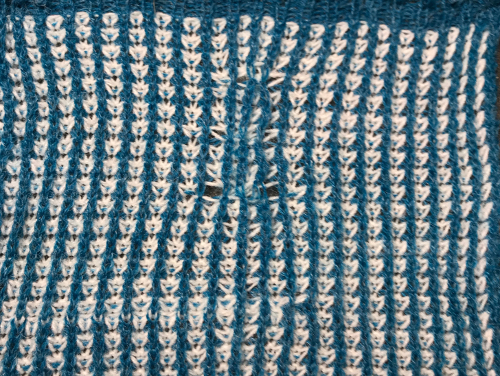 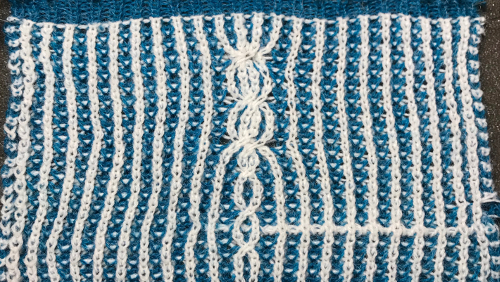 Before attempting to knit crossed stitches such as the above in an every needle rib, it is worth exploring cables crossed in vertical stripe color patterns single bed. This is a hand knit inspiration series of patterns, better left to hand knitting 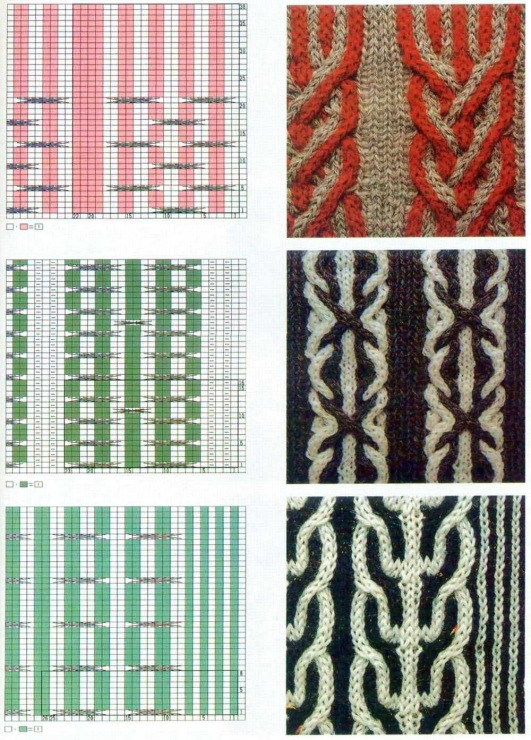 one of my ancient machine knit demo swatches: 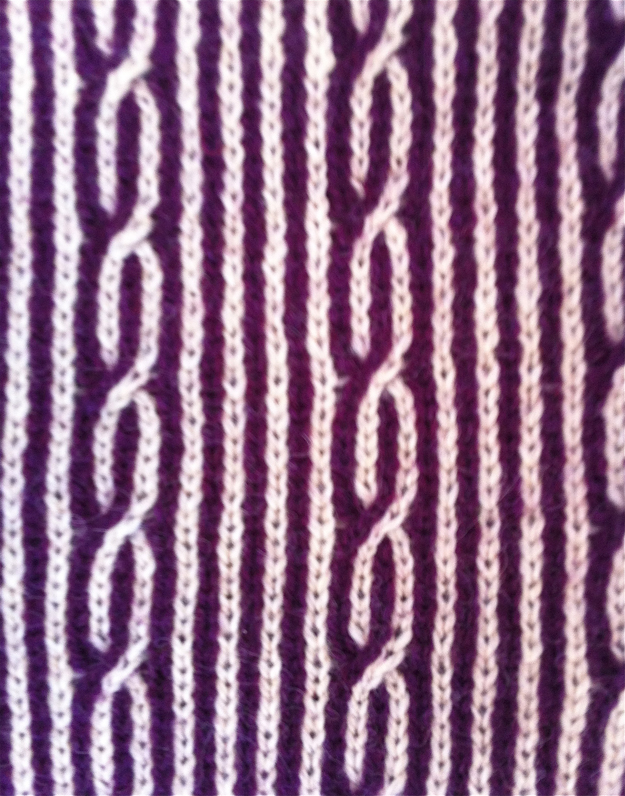 On any knitting machine with every other punched hole, black squares or pixels locked on a single row, id the pattern is knit in FI, continuous columns of  vertical color are created.

If the the goal in creating the continuous an unbroken vertical stripe 2 color pattern, one must place like color on like color. Because FI is essentially a slip stitch the fabric will be tighter, narrower and shorter than that produced knitting either yarn in stocking stitch. Cables on the machine need to be transferred across fixed widths between needles, so there are distinct limits as to how far stitches will allow their movement in groups in either direction. Loosening the tension can often help. Sometimes it is possible to create extra slack by a variety of means, making moving the stitches easier. I have found my own limit for this fabric was working with a 2X2 cross (it is possible to work moving single needles as well). Adding to the complexity single bed: proper needle selection for the next row knit needs to be restored prior to knitting it when using the FI setting, movement of stitches is mirrored on the knit side in the opposite direction of that viewed on the purl. Visualizing some possibilities as worked on the purl side 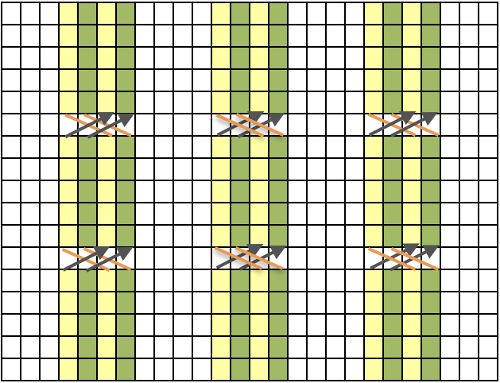 to consider the knit side appearance mirroring is not enough 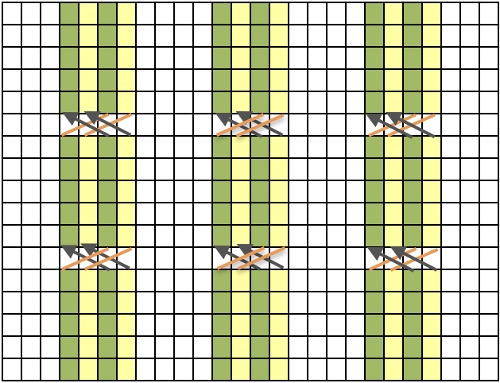 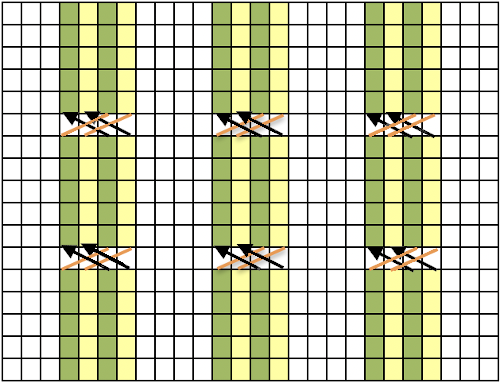 When working every needle rib it will take 4 rows of knitting with 2 color changes to produce the striping. R represents stitches on the ribber, K the stitches on the knit bed

Every needle ribs are generally knit at tighter tensions than when the same yarn is knit single bed. Too loose a tension in any tuck fabric causes problems with loops forming or knitting off properly, too tight will produce stitches that do not knit off properly. One limitation of crossing stitches here is the actual stitch size, which needs to be constrained to produce the fabric. Tiny stitches need to travel across fixed space. One by one crossing is manageable, 2 by 2 requires extra slack to make the transfers possible.

Adding some “give” to crossed stitches
1: the carriage has moved from left to right after the color change. All needles except for the four white squares in my design were preselected prior to the next row of knit. The carriage now stays on the right
2: take note of the white tuck loops formed on the ribber on the previous pass from left to right
3: white tuck loops ( I chose center 3) are lifted up and off their respective needles and allowed to drop between the beds. This will allow the 4 white cable crossing stitches to have more slack.
4: cross your cable in the intended direction
5: push cable stitch needles out to E
Knit from right to left, change color, continue in pattern 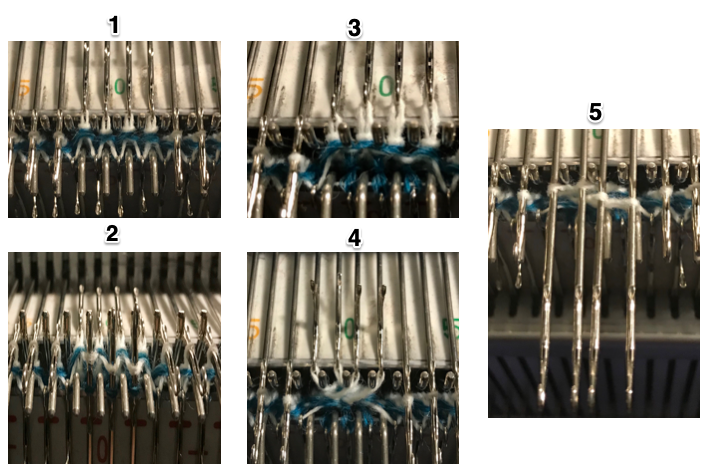 With some planning on longer pattern repeats it is possible to plan added clues to tracking rows on which the cables occur, and their location on the needle bed. Repeats with very few marked areas merit testing in tile as any other repeat. The repeat on the left when tiled shows the area of a patterning error, on the right with the missing blank rows added the problem is shown to be resolved. 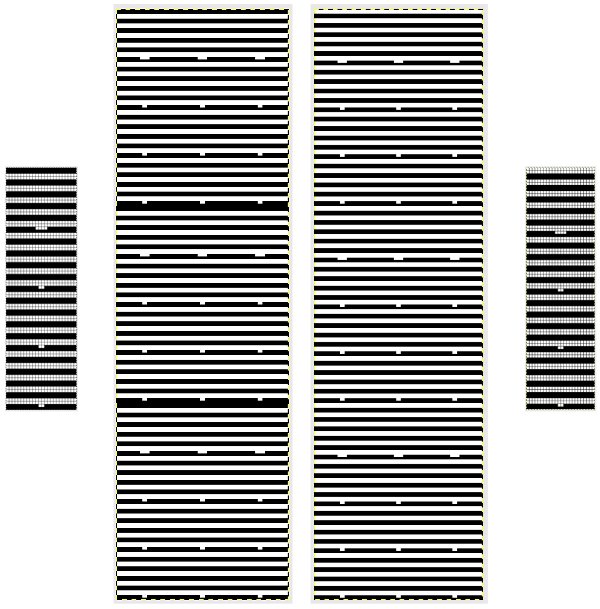 A proof of concept swatch: 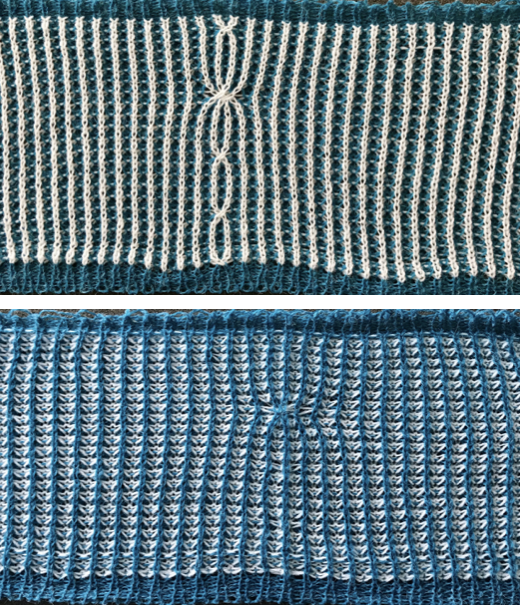 Planning for all over brick layout of corrected repeat: 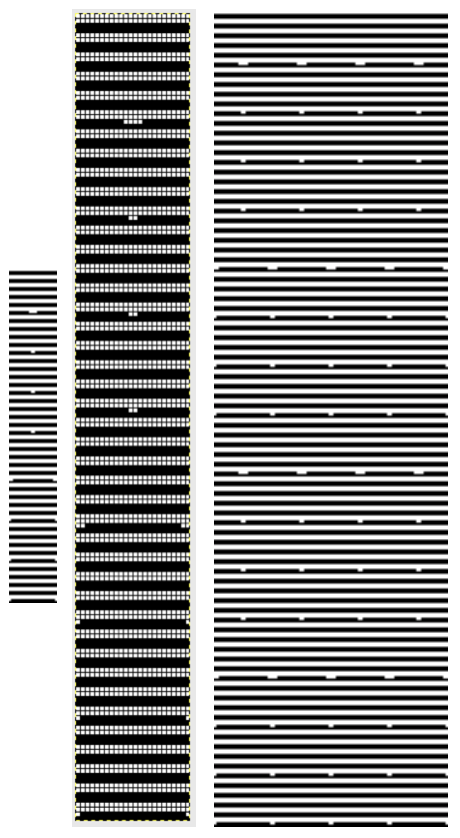 More detailed charts of the 2 repeats, suitable for punchcard machines, editable further for use in electronics. Ayab knitters need to repeat the final motif across the width of the download to match the number of pixels to the number of stitches in use across the needle bed, use single setting.