Lots of crochet patterns of late have featured chains and bobbles as components. I have been playing around with the idea of combining both. The fabric could be shaped by varying the number of chains and double crochets creating bobbles, and with very thick yarn the fabric may appear nearly solid. This is my working graph. Ovals represent chain stitches, beginning at the left chain is created, first bobble row is represented in red/orange; second bobble row is represented in green, crochet after work is turned over, and when the opposite side is reached, visually it will appear as though a single row of 5 bobbles has been completed. The numbers represent the number of triple crochets in each popcorn, the crosses are joining single crochets for anchoring chains to previous rows, and closing off popcorns. The graph was created in Excel.

The yarn in use here is a very soft acrylic, intended for someone who cannot wear wool. 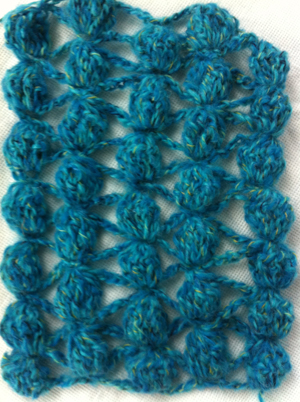 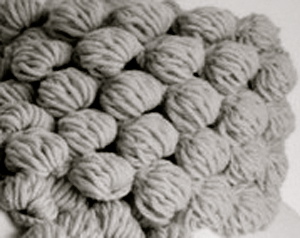 Nearly any crochet fabric has the potential to be incorporated into knit items of clothing and accessories.