The link to this trim has often appeared on Pinterest but was later deleted.
I knit it as directed, and in turn, slipped it off the needle and onto the bulky KM 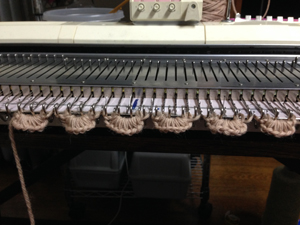 even with blocking and hard pressing, it still really wanted to get back there

it is, however, a fun idea to play with

B/W illustrations for some of the steps

One thought on “HK trim as MK edging”