A new Ayab release has been available for download for a while, though I have not had the opportunity to explore it.
Along with several new software features, a manual is now also available including a wealth of information on developing designs for download with various software and executing them in a variety of techniques on both the single and double beds. Kudos to the contributors to the project.
My tendency is to explore basics first, looking for any differences in how menus or techniques might differ from any experience with the software or knitting techniques in the past. There is some exploration of the design that can happen prior to turning the power on, which is required for configuring and knitting the project. Since houndstooth designs turned up again in the Facebook machine knitting group today, I thought I would begin with a simple hound design. Red squares mark the black ground in the repeat to help identify changes in rotation. These charts reflect some of the mirroring and rotation of original image possible within a design program (GIMP) 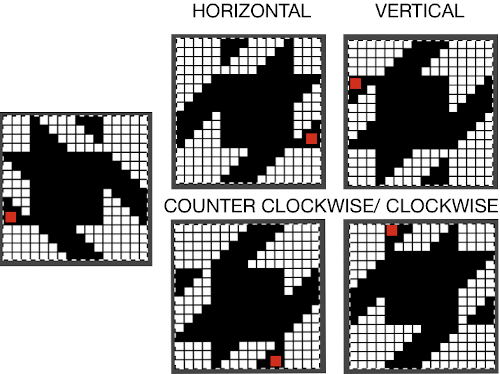 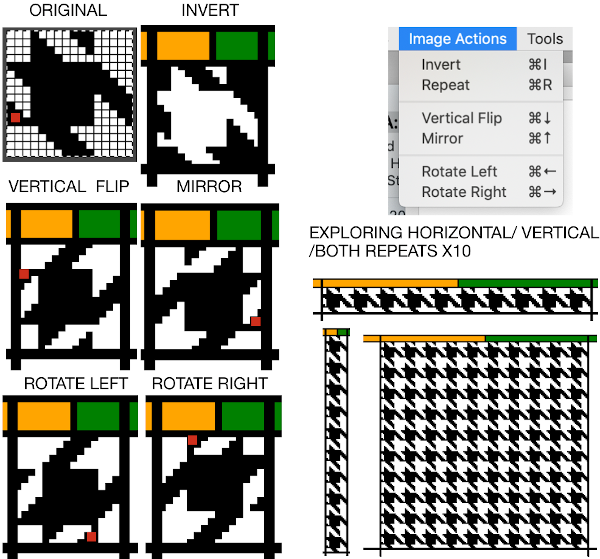 The horizontal repeat option has eliminated the requirement for tiling it in a width matching the number of needles one wished to repeat on the needle bed, though that can certainly remain an option if one wishes to add borders bands or knit intermittent vertical design stripes in the body of a wider knit. It should not be necessary to download the repeat tiled vertically as well as horizontally since infinite repeat is still available in the configure menu, but tiling in both directions allows one who may not have attempted doing so in the design software to visualize how the groups of repeats might align in the body of the knit thus allowing the opportunity of noticing potential errors prior to any knitting.
My initial test swatches were knit programming the 16X16 repeat X3 but using fewer needles than that. I am still finding the configuration process seems to take an extended period of time as compared to mylar sheets or img2track downloads. If new to the program, there are plenty of opportunities to double-check entries ie. here my first swatch was planned as fair isle 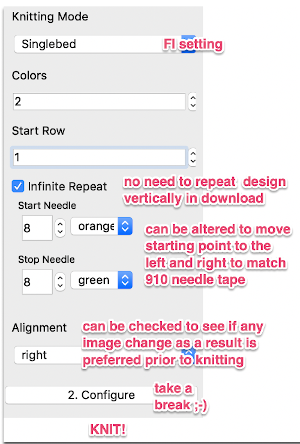 I have been told “Regarding the slow startup, try clicking the Knit button anyway, even though it’s still gray. You’ll find that it’s actually ready for action within seconds of clicking Configure“. With further testing I found this to be true indeed.
The repeat above accounts for 16 stitches in width, not 48 as I was planning, the full download count is reflected below 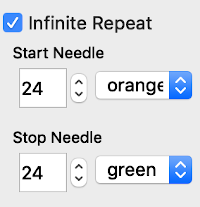 The FI results are shown on the left, the first dbj test with lili buttons engaged and both carriages set to slip in both directions appear to the right. Note the difference in width and height of the resulting knit. The floats in FI are overlong, and there are some separation and lengthening of the stitches along the diagonal edges of the houndstooth shape 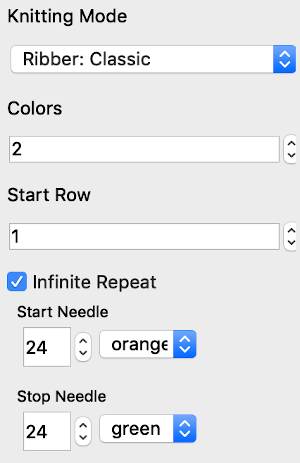 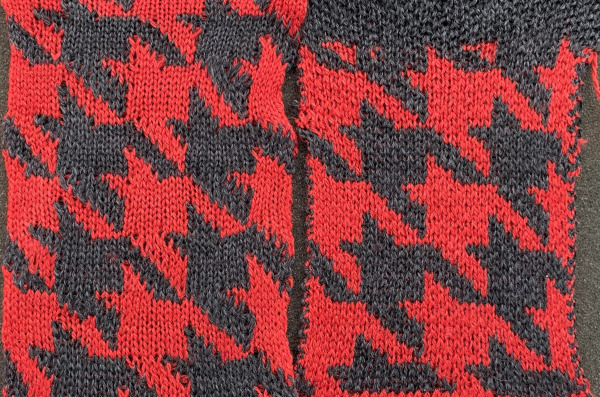 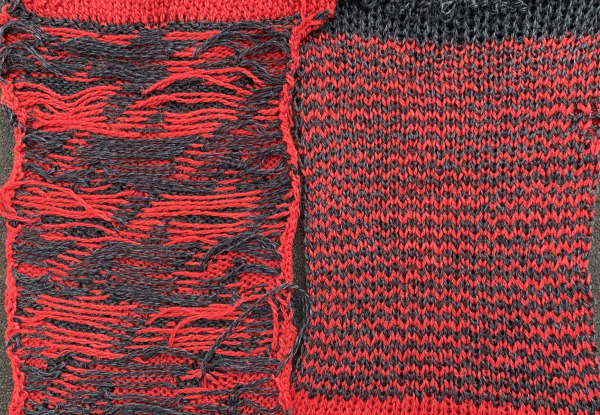 The program does provide prompts as to which color should be picked up next, and clues as to where one is in the repeat, they are found at the bottom of the Ayab window. I happened to grab content with color B upcoming both times.

An observation: while the sinker plate is technically labeled with A and B for 2 colors used in techniques utilizing the MC or thread lace buttons, the color changer is numbered in numeric sequence 1 to 4 from right to left as opposed to an alphabetical one, but Ayab assigns letters A to D to color positions.The Brother single bed color changer is the only one I know of that holds each yarn in place as opposed to releasing it for travel with the carriages. The double bed one does release the yarn. Set up, images, and more information on the color changer may be found in my post.
Using the same image and altering it for use with 3 color dbj options: my preferred software for designing is Gimp, using a magnification of 1200, with grid view and snap to grid options in use, and a pencil 1 pixel in width and height. In circumstances such as below, when a large area of the design is in black and one wishes to count pixels, the configure grid in the image menu will allow for changes to that which will help make the repeat clearer to analyze.

When preparing images for download, they should be indexed to 3 colors 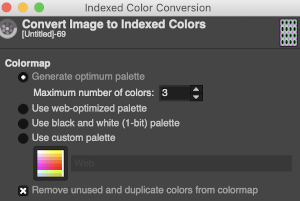 If a 3 color image is loaded into ayab, the colors on the screen change.

It takes a while when knitting double bed knits before one can assess whether the results are correct in terms of patterning since the knit is hidden for some length as it drops between the beds. Because the Ayab prompts for color changes were altered sometimes when the carriage on the right, sometimes on the left, I dropped the first sample off after slightly more than one repeat, found its patterning to be correct, and that the prompts when on the color changer side for the following row to be knit from left to right were reliable, as shown in the knit swatches. In turn, I  used an indexed greyscale image. The lettering on the right indicates where colors were placed following the give instructions, rather than where they were assigned in the original design. The manual states that the color sequence for the separation is: white, grey, black, gray, however, if the prompts for changing colors as given are followed, which is very valuable in tracking them, the knitting occurs in reverse order. 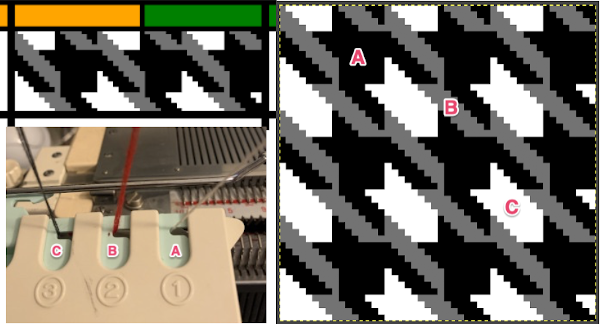 Knitting mode options for DBJ are listed below the single bed one, 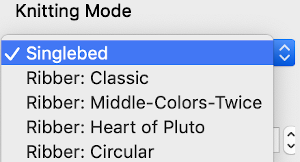 The main bed is set to slip in both directions, the ribber as well, with lili buttons engaged.  The number of colors is not altered automatically by Ayab, the change needs to be made manually. 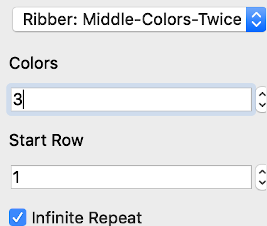 My first attempt was at knitting with the middle colors selected twice=C, B, A, B, C, B, A, B, B

The backing looks different than standard birdseye because of that change in the placement of the middle color in the changing sequences. I followed that with testing the heart of Pluto variation C, B, A, C, B, A, C 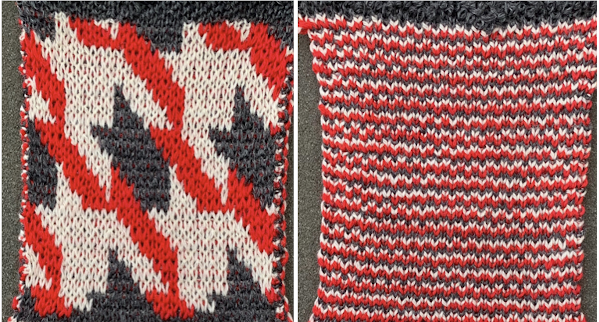 There is an extra pair of all charcoal rows at the bottom due to the fact I had forgotten to set the knit carriage to slip, so all stitches knit in that color for those 2 rows. Both repeat series measured literally equal, give or take by a millimeter or 2 depending on whether I tugged at either of them in any way.
Both methods will knit each color for each design row only once, a unique option, thus motif elongation is minimal.
In terms of scale change when knitting the extra rows required by 3 colorwork, here is a side by side for comparison 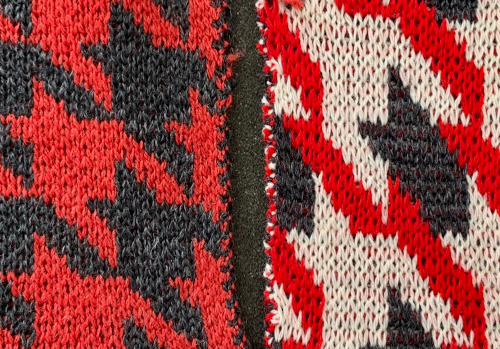 If pixel colors in greyscale are selected with C (3) being white pixels, B (2) the middle-value grey, and A (1) the black squares, placement of yarn in color changer can be planned to match other variations for the design. The visual shift can be quite interesting, the red here is swapped for grey for added contrast, the results can easily be guesstimated in the paint programs used.

More houndstooth designs for use either single or double bed hounds-tooth-fi-variations/, and one for fun, with not every color represented in each design row 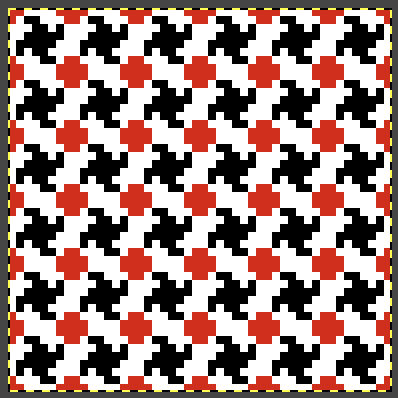 I thought I would return to the repeat that began my whole series on 3 colors per row slipstitch. Here again, colors are represented on every row. Though the working repeat is in multiple colors, I chose to change it to greyscale (3 colors, indexed) in order to plan the location of the yarn in the color changer so that the Ayab prompts as to which color should be used next can serve as a tracking device. 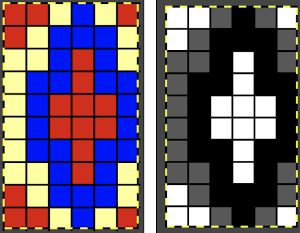 This was the set up in the color changer 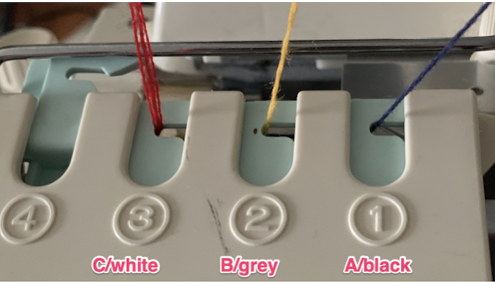 No matter what stitch type is being created, one must remember to program the repeats over the number of needles used. There is a choice regarding its position placement on the needle bed, and numbers are provided as to the start and stop needles for the pattern. Here for a 30 stitch repeat (15 either side max), I used fewer stitches on the left (OK), more stitches on the right resulting in a band of single-color knitting with some issues with dropped stitches. If a border was desired, it is best added as a planned color in the overall tiled motif.

The resulting swatch using the middle color twice ribber option and the above needle arrangement. 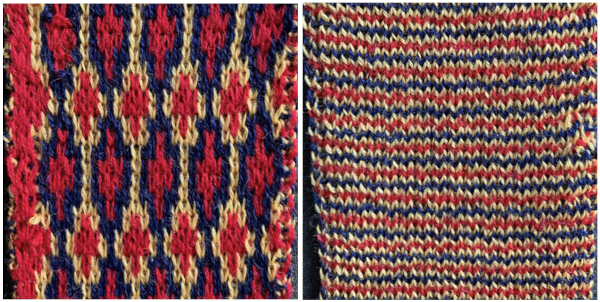 Here it is compared to the swatch knit using img2track and my hand separated repeat, which happened to be also knit at a far looser tension. In both, each color in each row is represented only once, resulting in combination with the lili slip setting on the ribber in the least elongation possible of the original 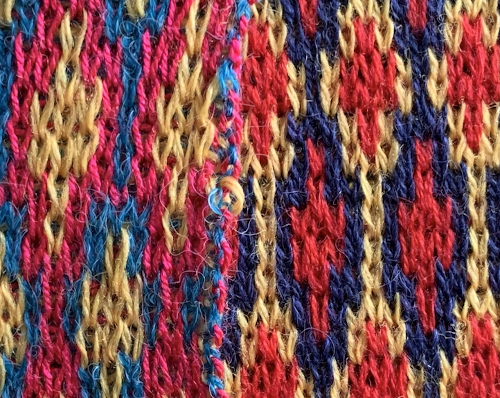 Recently a video was shared on Facebook, it was created by Chris Burge and shows 3 color knitting using Ayab with in addition, a very clever “hack” for knitting DBJ without the use of a color changer, can be found on  youtube