A follow-up to the previous post on the “horizontal cable“: it has a relative that produces a flat or textured “lacey”  fabric depending on the number of rows knit in each segment.
The relative: after some initial rows of knitting (whether waste yarn or edge of actual piece or swatch), beginning with knit carriage on the right-hand side, moving right to left, the knit is created by knitting on a multiple of chosen # of stitches plus needles out of work (OOW, A position). In the instance below a multiple of 9 + 8 is cast on, with an OOW needle (represented by blue) between repeats. The ladders created where needles are in A also make it easier to visually identify stitch groups that need to be moved in/out of work

an attempt at a graphic representation of the corresponding knit

the swatch knit side, orientation as knit 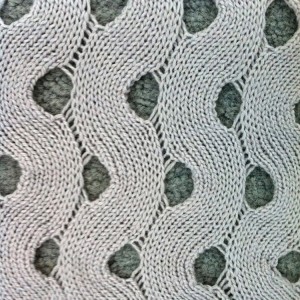 the swatch purl side, rotated 90 degrees as it would appear in a sideways knit 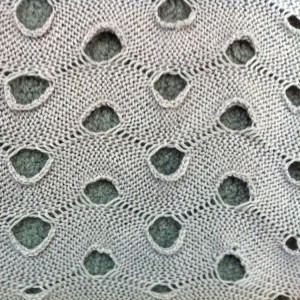 the knit tends to curl along edges to purl side as seen above, could be embellished with stitching for more contrast and color
To knit:
first pattern row:
the numbers in parentheses reflect markings on the last colored image
COR: knit 8 rows on the first group of stitches on the right (1)
push second group (2) into work and knit 8 rows
push third group (3) into work and knit one row
push group (1) on its right out to hold, knit 7 rows across the remaining  16 stitches
bring a new group on left into work, knit one row
bring the group to its right out of work, repeat  process across row
when the second to last 2 groups on left (6 and 7) are reached, knit  8 rows on both,
push the second to the last group out to hold (6)
COL knit 8 rows on the last group on left (7)
second pattern row:
COL: reverse the process from left to right for the second pattern row, begin by knitting 8 rows once more on the first group on the left (9), that first group will now have been worked for 16 rows
The row that picks up the adjacent group of stitches helps create a joined fabric, with movement resulting from the direction in which each “pattern row” is knit.
Varying the ladder space and the number of rows knit will change the overall look of the fabric.
Turning the fabric sideways after varying the size of the holes across the now horizontal rows could also affect the overall shaping ie narrowing and widening of segments.
Going from larger holes on one side to narrower in the opposite will make the knit “ruffle” on the edge with larger holes, etc.
If one knits vertical segments that are 8-16 rows in turn, cutting the yarn at the end of each sequence, then there will be straight slits/ strips that may, in turn, be left as such when knitting is resumed, twisted in a variety of sequences with alternate groups as one would a cable, rotated on their own axis once for 180 exposing some of the back/opposite surfaces of the knit single or multiple times as desired.
A strip of slits may, in turn, be “latched up” in a chain, stitched, or otherwise be altered after the knitting is completed.
A sample with wider ladder spacing and a slightly different sequence. 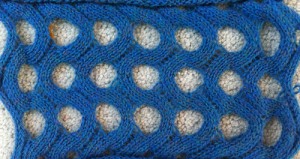 Note that the first row of holes is smaller than those achieved when shaping begins to be reversed. Ending the pattern can be planned to match its start.