Recently I came across a photo in a magazine with what I thought of at the time as an unusual knit leaf. One of my first instincts upon viewing such patters is often to explore whether I might be able to reproduce the knit on the machine more quickly and whether in addition there may be a way to “automate the design” by coming up with a repeat that would work with the use of the lace carriage. I will share some of the many ways to explore such transitions in a series of posts. As written they will specifically apply to knitting on Brother/Knitking/Taitexma brand knitting machines. 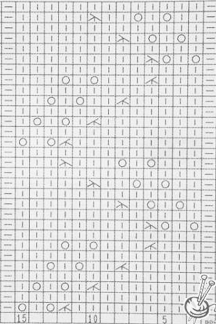 One way to interpret those triple stitches leaning to the right and left in HK is to knit three together for right-leaning, and slip, knit two together, PSSO for left-leaning on RS (“right” /knit side). The same steps on the KM would involve moving around those triple stitches to achieve the correct lean of the leaf edge on the knit side of the fabric. The number of rows for transfers to achieve a similar look makes the fabric impractical to knit using a lace carriage on the KM, so back to hand knitting.

In yet another instance of “it’s a small world” since I first came upon the repeat and began looking for interpretations, I did find several hand-knit patterns on Ravelry and some magazines using the same or similar motif.

The pattern repeat in my first hand-knit sample in a 4.5/inch gauge wool 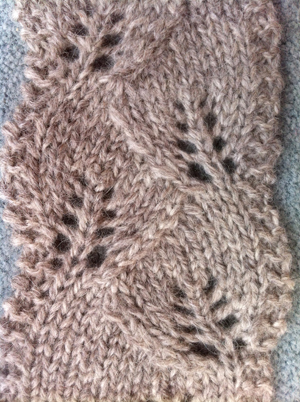 In turn, this led to my developing my own repeat design, which is now on 2 needles, becoming a scarf for my granddaughter, which can be shared in the future.

I work predominantly on a Mac, OS Lion. Last year finally got turned on to using excel for knit design after finding excellent online tutorials such as those by Marnie MacLean and Fleegle’s blog. Over the past week I finally got around to playing with iWork, using Numbers instead of excel, and in conjunction with Pages have come up with final images such as the ones below. Am pretty much flying by the seat of my pants in this, so I can’t really share a step-by-step method but have been pleased with the instinctive qualities of the Apple programs and the results. 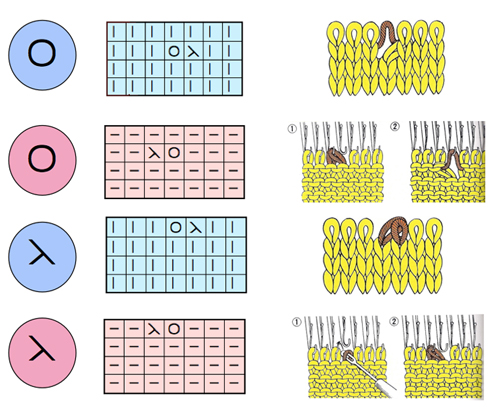 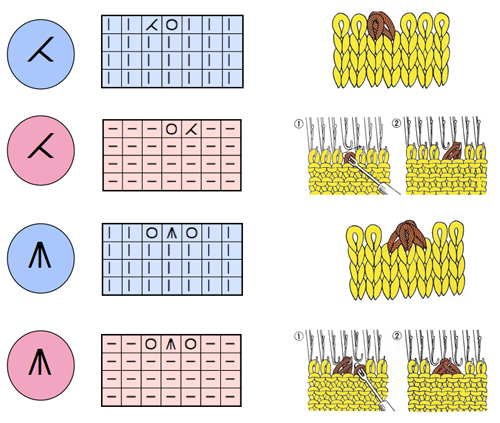 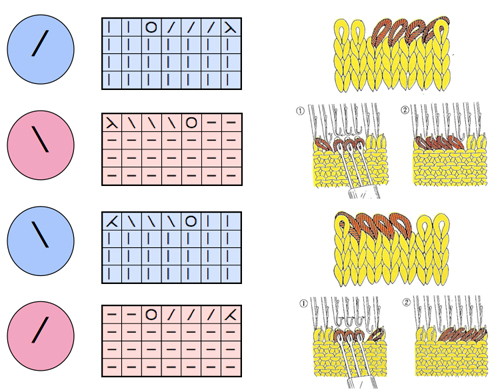 now: starting to play with a hand-knit repeat with the intent of translating it for use on the KM: triple stitches in one location in any single row are eliminated, as well as sets of double lace holes in any single row while retaining the diagonally slanting leaf motif 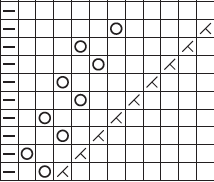 garter stitch will be eliminated by adding a needle out of work in its place, creating a ladder space between repeats; repeat will be adjusted to work within restraints of punchcard limitations in terms of stitch width and row height requirements, more on next post.