What follows is not a formal pattern, rather an illustration of the process I sometimes use to solve needs in my own knitting.

On 2 needles and growing my version of the HK slanting leaves scarf: knit on US #8 needles, yarn is 60%silk and 40% wool 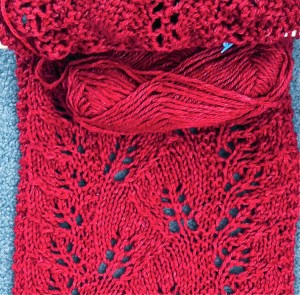 Translating this pattern for use with lace carriage is impractical for a range of reasons.  A beginning analysis of the pattern for possible hand transfer or for development of a “cheating” punchcard  for use with hand techniques is seen below. Numbered circles = stitch placement in repeat where the lace hole needs to occur, the second number illustrates the number of stitches that need to be moved over on the needle bed and the direction of the move 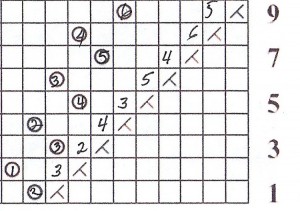 Bunches of these help, the multiple transfer 7 prong tools were made and marketed for Brother, Studio, Empisal (4.5mm), and even Passap at one point (needle space on Passap is different, they also had a wider range of transfer tools than those for Japanese KMs)

tools of the trade in required transfer configurations 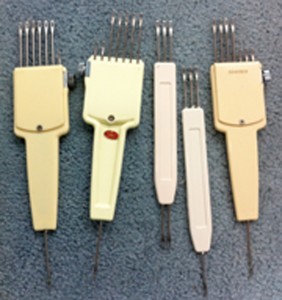 sample knit from looking at a graph 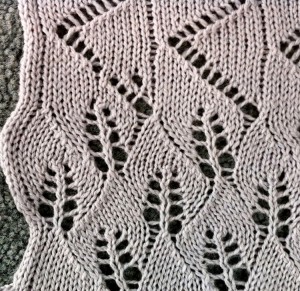 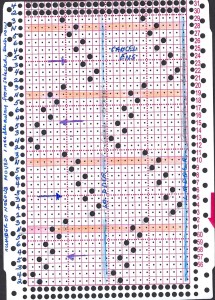 Numbers on left show how many stitches need to be moved to create the hole in the place where the needle is selected; they do not reflect design rows directly, since the card is read seven rows below eye level; large arrows indicate direction for moving stitch groups, with the horizontal colored stripe showing the beginning of each new transfer sequence; vertical blue rows show placement for needles out of work, and the resulting ladder. The garter stitches in the hand knit have been eliminated.

The above card worked, but if one has a bulky, limited prongs on transfer tools, or short attention span an even easier approach might be to have all needles placements required for move on each row selected 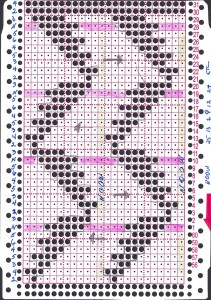 Now come attempts at a possible border trying to “match” top and bottom of knit: would prefer not to have  to deal with issues of mirroring in center  vertical and  horizontal axis of scarf to get top and bottom to “match” . There is enough else to track.

not liking the size of the ladders 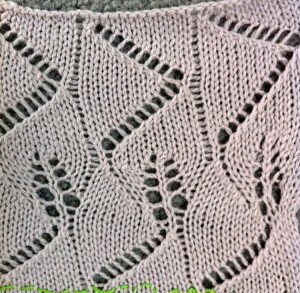 The swatch below is a bit closer to “like” and to eliminating the ridge at the center of the “triangles” that is formed if transfers occur in the usual manner and “hole” is then filled in with a purl ridge to eliminate it. The “ladder line” below is marked, showing results from different attempts to fill in the empty needles resulting from moving the stitches. Top and bottom edgings are created by chaining as one would do a chain stitch cast on, behind the knitting on the needle bed, in front of the knit side of the fabric. If knit on the bulky a garter edging could be hand knit first, placed on the KM, the piece knit in turn, then taken off onto HK needles again for adding garter stitch rows at the other end. 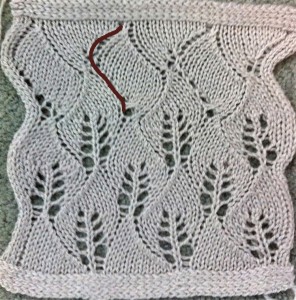 Getting closer to goal: ladder space more uniform, “linked” border rather than chained one above, still need to sort out how many repeats without the leaf lace “veins” to work at top and bottom of “scarf 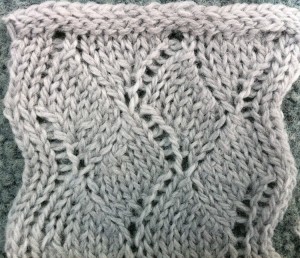 HK and MK variants of leaves may be found in a variety of sources. Some HK samples include a twin leaf verion. A very quick sketch of a possible adaptation for use with punchcard development as described above, using the 24 stitch repeat limitation, red = NOOW follows 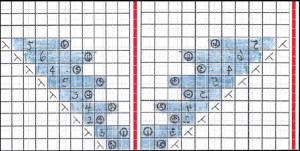 one trouble spot: Row2, where 2 holes line up one on each side of the “ladder”