My previous post and a few others addressed some of the issues in knitting lace and the differences between machines. In this instance I am exploring the use of cards that are designed for transferring and knitting at the same time. In machines such as Brother lace is the result of using 2 different carriages. 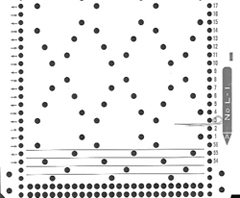 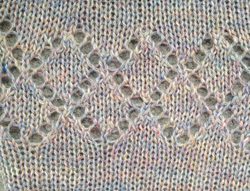 cancel end needle selection on knit carriage underside if possible or push end needles back manually if needed to avoid their corresponding stitches being transferred throughout the piece; set up for knitting the pattern as usual, punchcard row 3 (marked in pencil) becomes row 1 of the design when the above card is used in brother machine; the arrows always indicate the direction the lace carriage will move across the knit to make transfers in the direction of that same arrow

begin pattern knitting with COR, card locked, change knob on KC, needles will be selected  for transfers moving to left

(lace carriage) LCOR moves to left transferring, and is released off the machine (same needle selection appears, but those needles are now emptied of yarn)

LCOL: makes transfers in direction of arrow, and is released

these steps are repeated throughout the knit, with the knit carriage knitting and selecting, the lace carriage following its selection to make the required transfers

if there is no pattern needle selection with the KC pass on any row(s), continue to knit until there is needle selection, and begin process using lace carriage to transfer in direction of arrow now in view above card reader, and once again releasing it after a single pass

a caution: hesitation and reversal in movement of carriages in Brother machines advances the card in the reader, and results in mistakes in patterning; if errors are to be corrected or such movements need be made for any reason, it is worth locking the card, checking row numbers, remembering to release the card before continuing, and visually checking pattern after the next knit row.