A larger cousin is in the works using the slip stitch setting combined with holding to create an “entrelac like” fabric. It helps to be familiar with both techniques before attempting this fabric. I am not providing specific directions for knitting, but the repeats are correct and tested, and are intended as a springboard, not a “how-to”. 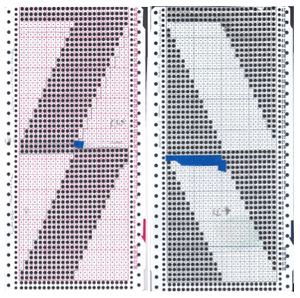 The needle bed markings to help track motif placement (red for the red card, which corresponds to needle tape factory markings for repeats, black marks are halfway in between for the opposing shapes)

As each set of repeats for each card is completed the punchcards are exchanged. KC direction is marked on them, with knitting beginning on the opposite side. I found the fabric more manageable when I completed and began each design sequence and color change by beginning and ending with an all knit row in that color. The bottom of the swatch shows the difference in the side edges if half repeats are not planned for. If this were a production item it would actually be possible to work out the repeat on enough cards so they could be used as a continuous roll rather than having to so frequently reinsert and rejoin them. This sample was knit in Jaggerspun wool, and since wool has memory, the resulting 3D texture remains after steaming, resulting in a noticeable difference from the previously knit acrylic swatches. 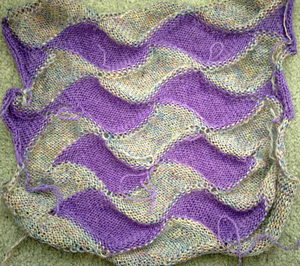 and the knit side 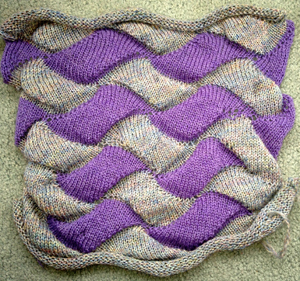 There is a large number of rows between repeats, so there will be yarn ends that need to be dealt with, but they are far fewer than in knitting individual motifs, and only at the sides of the piece.