“Pinning” has become part of my daily routine. This image was pinned by someone else, and brought back memories of my block stitch scarves, along with the temptation for working out a new repeat, similar to that seen in the top of this jacket credited to Forquet. 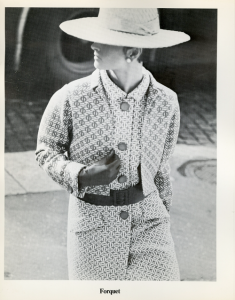 Following are some ideas for developing designs for these fabrics, the basic principles work for both punchcard and electronics. Using the motif in a punchcard will make the striping surrounding it fixed, and involves a lot of punching holes. On a mylar or in a download the width of the ground behind the shape can be easily changed, and only the non selecting, “empty ” squares need be drawn or entered into a program that is capable of color reverse. One needs to be mindful of the size of the overall repeat when faced with so much “blank space”.

Until one sorts out what happens with the stitches, where the colors are placed during knitting, it is a good idea to start with a simple shape. I use excel as my “graph” paper when I want to easily play with color on a grid. Below is a simple motif as a design start, beside it an expanded graph leaving every other row blank. Some books suggest erasing on horizontal EOR stripes, I prefer the visual cues in the method below. The yellow marks the rows on which the motif will be created. 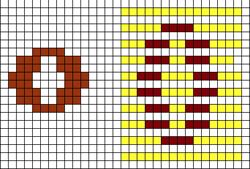 There are a number of ways to go on from this point. Layering the repeat on a colored ground can give a sense of the resulting shape, help plan the type of overall pattern repeat, and ensure that enough rows are allowed to travel to and from the color changer. For sampling I prefer to work on an electronic machine, using the elongation feature and color reverse to minimize drawing in lots of black squares. The grid on the left shows the above split motif layered over a striped ground. In the center grid, the motif separation color becomes white/ blank, color one (yellow) is different than on left simply to allow the white to become more visible. I use 2 carriages as opposed to the color changer when knitting these fabrics, so the L and R row markings help ensure that indeed there are enough rows in the repeat for both carriages to travel to and from each side, with stripes lining up where required. The blank squares represent slipped stitches, and they normally are left blank whether, in a card, mylar, or program, all other colored squares are knit stitches, corresponding to punched holes, black squares on mylar. On the far right is all that is required to be filled in with a mylar sheet or program capable of lengthening X2 and color reverse. The marks are actually the same as the expanded motif first shown above. For a punchcard, the same motif on the far right could be drawn this way centered, and every other square surrounding the now black lines would need to become a punched hole.

Looking at the graph: color 2 will slip in locations where needles are not selected (white squares). The stitches on non selected needles get longer in the front of the fabric, the alternate color floats behind them. The next color change will knit the held stitches off, so the motif color in the above design will actually be “green” in the final fabric. Because the colors on either side of the motif are actually knitting every stitch and every row, there will be some distortion in striping around the motif, and potentially even some “bubbling” in those areas

The next choice becomes sorting out how far apart to place motifs from each other, and in what distribution on the resulting fabric. Both are subject to personal preference and taste. Below is only one of many such possible layouts 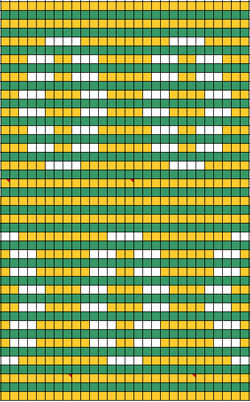 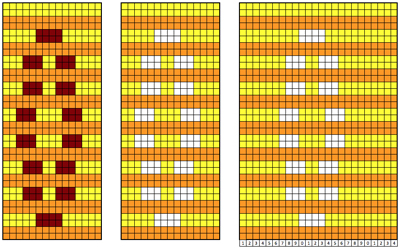 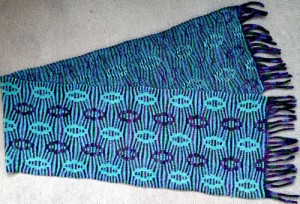 The following chart illustrates the idea: the magenta stripes are not part of the repeat, they are markers to show where the slip stitches for the alternate color need to occur in the repeats 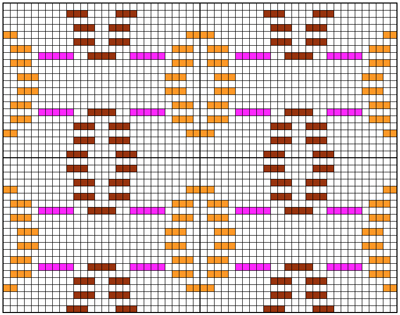 As for the motif that started this thread: below is the test swatch so far, obviously in a different gauge and repeat, but in the same spirit. An issue is the long float on the back/purl side spanning 8 stitches. If the goal is to produce an unlined item, this could pose a problem in wearing it. Hooking up the floats may be too time-consuming in production, an added stitch in the non-motif color (see marked dots) on either side of the central bar may solve the problem, but alter the design. There is lots more to consider and play with (yarn colors in these swatches are chosen for throw-away tests, not any type of final item) . 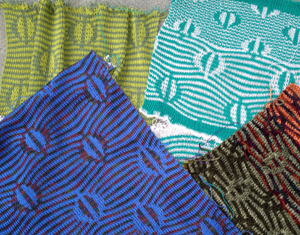 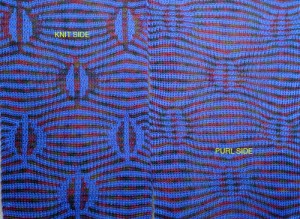 The top and bottom edging to be worked out; the fabric is soft, drapes well, and has no side curl.