I reviewed and edited this post in mid March 2019, with plans to add a part 2 post on use of llili buttons when I am able. The content here explores one of the possible lili settings, where slip stitch is used in both directions for every other needle pattern selection on the ribber.

If one chooses to hand manipulate needle selection on either bed, bringing needles to be knit out to hold with the carriage in use set to slip, one can make knit stitches happen wherever one chooses. Automating any part of the process speeds things up, but comes with built in KM limitations. lili buttons enable every other needle selection on the Brother ribber carriage, behave in the same manner as when using the following card single bed. 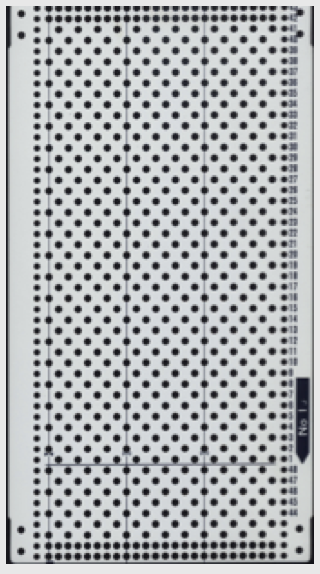 Another way to look at it, showing the isolated smallest repeat bordered in red on the right side, and action on needles in work on the ribber, K for knit, S for slip. Movement of the carriages shown is from left to right and back to left, the color changer side

The usual rule when working with lili buttons and slip <– –> setting is to have an even number of needles in work on the ribber bed. The markings on the corresponding needle tape consist of dashes with spaces between them. For an even number of needles, if the first needle is positioned over a dash, then the last must be positioned over a blank space. The charts below take into consideration duplicate rows, knit first away from, and then back to the color changer resulting in striping every 2 rows. Patterning is fixed, beginning with second needle from the left when traveling from left to right, and second needle from the right when traveling from right to left. The second needle in each instance knits. This is true whether one starts on a “blank” or “dash” needle tape position. With an even number of needles in use, needles in work begin and end on opposing symbols in pairs ie dash and blank, or blank and dash

Dashes and spaces on the needle tape are shown in the yellow row in chart with first needle on a “dash”. Needles (colored squares in repeat) are numbered reflecting the sequence in which they are knit as the ribber carriage moves in the direction of arrows.

If an odd number of needles is in use, the same needles will slip/knit respectively. Grey squares represent the needle location for which the ribber carriage thinks it is selecting, including the missing needle location to keep the number of stitches even. Unless settings are changed patterning is fixed on the same stitches.

To create vertical stripes using slipstitch, this would need to be the repeat, not “automatically” possible on the ribber

The card that is being imitated is card one elongated X2, here shown in the studio version 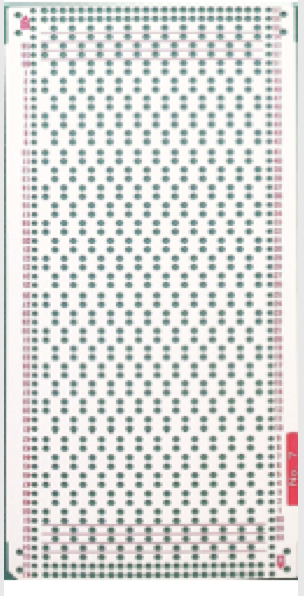 “Fooling the machine” into thinking a continued number of odd needles are in work is achieved by bringing an extra needle in work con the ribber carriage side on left, and then right in turn on the carriage side, or one empty needle on each side at the same time. The knitting happens on the needles represented by yellow squares, but the carriage thinks it is knitting the pink repeat

Odd needle set ups begin and end on the same symbol ie. Dash or blank on the needle tape, in this case the “dash”

If extra needles are brought into work with a starting even number of knit stitches, each 2 passes produce a single row of knit with alternating slipped stitches, resulting in a narrow stripe alternating with small checks, or plain stripes in each color on the fabric backing. Again, the movement here is away from and back to left side 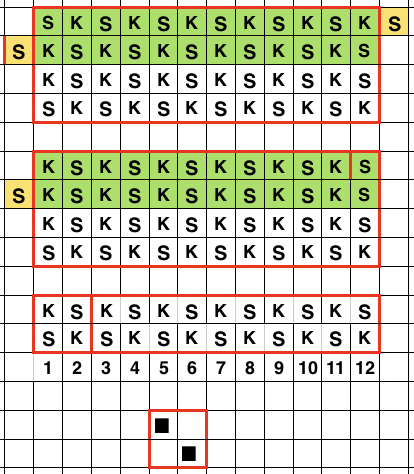 The overall design is interrupted by knit stripes, depending on whether one or 2 extra needles are brought into work, here is one sample 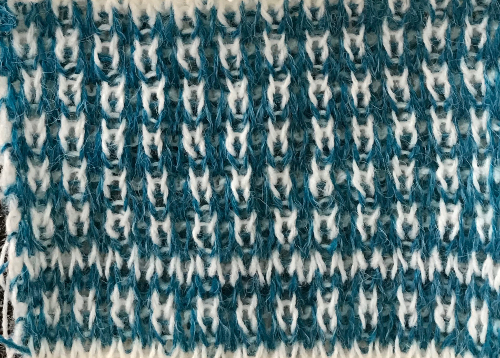 Working with an odd number of needles on the ribber 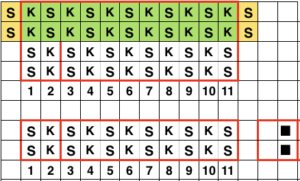 To knit: *COL (carriage on left): color 1 knits to set up base in pattern for 2 rows, ending on color changer side. Before knitting with color 2 COL, bring an extra needle into work before moving from left to right. Knit one row. COR: drop the extra empty needle on left OOW, bring extra needle on right into work. Knit to left returning to color changer, drop extra needle on right OOW, change colors* repeat * *process throughout. Check regularly to make sure that extra needle does not become an unintended increase. Having an extra needle in work on both sides of those on the ribber on the main bed will insure end stitches knit off and side edges are cleaner, with less noticeable elongated stitches on each side. It is possible to bring up the pair of empty needles for color 2 at the same time. In my experiments I have found that if the needles in work on the ribber begin with a dash on the left, I had regular loop formation on the empty needles when using slip stitch. This did not happen when I began with first needle on left beginning with its placement on the empty space between the dashes on the needle tape.

Loop formation that requires their release before continuing to knit:

The fabric swatch from the original post illustrates the vertical striping. The thin yarn clearly shows the lengthening of slipped stitches, and why some DBJ fabrics are referred to as “long stitch” ones, with color bleed or grin through from colors traveling behind them. The plain rib at the bottom is significantly wider than areas where slipstitch is used, an issue if plain rib is to be combined with DBJ created with slipped stitches. On the knit side in this instance, the fabric is knit stripes. When using the color changer starting with waste yarn and testing yarns, gives one the opportunity to make any adjustments necessary including on occasion doing a bit of metal bending where needed. 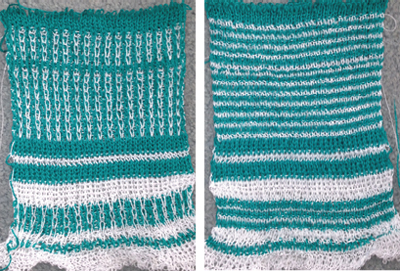 A subsequent proof of concept for inclusion in the later post 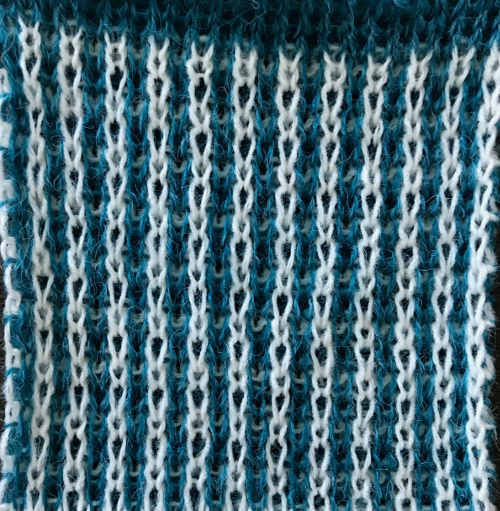 It is also possible to work with the same approach, using tuck settings. A first experimental test 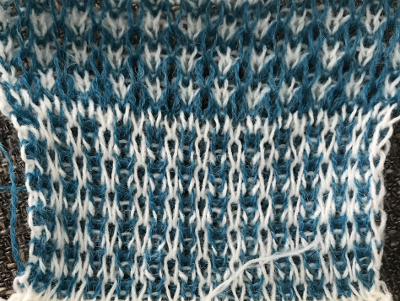 lili buttons may be used with needles out of work when using thicker yarns, or for the resulting effect on that side of the fabric. A vertical stripe in that instance produced with hand needle selection on the ribber bed 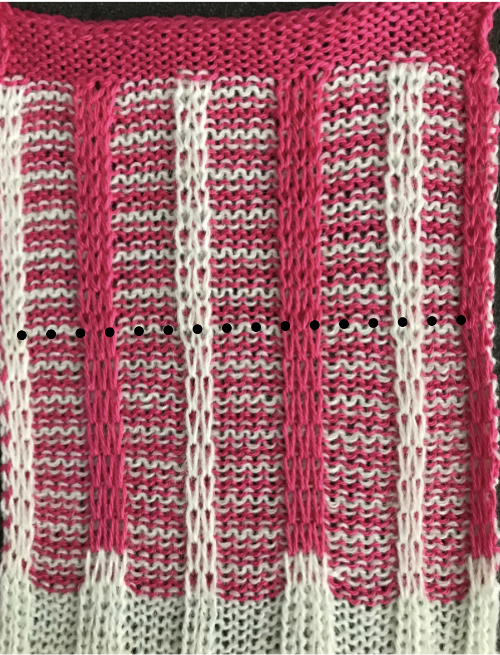 Lastly, here is a tiny swatch in an arrangement beginning to explore odd number of needles in work on the ribber in conjunction with use of lili buttons, and adding needles to “fool the machine” as described above 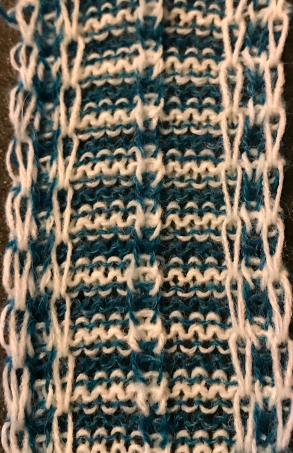