One bit camera “snaps pictures in digital retro style. I began this tale with a partial shot of my face. The app apparently is no longer available via US App Store (11/15/2017) 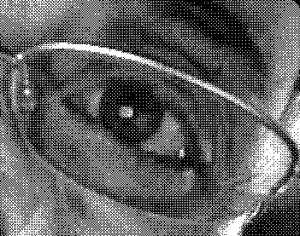 The old bag of tricks did not produce an image I was happy with, I finally used Ggraphicconverter Picture_Mode_ Bitmap for my downloadable file

Migrated from Mac to a PC laptop, opened in WinCrea, the image repeat was downloaded to Passap, program tech 179. The bottom  of the swatch is knit single bed LX (slip stitch), the top is double bed, back bed set N/N, same tension throughout, the middle stripes are operator error in forgetting to make the lock change to LX on the front bed; the gauge is significantly and obviously different 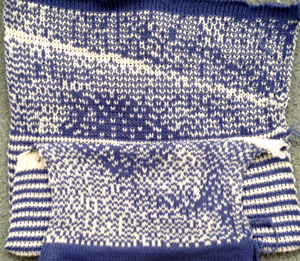 Moving on to a birds’eye backing, the bottom starts the pattern with dark color, top with light (another operator error and a reminder to keep notes even for what may seem obvious); the black is slightly thinner than blue resulting in a change in gauge once again 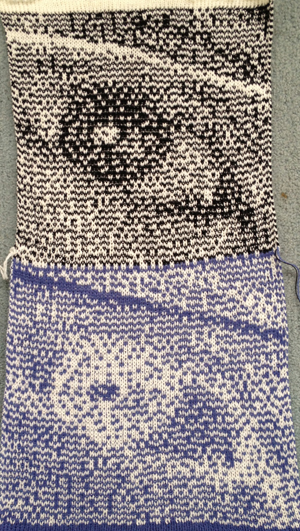 The bouncing gauges certainly indicate some of the problems in maintaining aspect ratios in representational knits. The best solution may be to do a large swatch in the planned technique that is at least 100 sts X 100 rs in chosen yarn and then adjusting image aspect ratio before knitting the final piece, which in turn may be better done before conversion to final BMP and require repeating the process from its beginning.

For separations such as technique 179, and those by default in Japanese machines for 2 color DB, images must have an even number of rows in length. My original image crop was 73W by 85L pixels, so I had to shorten it by one row, which was actually achievable within WinCrea. The single bed FI swatch measured 7 inches in width, the double bed ones 12 inches at their widest point.

Last but not least, here is my friend Rocco processed via Hyperdither, Mac to PC, to WinCrea, to Passap and knit 150X150 pixels/ stitches 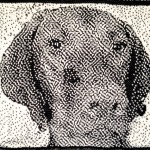