Continuing with the “relatives” of the proposed border chart in the previous post, this gets us even closet to the hand-knit. So, I have a punchcard, a 12 stitch repeat, really want to go 14 wide for the repeat, and now several other issues are encountered. If one thinks about lettering and controlling horizontal direction with a card, one is reminded that the card “knits” the image ie a letter as punched on the purl, back of the fabric, so when the knit side is viewed, letters are mirrored. One solution is to flip the card over horizontally. If when knitting from a hand-knit lace chart the transfers need to be “flipped” to match results, the punchcard does that for you. With the 910 what you see on the mylar is what you get, so if the repeat is drawn for lace as for a punchcard, it will need to be flipped horizontally. Punchcards are sectioned in blocks of 6, mylars in blocks of 5, so if copying a card it may be worth printing it out large scale, and outlining new blocks 5X5 so as to be able to orient lace markings correctly within them.  With electronics one may have built-in functions for mirroring in either direction, I went another route:

This is a section of my mylar with markings for repeats, the blue outline for the 14 st, the red for the 12, suitable for punching on a card.  The first K2Rs reminder may be seen  in the column on the far right, the colored squares and numbers indicate the programmed repeats for each sample 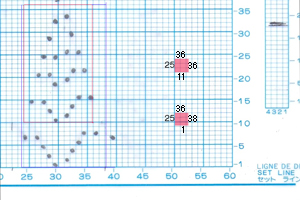 the wider and longer repeat (with an unintended dropped stitch),  which would create more of a curved edge if used as a border

“putting this one to bed”