this method works for studio simple lace patterns, wherein a single pass the stitches are both transferred and knit. There has been information published on using Studio punchcards on Brother punchcard machines using the KC to select, followed the LC, each making single passes. My two previous posts on the topic: 2011/05/18/lace-cards-use-on-the-brother-260-bulky/ and  2013/03/17/studio-simple-lace-punchcards-used-on-brother/.
While working out yet another HK to MK lace pattern, I sorted out the following method for using Studio simple lace on the electronic KM. It is a method that does not work on the Brother punchcard to produce the same fabric, however; on punchcard machines, as either carriage is moved to select from the opposite side of the bed, the card will not advance on the first pass, interrupting selection. I tried a swatch and got a very different lace design; depending on the starting pattern the results may be interesting (do not use elongation), but not the ones intended to match any original.

The knitting samples shown below were knit on a Brother 910. On electronic machines, as seen in previous posts on knitting with 2 carriages, the mylar (or otherwise programmed) repeat advances a row with each pass of the carriage, no matter on which side of the bed the pass originates. Dropped stitches are harder to repair in these fabrics than in patterns for multiple transfer lace (there knitting can be unraveled to the start of a sequence where 2 or more knit rows usually occur), so checking transfers, gate pegs, and adjusting stitch size and weights matter even more. There is no need to mirror the image horizontally; draw repeat as is on punchcard onto mylar

program pattern double length
on the first row the LC selects, the next row it will transfer; LC always makes 2 passes toward the KC, even if those 2 rows in repeat have no needle selection, and is removed from bed to be returned to the bed on the opposite side after the knit row with KC that follows
KC knits a single row to the opposite side
LC is placed back onto the machine opposite the KC to make 2 passes
KC follows with a single knit row, and the last 2 steps are repeated
3 total carriage passes complete one row of knit
the chart below shows the actions and placement of carriages 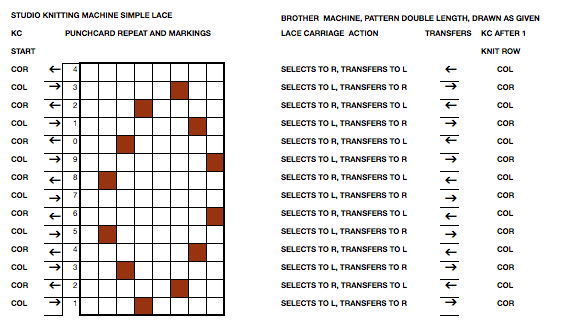 this sample was knit beginning with lace carriage on left, as can be seen in marked areas, the alternating repeats have a different quality in the sets of transfers marked red vs green 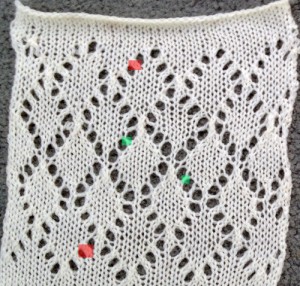 the “successful” swatch knit beginning with KC on left, LC on right in the method described above 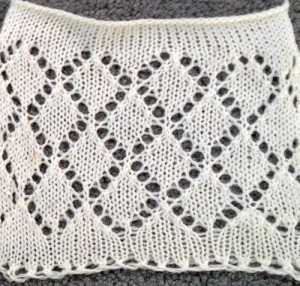