Mock filet crochet machine knit lace has surfaced in a Ravelry blog of late. The sample in question was made by Tanya Cunningham, using a hacked knitting machine and software to download the repeat. Sometimes punchcard machines or early electronic users feel left out of creating particular fabrics. If one can settle for working with simpler and far smaller repeats, however, one can achieve interesting results on that scale.  Several years ago I wrote a series of posts on lace meshes and lace patterns inspired by filet crochet. They are interspersed in the mesh category. There also has been a thread lace Ravelry “thread”, and today’s avoidance of housework led me to think about pre-drawn thread lace patterns to create a filet-like mesh.

What to look for a first experiment (Brother machines only): large unpunched areas creating motifs, with no side-by-side punched holes, and no more than 2 consecutive punched rows. Some samples are provided in-stock cards that come with machine purchases. One such 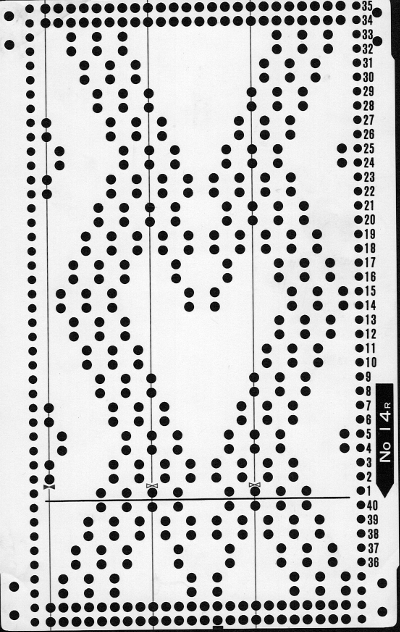 The lace carriage (LC) selects on the first pass, transfers on the second. It advances the card with each pass of the carriage if it is operated consistently from the same side. If 2 knit carriages (KC) set to select needles for any technique are in use in punchcard machines, as one is put to rest and the other one begins to move from the opposite side, the card does not advance on the first pass, so selection for the previous row is repeated one more time. If all lace transfers are made in the same direction the resulting fabric will bias. For balanced lace fabrics, the direction of the transfers needs to be reversed, whether in alternating series of rows or with every other set of transfers. In a situation such as this, the LC makes one set of transfers operating from the left, with the next set of transfers operating from the right. For the correct setup, the first-row selection with the card is made on the row just below the one marked #1 (in this instance that would be row #40), then the card is set to advance as usual. If the first selection row is made with the card set to below the #1 line, the card needs to be already joined with snaps into a drum or the card reader will be selecting the all punched row which is normally part of the overlap that sits over the last 2 rows of the pattern repeat.
I began with my LC on the left for transfers to the left and alternately placed it on the right after knit row(s) for transfers to the right. A “simple” lace is produced with only one row knit between transfers, a more complex lace if 2 rows are knit between them. The LC moves left to right, transfers back to left. If the knit carriage is used for one pass only, it stays on left. The LC is now taken off the machine and moved to the right, used for 2 rows, and will be removed from the bed to ready it for its return to the left side. The KC follows with one pass from left to right. The LC is returned to left and operated for 2 rows, starting the sequence over again. The LC is always moving toward the KC to select, and away from it to transfer.
Brother knitters are used to knitting 2 rows after lace transfers. It can be done with this card as well. The problem here is that when knitting for 2 rows, the knit carriage consistently returns to the same side so that when transfers need to be made from its starting side with the LC, the KC needs to come off the machine until after transfers are made. There is a lot more juggling of carriages and keeping track of what needs to be where. The elongation that occurs with 2 rows knit after each set of transfers, and the differences in the appearance in the yarn forming the eyelets (single/magenta arrow vs crossed/glow green arrow strands) for the respective methods are shown below. 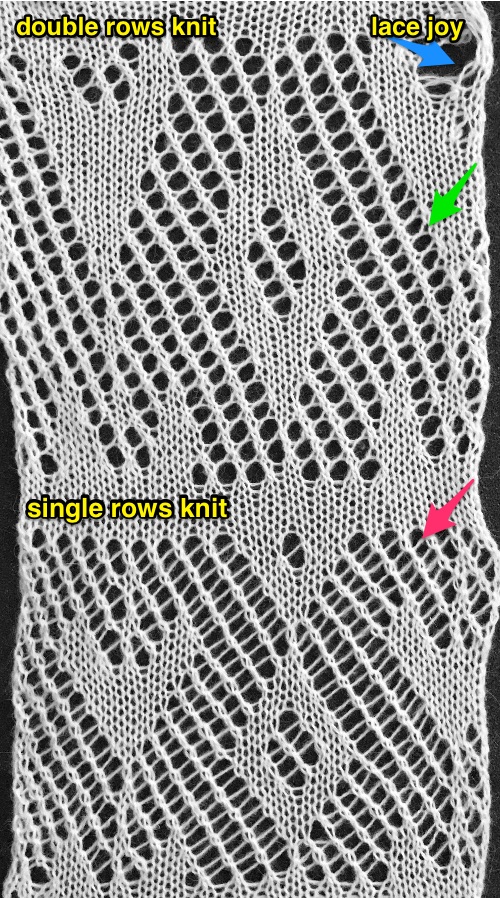 Three more candidates for experimenting with the technique 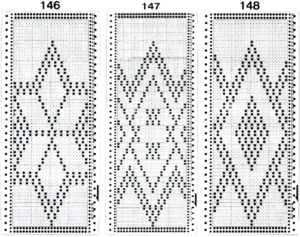 Working the fabric on an electronic, the repeat used:

If working the same repeat as transfer lace, the knit carriage moves to and from the right with every 2 rows knit, so in order to make transfers with the LC to the right, the knit carriage needs to be moved off the needle bed for the LC to be able to operate from that side. The process is a tad fiddly, if the technique is to be used for an all-over design, converting the design to the traditional transfer lace format would be worth the effort. Barring that, some sort of note-taking to serve as a reminder of which side the LC carriage should operate from is also be helpful. 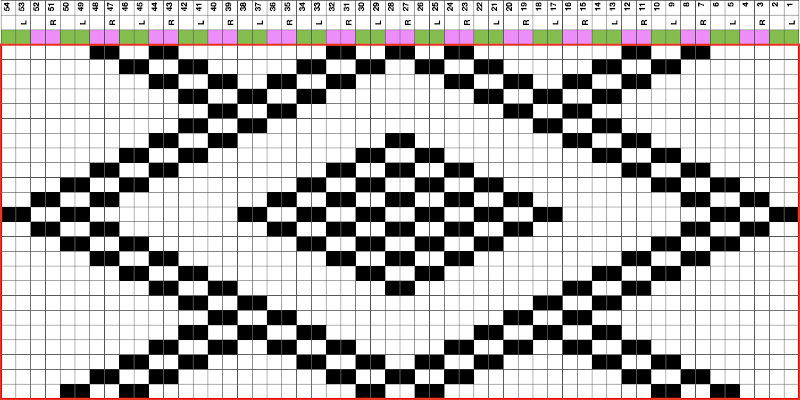 Returning to another Brother punch card, more possibilities in ways to experiment 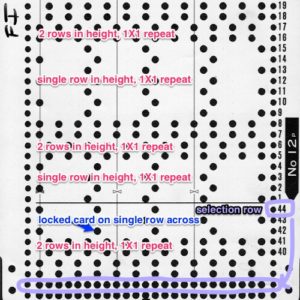 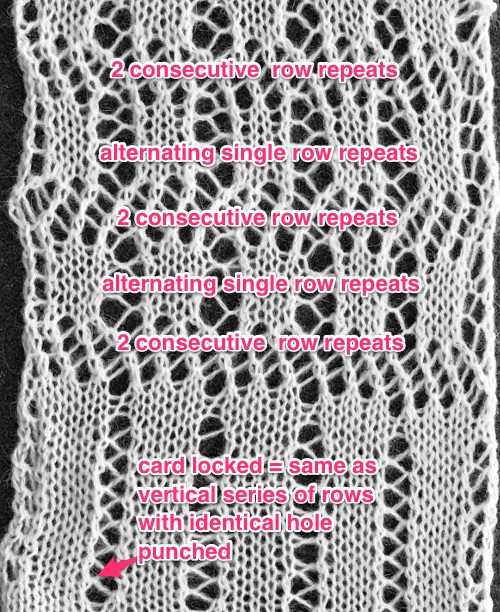 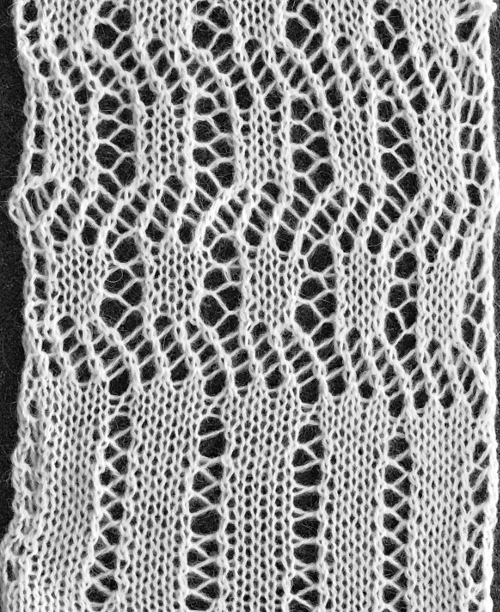 The above shows long vertical lines of transfers are possible in design motifs (punched holes). Adding shapes to all over mesh may require some editing along edges where the shapes meet the mesh. Varying size swatches are recommended before committing to any large piece. As always punched errors may be taped over. Red squares in the image below reflect holes missing in the card if the goal is to achieve a smoother circular shape. When this technique is used, selection, transfers, and knitting occur in each single, completed row of the design. 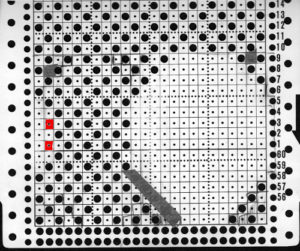 note the differences in circle sides 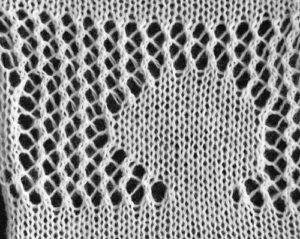 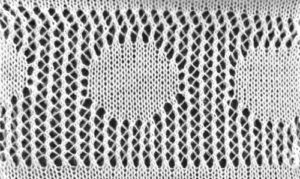 The slight bias zig zag at the top of the swatch results from a missing reverse direction transfer before continuing with plain knitting and binding off. Ultimately whether the final fabric is worth the effort in making it is a personal choice. Sometimes small swatches work like a dream, and when large pieces are produced, problems multiply or the result is disappointing. In the past, I have also tried to use thread lace-inspired patterns for drop stitch lace (ribber fabric), but have found the result far more subtle than expected. As always yarn and color choice make a significant difference. The yarn used in these samples is a 2/15 wool blend, knit at tension 6.

BTW: Studio pattern books have multiple sections of published 24 stitch thread lace patterns. Not all Brother machines have the capacity for knitting this type of fabric, so not all of their publications include “suitable patterns”. If one understands what punched holes vs unpunched do, some of the Brother weaving and “pick rib” (perhaps another post’s topic) can be used as-is or adapted.
electronic http://machineknittingetc.com/knit-in-punch-lace-silver-m…
punchcard http://machineknittingetc.com/pattern-library-for-punchca…