Holding/ short-rowing is used to knit each wedge. The basic rule for holding is followed: stitches are brought in to work on the carriage side, and into hold opposite the carriage to avoid floats. The greater the number of sections, for either the full circle or a donut, the smoother the curves at the outer circumference, as can be imagined in the form below, which divided into more sections than those 5 in our original calculation. 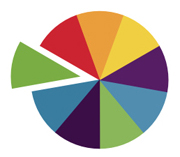 The pie slices” begin and end on open stitches, ultimately requiring a join where the radii meet, using whatever method is preferred by the knitter. Assuming the knit carriage is on left and set for hold in the diagrams below if all stitches are brought into hold except 1 on the carriage side (or number required by calculations for the individual piece), 2 rows are knit, and action is repeated until all needles are in work, the following shape starts to fill in and a miter with pointed edges is created.

If all the needles are in work, and one begins to bring them into hold opposite the carriage, one begins to fill in the shape creating the form below, and a spiral is created, with circumference edges more rounded.

Like shapes may be stacked sequentially. If shaping at the top of the initial triangle wedge is reversed, however,  the following begins to occur.

Knit rows in between the triangles begin to create larger holes in the center of the pie, and a donut occurs. The donut center can be varied, the knit rows between triangles increased to suit. The illustration below shows some of the variables. The plain knit rows are another factor in smoothing that outer circumference. 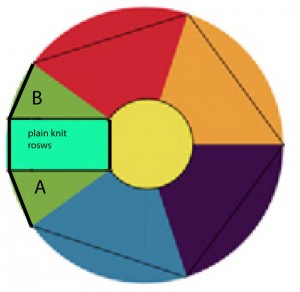