Working back to the repeat from post # 3 on this subject, I returned to the drawing board and edited the separations.  Tetris is a tile-matching puzzle video game originally designed and programmed by Alexey Pajitnov in the Soviet Union. The objective of the game is to manipulate tiles, by moving each one sideways and rotating it by 90 degree units, with the aim of creating a horizontal line of ten blocks without gaps. The principle at use for the separated “squares” shapes is to achieve the same result for each of color separation groups (highlighted by dark borders in the charts), by moving them up and down, or changing their positions in the color sequence. The first method (beginning with only one row of ground color) has eluded me in terms of an “error free” result. More than one version consistently in a missing single stitch of color. The latest method shows the problem color “tiles” marked in dark ovals. The column on left is the original separation, A shows the juggled colors, B the pixels, squares, or punched holes for the repeat, and the far column on the right shows markings that may be used to track the color change sequences, which may be transferred to punchcard, mylar, or for any cues in change of sequence your program can provide. The swatch approaches the original intended design far more than any of the previous attempts. It is expected that the background color will be the majority or main color of the design; it gets separated out as first color. By splitting the knitting of most of the needles to the beginning and the end of the sequence (japanese 2 color default) this way, one supposedly eliminates the chance that the needles knitting the second row of each color will knit over, blocking a space yet to be knit in the first row of the design by a color that has not yet been knit. In this small pattern no colors knit more than 3 consecutive stitches at any one time. With some motifs the final alternative is to redesign the motif. 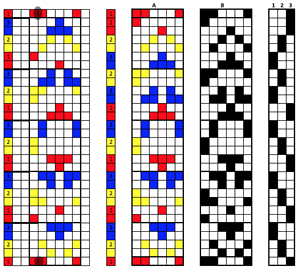 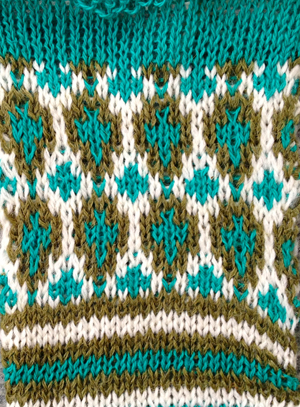 Using the alternative method for decreased elongation of motif upon knitting, here are the working charts for beginning with 2 rows of color 1 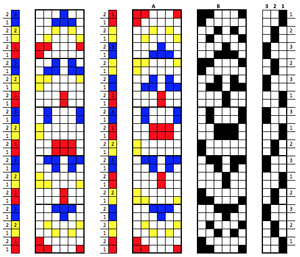 the swatch: got it! 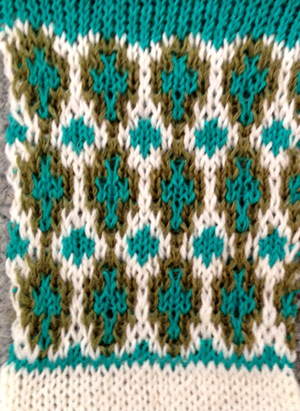 A&B show my marks corresponding to color positions in the color changer, the first 3 repeats on left are the ones used to knit  the swatches. Separations are suitable for DBJ, but I chose to knit trials in single bed slip stitch.

One thought on “Double jacquard separations 4_ making them “work””