I began to think about color separations again, in reference to pile knitting and returned to the chart used in the circular shape in the #1 blog post in this thread. While studying it, it occurred to me that the fabric might be created by releasing the stitches at the end of the knitting. Brother punchcard books (now downloadable for free online), at the back, usually had a page with “lace-like patterns by KR” illustrating some of the possibilities in what I have been referring to as drop stitch lace. Once again, all stitches are transferred to the non-patterning bed. Selected needles whether by hand or by the machine, are in this instance, not released until the very top of the piece is reached. In long pieces of this type of lace, I find dropping stitches at regular intervals rather than waiting until the end helps things run smoothly, and gives one the episodic opportunity to evaluate proper stitch formation, to move up weights, etc. I found in my first swatch my inexpensive grey wool was really sticky and kept trying to knit with the white after the color was changed, explaining the mess on the left of the purl side image. Also, it pays to have some weight on, or at least to keep an eye on, the color changer side. As yarn colors are carried up (every 2 rows) between color changes if they are not long enough they will pull in the fabric on that side. If the end product is to be gathered at one end i.e. in a skirt, that could be an asset, but not so if the intent is to have it lie flat.

The pattern is programmed beginning on a row with black squares in it, ends on a blank row. The selection row in this instance is done from right to left (toward the color changer), the next color is picked up, and the process repeats every 2 rows. At the desired height I like to have the ribber knit the last row on only its needles before the stitches on the main bed are dropped across the width of the knit. Tugging on the comb and weights will speed things up. The fabric grows significantly in length, so watch where those weights are headed.

my first try, purl side 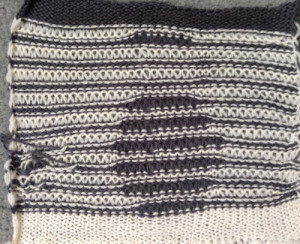 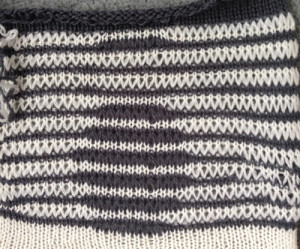 Along with changing the “nasty” grey yarn in the next swatch, I moved the knit further away from the color changer, and things went very smoothly. If where the repeat is placed in the knit matters, however, then the needle bed would need to be programmable as well to change the center needle position 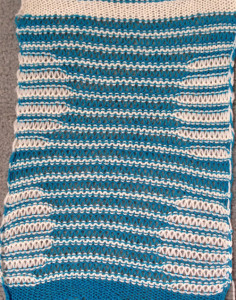 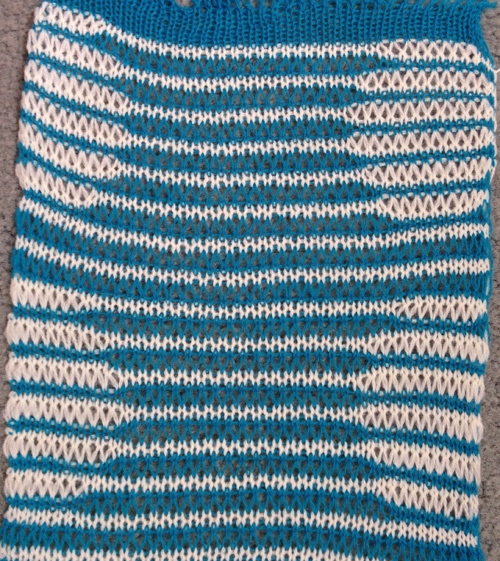 the illusion knit inspired method of charting and working the released stitches does not work for this technique, the result is simply very large, striped, single color per 2 rows, loose stitches 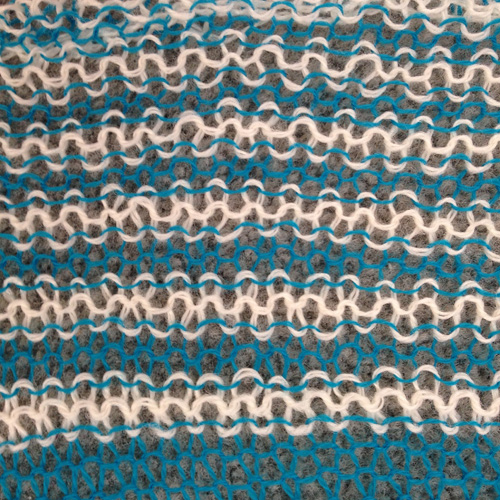 End release does not work in every design. Sometimes in long pieces, portions of some rows will simply not release,  fuzzy yarns may result in the same. In addition, if long stitch shapes are distributed on knit striped grounds, the release needs to happen at a minimum when the top of each shape is reached. A sample with drop-stitch interrupted by all knit rows and with only one color released 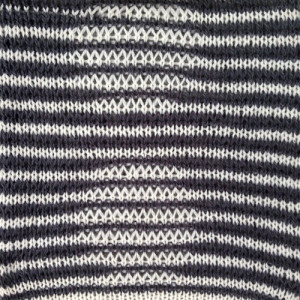