Gauge swatches are often the bane of many a machine knitter, as are math calculations. I have recently come across several instructions for hand knit donuts, embellished in a variety of ways, and was curious about turning the knit sideways in order to create a machine knit version. Yes, there are formulas for creating such shapes, but once in a while “winging it” on small projects may provide an easily achieved, workable result.

I began with the formula: 30 stitches in width, divided by 3 = 10; 5 stitches used to create held, narrowed bands at both sides, the 20 remaining stitches knitting throughout the length of the piece, for 20 wedges/ repeats.

A single repeat may be programmed into an electronic machine, knit with the carriage set to slip throughout, and with end-needle selection canceled (covered in previous posts).

When I taught courses in machine knitting, the first “garment” made after several weeks of swatching and learning the various stitches, was a “baby hat with earflaps”, with the proviso that the same directions had to be used by everyone in the class for stitches and rows, but each student was free to select yarn and stitch type. This often became the first lesson in the importance of gauge, with results varying in size from mini doll size “hats” to gigantic ones. For my donut versions, I used the same directions. The striped one is produced with a random sock yarn that gave my machine fits at tension 8, and produced a very tight fabric; the yellow is from a good quality 2/8 wool at the same tension, resulting in a much looser knit, and a much larger final product. I was casual about seaming the 2 open ends of seaming the knit together on the machine by simply using a latch tool bind off, an invisible seam could be created by grafting with Kitchener stitch. I did a bit of stuffing as I went along in seaming the lengthwise portion of the piece in the second donut, as opposed to leaving a smaller opening in the first, making the process easier, and I paid more attention to seaming of the side “tube” stitches. Once again, it is obvious that changing the material may change the size of the final product significantly, making those tension square calculations important for any predictable results in sizing. 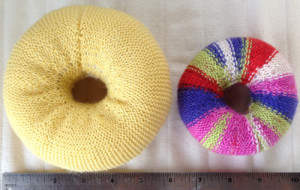