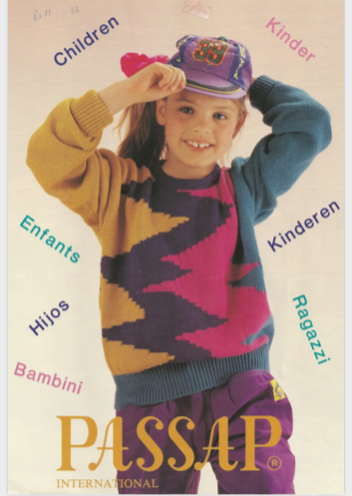 shown below on the right 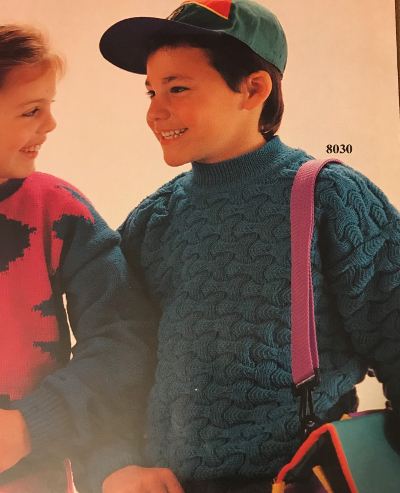 The instructions for the stitch pattern include a knitting technique to be programmed via a card reader. The results of entering it would be altering the pattern internally with the goal of providing racking directions on the console with each pass of the locks. The Duo has a 40 stitch wide punchcard capacity while the black and white squares repeat is 14 stitches wide, so not for use on it. DIY techniques for the E6 are a whole other topic, so let us analyze the Duo instructions. Keep in mind that in Passap the front bed moves when racking, it is the patterning bed. In Brother the “front bed” is actually the ribber, while patterning occurs on the top bed, so needle arrangements will be reversed. Brother has only needles, so pusher selection is not pertinent in diagrams. The out-of-work needle positions on the back bed need to be matched in the same arrangement and location on the Brother ribber. Transfers are made more easily be made to the knit bed after completing the cast on and the first KC preselection row is knit. Be sure to return any preselected needles to their original position. If the needle pitch on the ribber is changed to P to make the transfers easier, remember to change it back to H before proceeding, this is a fabric with every needle configuration on both beds. 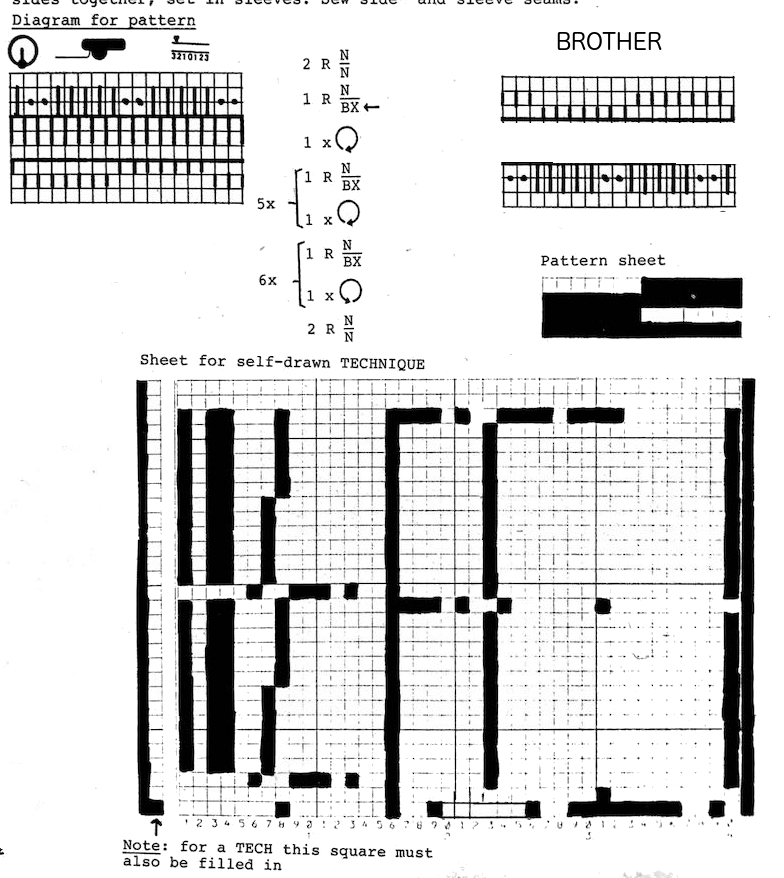 Translating Duo directions to black and white squares in order to develop a repeat for use on Brother: N/N is easy. The Duo is using buttons on the front bed and selection in response to their arrow setting to alter and progress through the pattern. The setup is with 7 needles up, 7 down, creating a 14 stitch repeat. BX on Duo (LX with patterning on front bed E6) is the equivalent of slip setting on Brother. No arrow keys, Passap on N, everything knits. Brother equivalent is a row of black squares (or punched holes if applicable) for each row on the N/N knit setting. BX <– will reverse the needle selection from whatever it was immediately before the previous rows of N/N, and remain there for the full racking sequence. After the first 32-row repeat is completed, at the end of the 12 racked rows, there will then be 4 all knit rows between racking sequences, two knit rows at the top would match 2 rows knit at the start. Once again, the BX<-for one row sets up the alternate blocks of racking. I chose to start my repeat with the 930 with a cast on in racking position 10. The chart shows racking positions on each row, reversing direction after having reached #4. E6 knitters may use the same repeat, matching the Duo racking starting on 3 left to 3 right and back 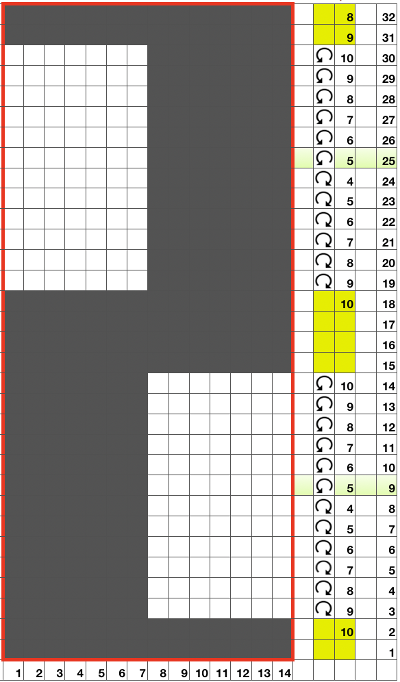 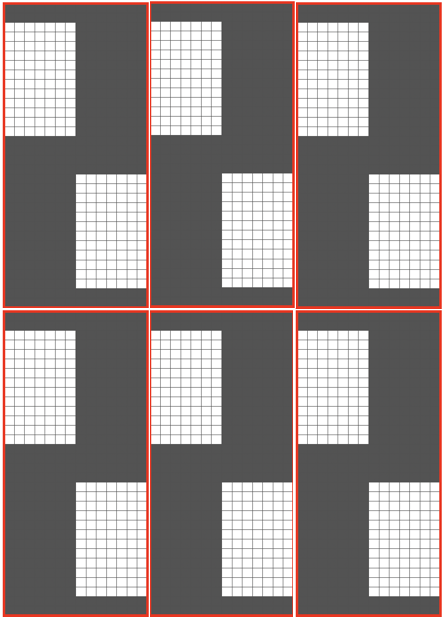 My samples actually produced a mirror image of the repeat, this is how that would have appeared flipped horizontally in the magazine 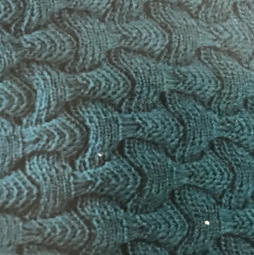 I first used a blue Italian import 2/14 wool, which knit well, but I had a hard time seeing the stitches being formed on each bed and missed a couple of dropped ones. The 2/24 acrylic to its right knit resulted in occasionally dropped stitches that were actually solved by swapping out the needle retaining bar. A sample in the yellow 2/13 wool used in previous posts simply would not stay on the ribber well for the number of rows in this pattern. 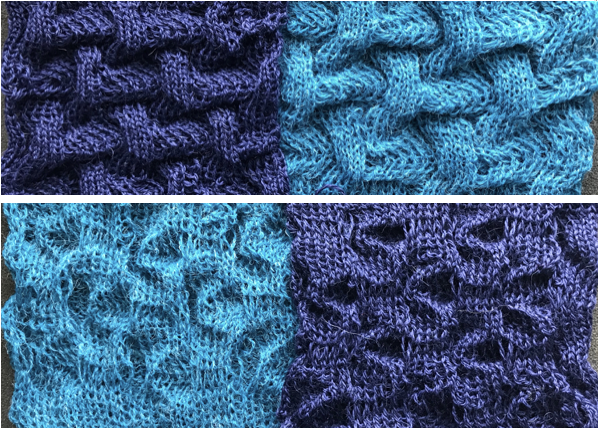 After swapping out the needle retainer bar,  knitting went smoothly. On the right in the photos below, the same racking sequences and needles out of work on the ribber are used, but the knit carriage was not set to slip, so essentially, every stitch on every row on the top bed was being knit. In addition to needle preselection, one should also check the type of stitches actually being formed. One of the disadvantages to knitting ribber fabrics is that several inches may be produced before one can actually evaluate the pattern being knit by peeking between the beds. 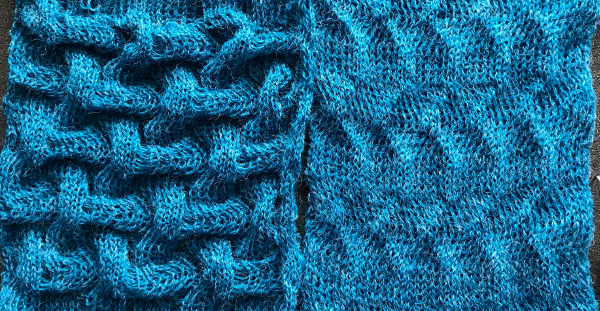 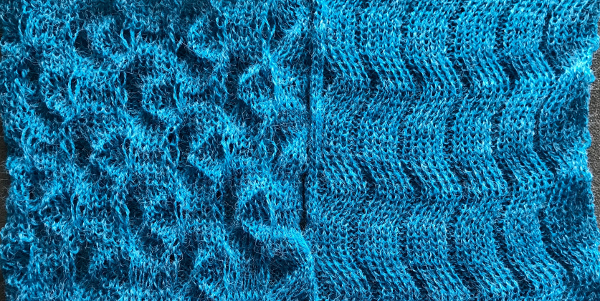 I will have to revisit a previous post with some interesting racked textures that now appear to me to be related to this one,  beginning with this one, from a publication for the dubied machine

this case the back bed knits every stitch, every row, a single function on all needles. If produced in the illustrated orientation, the racking bed (ribber) switches from knitting to slipping stitches. In Japanese machines, the ribber carriage cams must be switched manually from slip to knit to reproduce the pattern. To begin with, the repeat is rotated so it is the knit bed that will have the needle out of work selection

was hesitant to rack four positions after only 3 rows of all knit, so I began with 4 rows knit, 4 rows slipped, with needles set up as shown above. The racking happens after every 8 rows by 4 positions, and the first all needle preselection row at the top of each repeat is an easy marker for moving the ribber. Pitch is in H, the top bed can be moved even though all needles are selected because the ribber needles are in B position, and there are no potential jams. I chose to start at 10 and move from that to 6 and back. Solid black and white lines can be used, since the needle selection on the top bed is fixed and altered by movements of the beds in relation to each other, not the programmed pattern itself. The repeat with main bed set to slip <– –>, the ribber set  to N/N, and the resulting swatch: 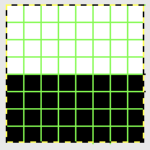 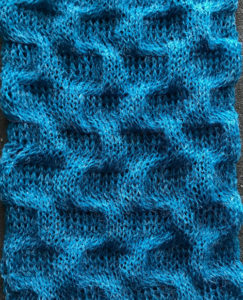 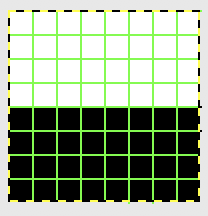 A partial view of my needle bed: 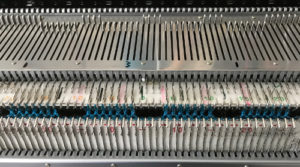 All needles used in my swatch, I began the stitch transfers down onto the ribber needles on the far left, continuing across the knit bed.

As end stitches knit on the ribber alone, a small edge weight may be required on that side. As stitches on the main bed are not worked in the slip stitch rows, they become elongated. Racking by 4 positions is not possible unless there is enough fabric so as not to pull so much that stitches will not knit off. If the yarn does not have some “give” that can make the changes in position harder, some yarns may break easily. The long stitches:

After the needles are preselected for the next row of all knit, rack to the next position; the long stitches will then lean to one side or the other

The resulting swatch, shown on both sides:

The texture becomes more pronounced after the swatch rests. If acrylic is used, remember not to press the knit. An attempt to identify stitch actions:

This is the swatch knit changing ribber settings to and from slip <– –> to N/N on appropriate rows.  I found the method above far simpler 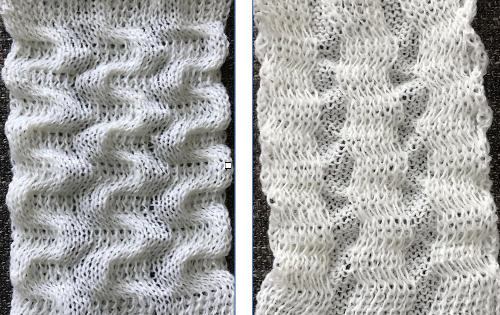 Coincidentally this morning a Duo pattern using a different setup was shown in Ravelry, and I was asked whether producing the same on Brother might have any advantages.  The Duo results, shown on a project page, are very similar to the above. The advantage in my opinion of using this method on Brother machines is that there is no need to change lock or carriage settings, and racking when the preselection for the next knit row first appears creates an easy marker for when to move from the previous racking position to the next. 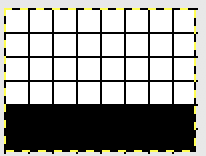 Racking is from position 10 to 6 and back just as in the previous blue swatch, after the first preselection row at the start of  the following repeat sequence. I began the stitch transfers down onto the ribber needles on the far left, continuing across the knit bed. The final look will vary with the choice of yarn and its color. Both swatch sides. 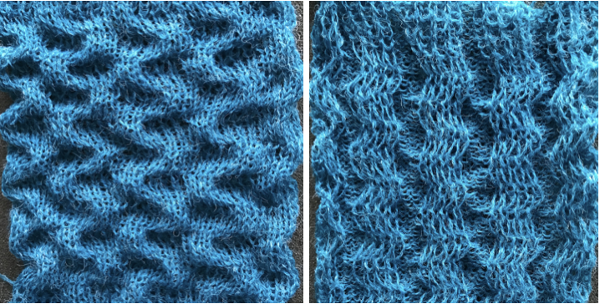 If for some reason horizontal direction matters simply cast on with racking position on 6, and continue to and from there to 10 and back. Below is a horizontal flip of the same swatch image, a way to quickly decide whether doing so might be preferred.