Manuals can sometimes make my head hurt, and as a result, I often rely on previous experience which in turn can lead to assumptions that may require clarification, even in my own mind.
A question came up on Ravelry about racked ribs on every other needle. My instinctive answer was that racking would need to happen by 2 full numbers at a time for the proper swing to occur. Here is an attempt to explain some of what happens, and why that is not always true.
To start with, manuals usually have the knitter start with the carriages on the right-hand side of the machine, perhaps to prepare them for fabrics that will need to travel to and from the left if the color changer is in use (“Japanese” machines). If the latter is not, there is no reason not to begin knitting from whichever side you prefer. Then we get to 3 circular rows. The third row is not needed, it gives floats on one side of the rib that may or may not be noticeable depending on which side of the knit is the public side. If 2 circular rows or a racked cast on is used, that may set off the start of patterning in the wrong direction from that published.
The usual depiction of the zig-zag row with the cast-on-comb in place on the machine is this 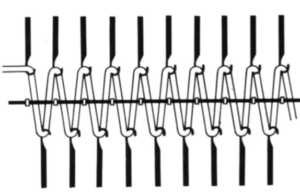 The intent when knitting ribbing is not to have needles point to point, smashing into each other as one travels from side to side. On every needle rib, the Pitch lever on P will set just that up, H for half-pitch will place needles so they move smoothly halfway between those on the opposite bed. On every other needle rib, the P position will set up needles in the center of the spot left empty by a needle out of work on the alternate knitting bed.

In racking, as the ribber moves, its stitches will align (usually) to the right or left in turn of stitches on the main bed creating a sort of crossed texture. If the needle set up remains as above, and racking is performed one step to right or left followed by another in the opposite direction to the starting position, the stitches on the main bed remain in the same space, there may be movement between the purl columns, but not across them. 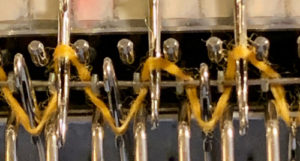 The zig-zag will lean slightly to one side

The next step is to ensure that as racking begins, you are not moving stitches back into the same empty space on the opposite bed, but rather crossing into an adjacent one

If that is understood then one can make the choice of moving left or right and be off and running in the pattern, aside from the starting side or some of the other directions given in patterns or manuals. Cam buttons and patterning may be introduced as well. This is how a row of knitting might appear after racking. 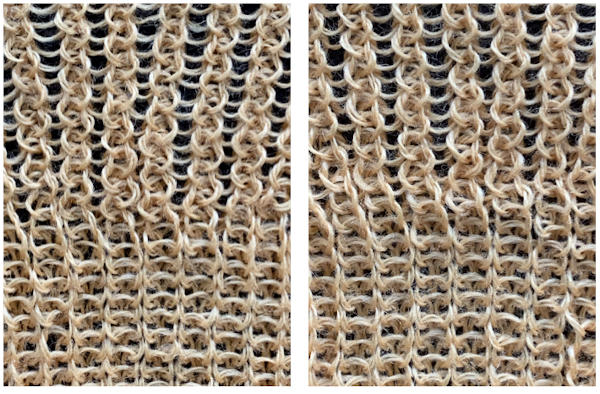 This page from the Ribber Techniques book shows fabrics knit on EON, adding tuck cam buttons into the mix and slightly different needle arrangements, varying the look of the finished knitting. 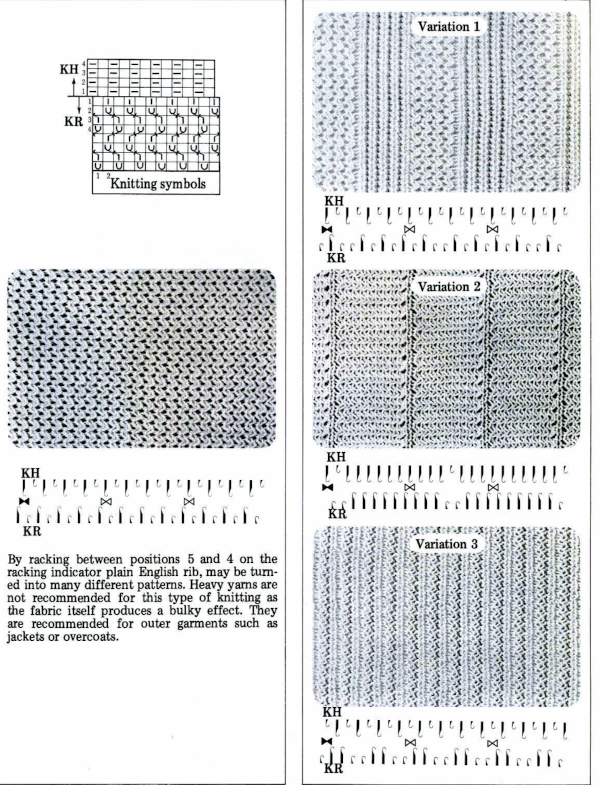 Most Brother racking patterns are accompanied by diagrams such as the one included above. They are shorthand for what is happening on both beds. If the knit starting side is different than the one recommended, as long the necessary movement direction against the fixed stitches on the main bed is recognized, the starting point can be chosen to be on either side of the main bed needles (ie. starting on row 3 on left, above blue line of the chart as opposed to row 1).

If multiple side-by-side stitches are in work on the ribber, the half-pitch setting applies as well. When tucking is added, for increased stretch, it may be necessary to compensate for the width of the resulting fabric by casting on on every needle and then transferring in the desired configuration between the beds. Transferring is easier done in full pitch with a return to half-pitch prior to continuing to knit. The bind off is likely to require considerations for added stretch as well. Slip stitch narrows the fabric. Such adjustments are usually worked out in test swatches.
Using the half-pitch in EON brings the needles on the ribber closer to those on the main bed, which in turn may have an effect on yarn weight use when building up loops in hooks ie in fisherman or half fisherman rib variations. Sequential racking ie. 5, 6, 7, 6, 5, 4, 3, etc will not produce crossed stitches with single position shifts on EON. This attempts to imagine where actual crossings would occur, every 2 position shifts in either direction. The starting point for cast on may also require a change in position, based on the number of positions available; for example, Brother has 10, Passap has 6.

By the way, the racking position indicators are slightly different in the Brother standard vs. the Brother bulky machines 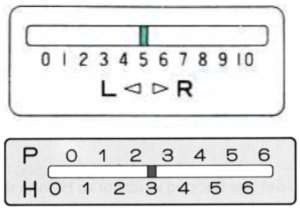