Reviewing properties of both: maze patterns have long vertical and horizontal lines broken by regular gaps and the pattern lines change course from the vertical to horizontal, and vice versa. Maze cards can be identified by completely punched row segments, some alternating with every other square marked for two rows, usually geometrically shaped. Areas of stocking stitch produce horizontal colored stripes, and alternating pattern stitches that slip or tuck cause the vertical stripes, which are sometimes pulled nearly diagonal by the influence of tuck or slip. The fabric will be unbalanced because the number of needles slipping or tucking will not be the same on every row. Odd rows usually form 2 color horizontal stripes, even rows vertical stripes, with color changes occurring every 2 rows.
Mosaics have a brick arrangement (tessellae), with clear perimeters and cores, and stepped diagonals (frets) that are partially formed bricks, their positive and negative spaces are created by the use of contrasting colors. The stripe sequence is not as obvious. The punchcard does not resemble the original design.
In single bed work, the reverse of the fabric will show the original design in the texture of its slip or tuck stitches. There usually will be no floats longer than one or two stitches.
The knit side may look like a fair isle but the back lacks any long floats, hence the name “float-less fair isle”
The row gauge is compressed. Tuck fabrics are short and wide, slip ones tend to be short and thin. Some patterns elongate in washing. The tension used is usually one number higher or more than that used for stocking stitch for slip patterns to reduce their narrowing. Tuck knitting may need adjustments to lower tensions. Smooth yarns in contrasting colors are the easiest to establish an easily recognized test pattern, the choices that follow may then be far more personal.

After a while repeat units begin to become familiar. Pondering possibilities: 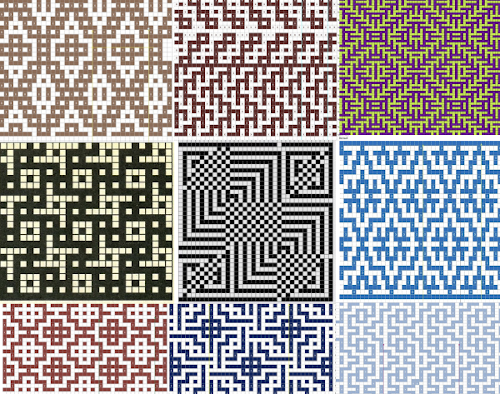 Here the design knit as a fair-isle pattern would produce long floats, going through the steps of converting it for “floatless fair isle” proves of no benefit. 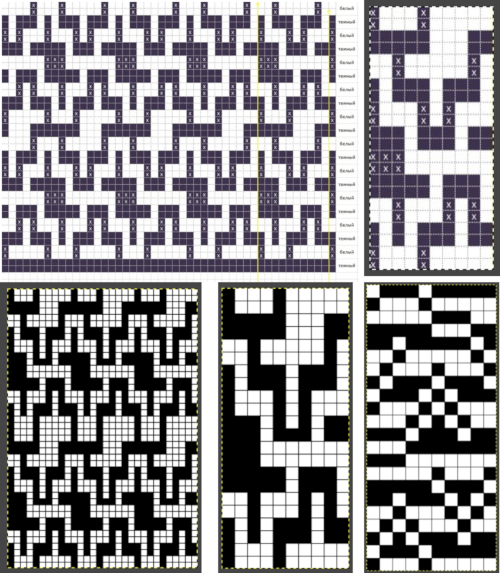 I previously wrote about the use of weaving
drafts as inspiration for other textile techniques, ie. knitting.
Endless published drafts may be found online or in books that might be interpreted for use with mosaic/maze single bed knitting. Having electronic machines available lifts restrictions in pattern width, while repeats too large for narrow items such as scarves may become useful for shawls or blankets. One such repeat,  with .pngs shown for both single and double-height: 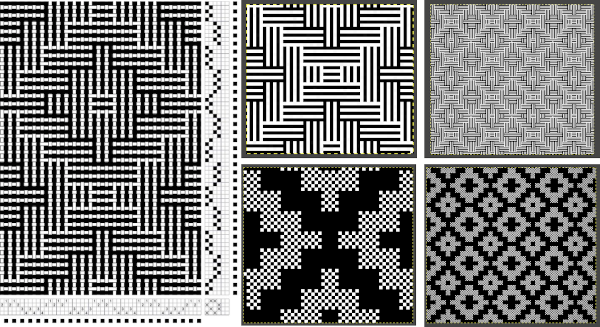 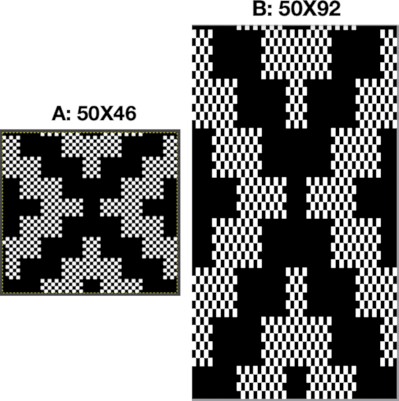 This repeat is 36X36 before being lenthened X2 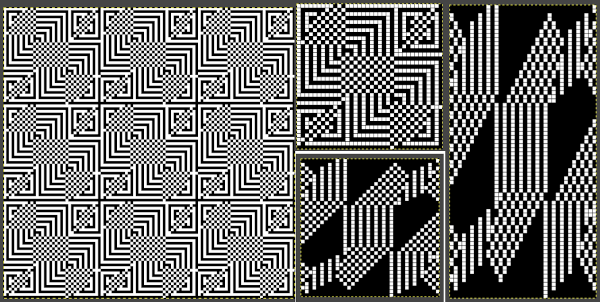 A different sort of challenge was posed by this 18X18 image with a row shift in areas with a large number of both filled-in or blank squares. As one moves up its magnified version in Gimp it becomes apparent that a row will have a very long float in one of the two colors. One option is to skip that row, resulting in the green gridded repeats for the converted motif both shown both for single and double length. The result in the knitting test swatch produces an unplanned color shift which could be declared to be a design feature, or one can continue with editing the inspiration source. 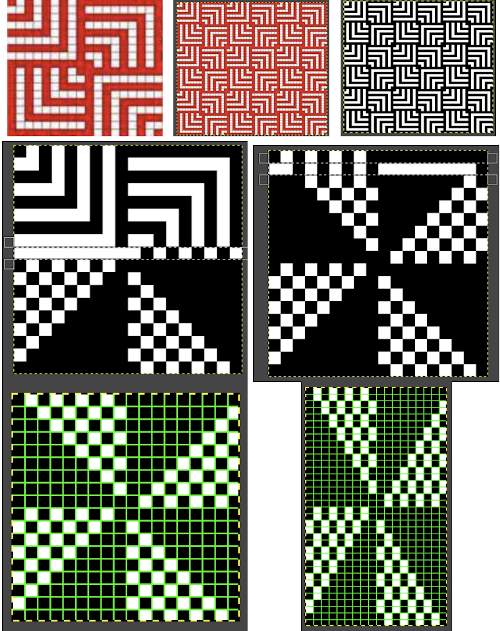 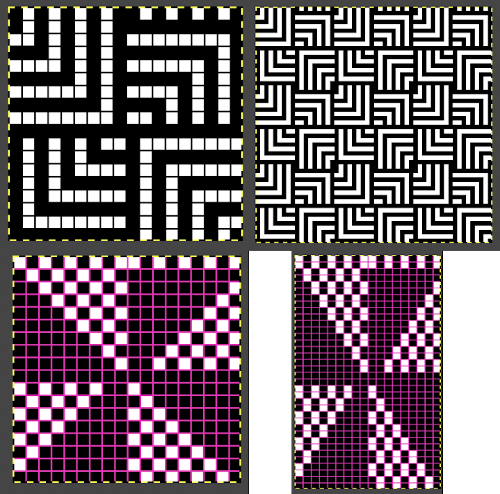 Generally when creating these patterns on Brother machines, patterning selection varies for each pairs of rows. I got distracted while making the above swatch by a phone call, got to the point where there is a very obvious solid black all knit row in the repeat, but “forgot” its presence. I assumed I was having a selection or a carriage issue and scrapped the knitting off. Note to self: “remember to always check the programmed design before you do that again in the future”.