Early Brother punchcard volumes showed symbol charts alongside punchcard repeats. The translations at times were not the best. Here is some of the advice offered for woven lace patterns: 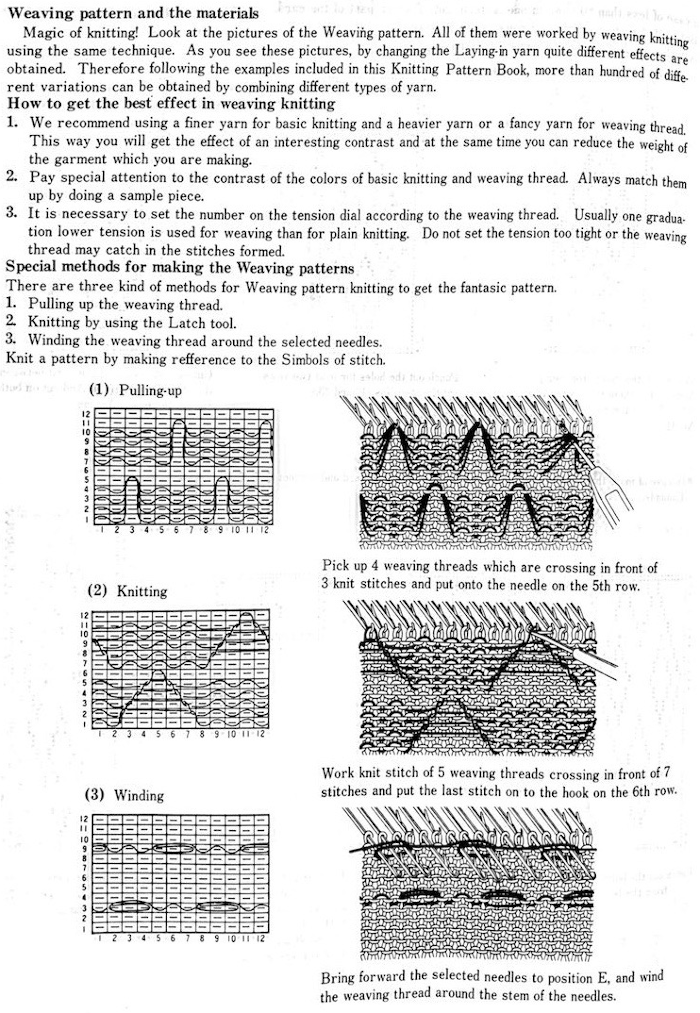 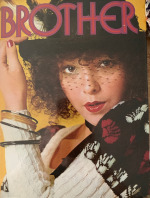 It has the added data on how each of the fabrics might look visualized in a chart prior to its expansion as a card in full repeat. This is the top half repeat of a card for pull up weaving combined with lace along with the directions for execiting the knit 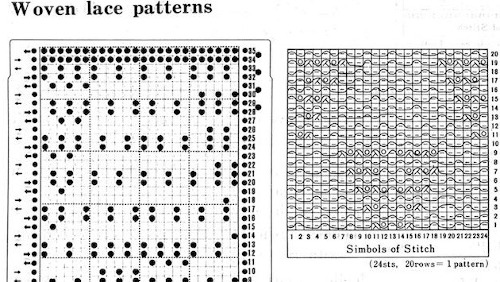 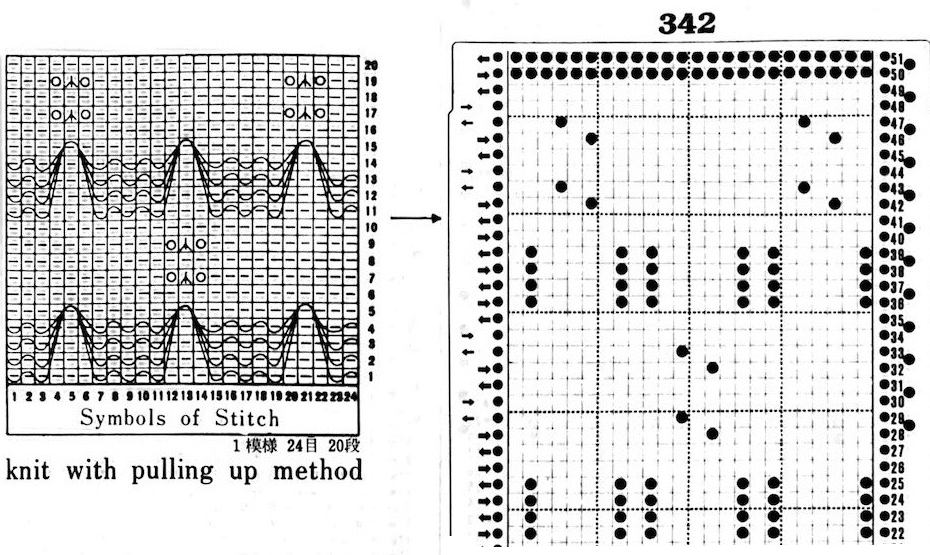 My experience with trying to knit CARD # 589, led me to notice immediately that all carriage passes, if the arrows are followed, are made from the same side. That avoids the repeated selections when carriages first start operating from the opposite sides. My interpretation of what the card is achieving: 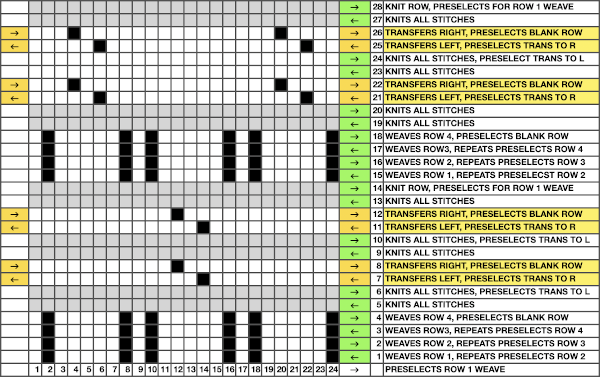 Taking carriages on and off the same side of the machine is nothing I would be inclined to do for any length on any machine. In theory, the identical repeat above could be used on an electronic KM in that way, but I did not get very far with that method before giving up.
The expanded the repeat for use on my 930, with programmed all-black pixel rows for any pairs of all knit rows, made for smooth, easy knitting 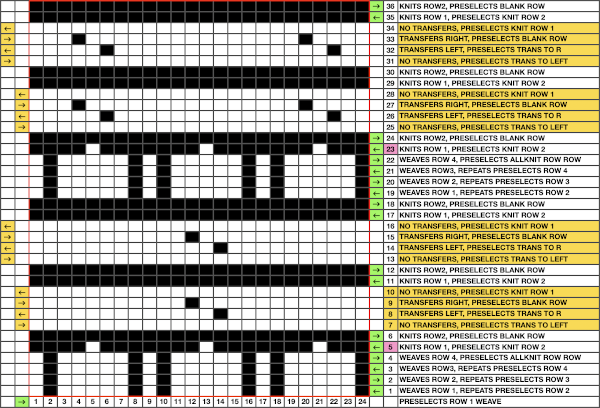 The weaving yarn used in patterns such as these will be held in the hooks of the needles, combined with the knit stitch already there. In this instance that adds up to 5 loops that need to knit off smoothly on the next knit row, so yarn thickness choice meets with limitations.
The first preselection row is made from left to right with the knit carriage, it resumes patterning on the right, beginning the weaving pattern. End needle selection is on, KC I.
When the knit carriage is on the right and all but those single needles are selected on design rows 5 and 23, pick up the floats from the weaving yarn with a single eye tool and lift them onto the non selected needles, then bring the same needle out to E position before moving the carriage to the left to create the first all knit row.
Before transfer rows using the lace carriage, if any end needles have been selected in pattern push them back to B before traveling with it to the opposite side. The electronic repeat, followed by its .png 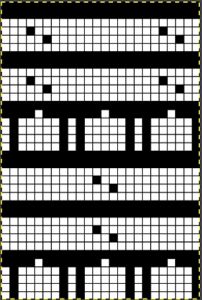 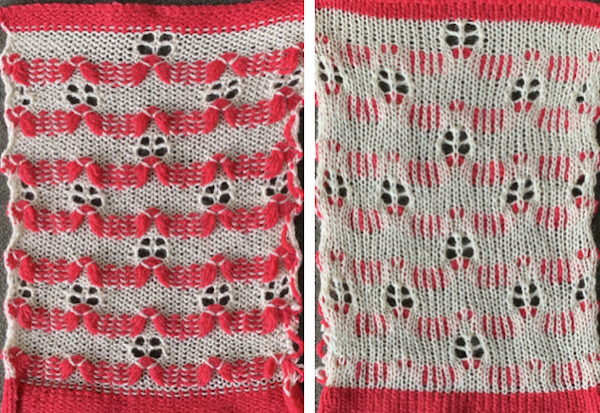 Later punchcard volumes ie 4 and 5 took into account the repetition issues when carriages select needles for patterns from opposite sides, and that may be the best place for card designs that may be knit following arrows as shown, in the traditional manner. This design has fewer woven rows, a larger lace motif 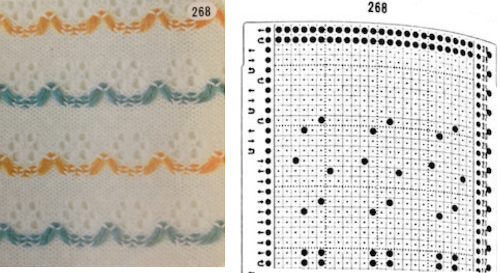 Volume 4 offers only this advice: “the empty needles are selected at the second lace pattern, but this is not a trouble, and you may pass the L carriage to the side which is indicated on the punchcard”. I take that to mean that after a transfer if the same needle is selected again, don’t be concerned, keep moving the carriage in the direction of the arrows.

Because the weaving is for only 2 rows, the use of laid in, thicker yarn is well tolerated. The punchcard repeat amended for use on electronic, shown prior to mirroring 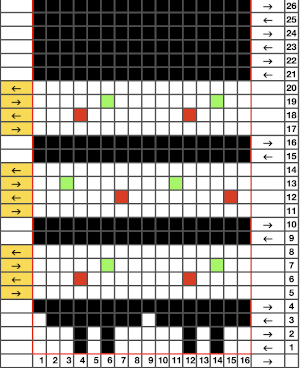 E wrapping or other weaving techniques may be used on “weaving” row preselected needles, needles can also be hand-selected in knit areas in any other programmed lace repeat to add details on the chosen row(s) without engaging the card reader. Knit 2 plain rows, select weaving needles, wrap the yarn over or around them in the desired configuration, knit 2 plain rows again, resume lace patterning. Varieties of wraps for use on every needle with yarn similar in weight to the ground, or every other needle with thicker yarn. 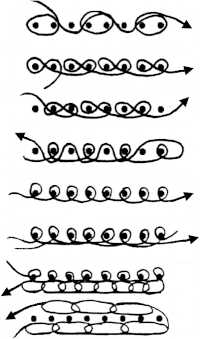 Once the desired effect is achieved, a repeat could in turn be configured and punched or programmed to make the process easier to track.