Very little has been written on this topic.
The easiest method to produce the eyelet and fair isle combination is to create ladders in spaces between vertical FI motifs. The end needle selection is canceled. The swatches show the transitions in the development of the final design 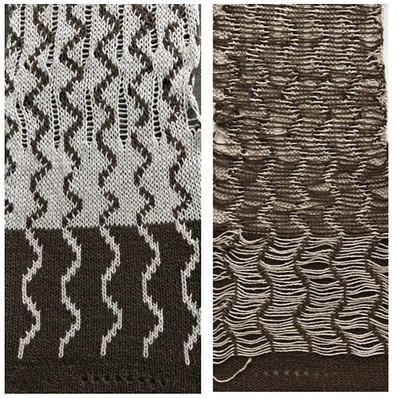 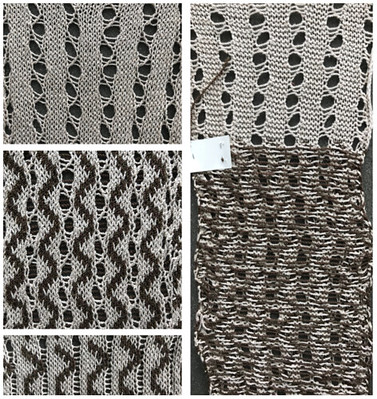 Susanna in her Machine Knitter’s Guide offers a version knit in combination with the ribber on page 218, and a small amount of information on single bed versions on pp, 220-221.
Before any DIY, I like to start with a published pattern. Toyota, in this volume, 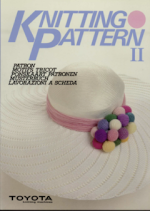 offers 4 punchcards for use with this technique 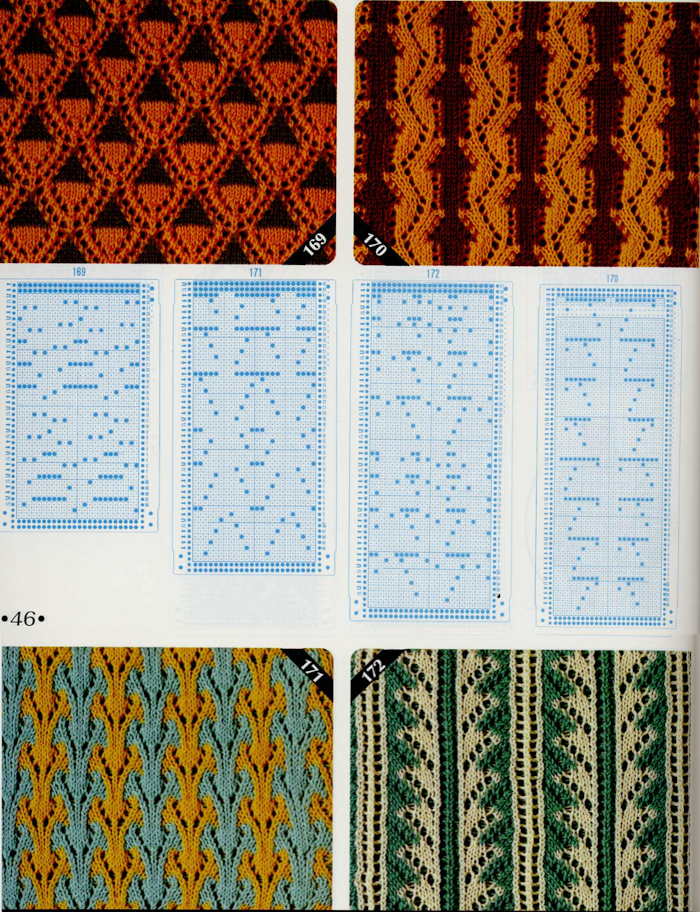 I chose to work with #170. The lace carriage in the Toyota models operates from the right side rather than the left as in Brother. The direction of the arrows marked on the card actually indicates movements for the carriage operating from that side. That fact is taken into consideration planning a possible Brother punchcard repeat. Lace direction arrows are matched based on the punchcard image being mirrored horizontally. The card in its original version is imaged on the left, mirrored on the far right, the proposed Brother punchcard in the center 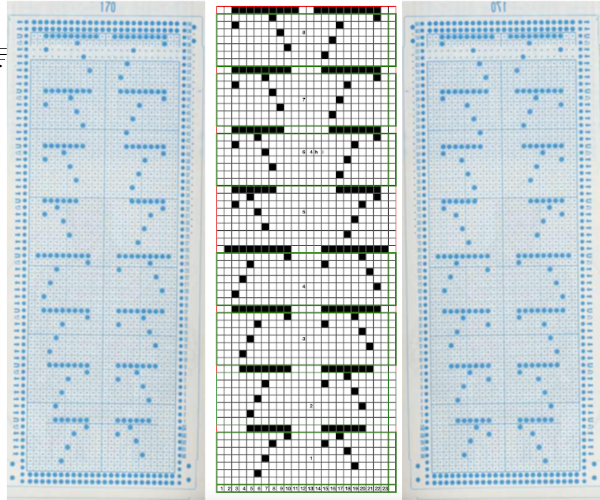 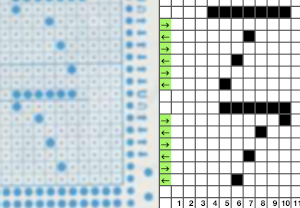 The proposed Brother punchcard repeat is now expanded for use on the electronic machine, ready for converting to .bmp in Gimp. Numbers in the middle of the chart on the left helped keep track of repeat segments. I also used red dots initially to mark segments as I had completed in the expanded the repeat, then erased them 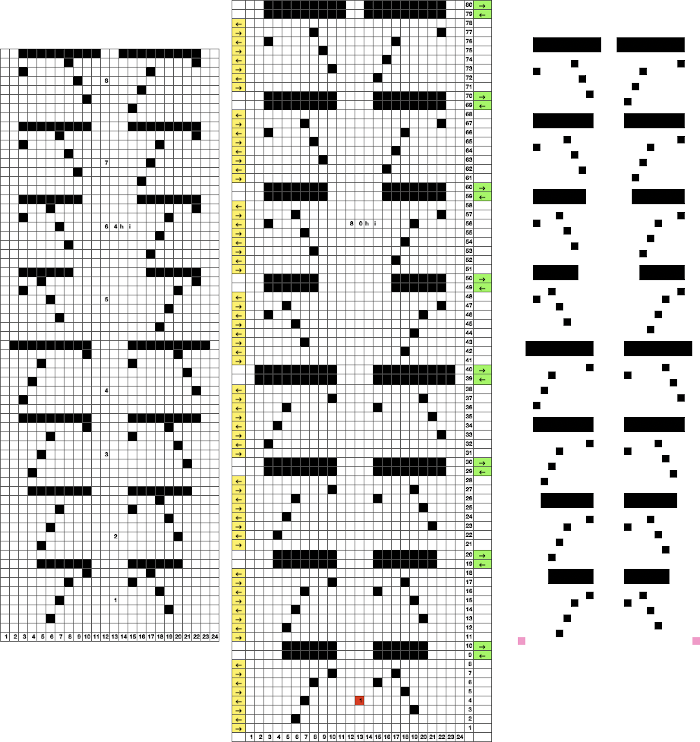 in turn in need of mirroring for the .bmp to be used in the 930

Observations and settings:
The knit carriage is set to FI patterning for the knit rows, the typical floats will be created. Commonly, when floats are wider than 5 pixels, anchoring the longer ones may become a preference or even a necessity. This would add time to an already complex fabric. Each FI design row is repeated twice.
The transfers in this design are made on the yarn in the color in the B feeder. I began my swatch using the light color yarn, failed to switch its position to the B with color 2 for the shape in A, accounting for the dark stripe at the swatch bottom
If KCI is used, end needle selection will be made prior to the lace carriage passes. Those preselected needles will have to be pushed back to B position by hand prior to using the LC or they will transfer on one side and drop on the other.
In this pattern, the LC operates for 8 passes, followed by 2 rows of FI throughout the piece. The first preselection row is made with the KC from the left as it moves toward its home on the right.

What of DIY? From working on the repeats for transfer lace combined with weaving, I understand patterns beginning with transfers to the right rather than the familiar to the left, are shortened considerably and carriage changes may be made as often as every 2 rows, saving many carriage passes. In order to understand the choices that need to be made, I began with a lace transfer pattern, thinking I could add contrasting color shapes in FI. 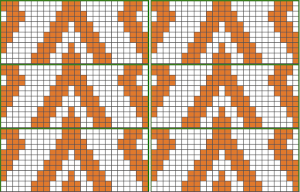 however, the swatch had issues. The eyelets were not occurring in the same spot in both directions, the color transition at the repeat intersections was clumsy 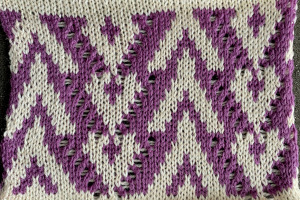 Regrouping: the easiest place to insert eyelets is in the dominant, background-color

A quick test: rows with no needle pre-selection will knit in only one color, end needle selection must be canceled before knitting to the other side 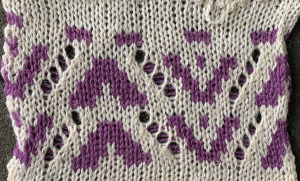 Can the exchange of the color positions in the yarn feeder create colored shapes with eyelets on the white ground? not only does it not do so in a way I liked, but my machine was having none of it as well 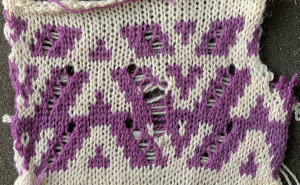 Coming up with a better plan resulted in the following repeat. The transfers are made in the wanted direction on the purl side of the fabric, so their location becomes easy to check and identify during knitting. In this exercise, they will be placed in the center or the previously knit fair isle rows. Magenta cells marking the doubled stitch after transfers to the right, the cyan one the doubled stitch after transfers to the left. The two blank rows at the top of the design will knit in the background only. 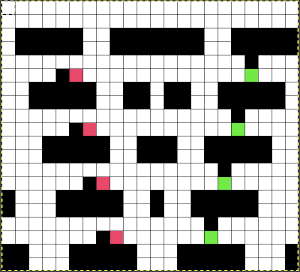 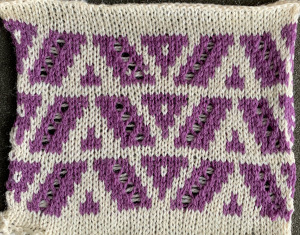 Building the repeat in Numbers: the eyelets within the shapes in the contrast color need to begin and end with a pair of FI rows. They are placed taking into consideration the black cell blocks immediately below them, not the ones directly above

It’s good to start with a small repeat.
A: one may begin with a planned repeat, in this case, 20 rows in height
B: create a table at least twice the planned height or start with a long template that in turn will have half its rows hidden. Holding the command key select every other pair of rows beginning with 2 blank ones at the top of the table, and hide them. The location for the options to hide and unhide rows and columns: 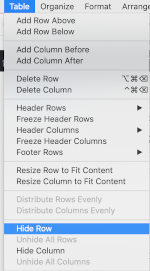 C: Once the rows are hidden, the black cells are filled in
D: the repeat is tiled to check its alignment
E: the hidden rows are unhidden,  I like to add colored cells as shown to ensure proper placement of eyelets
F: place black cells for stitches to be transferred where desired
Previous posts describe the steps to isolate the repeat as a screengrab and importing it into GIMP. The grab is cropped to content, image mode to indexed, scale to the proper size, mirror for use on the electronic if needed, save, and use the final image to download to the knitting machine for testing.
The first pair of rows are knit in FI, so the preselection for design row 1 is from left to right.  The KCI setting will bring end needles out to D prior to lace rows, those needles need to be pushed back to B position prior to moving the LC from left to right. Continue with switching carriages every 2 rows. This repeat is 20 rows high. When knitting the last 2 rows, no needles will have been preselected, except for first and last. Push them back to B for those two rows, so only the color in the A feeder knits, and the preselected needles do not drop off the bed. The second color does not need to be removed from its location, but in executing a wide piece of knitting, the extra yarn pulled down from the tension mast as the knit carriage makes its passes may cause issues. If the yarn is removed and held aside, be sure to place it back after the 2 passes with the ground color so as to avoid forgetting to do so prior to resuming patterning using 2 colors per row. 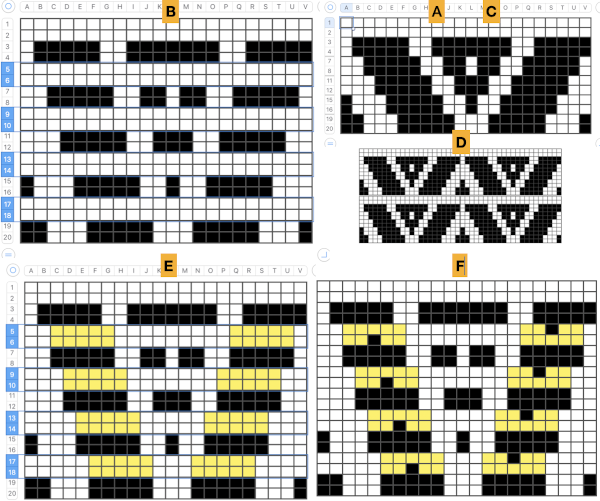 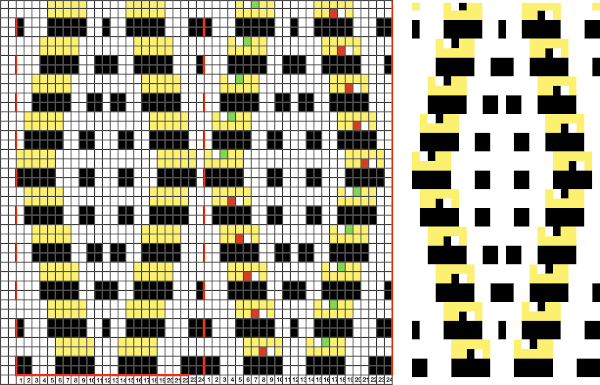 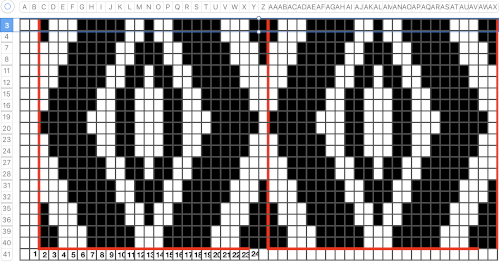 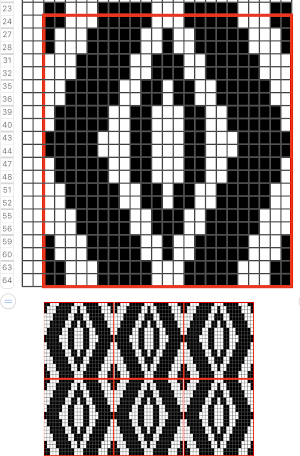 Though the repeat is 24 stitches wide, it is not suitable for use on the punchcard machines in this format, its tiled test 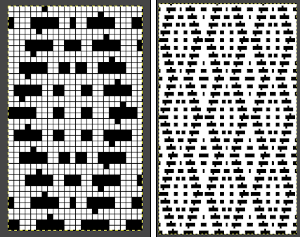 The one area where the white got picked up with the contrast is not due to programming, but likely to operator error in “correcting” a dropped stitch

Adding lace shapes in the ground can follow the same concept

The repeat does was not planned as a continuing pattern, but here it is knit and repeated in height X 2 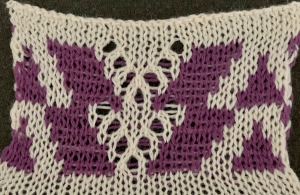 and with the addition of two blank rows at the top of each segment. 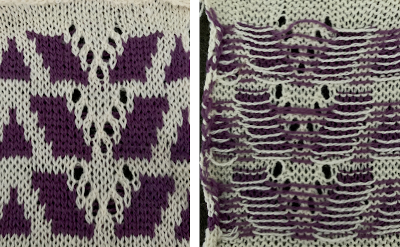 The possibilities are endless, with some patience, they can be manipulated to meet personal preferences and taste.

One thought on “Lace meets FI on Brother machines”