The term lace is often used in publications to refer to fabrics created with techniques other than the familiar hand or machine stitch transfers. In turn, the ribber may be added to working most of the fabrics with varying degrees of complexity. Some variations are possible only on specific machine brands, at times possible in others with adaptation and addition of other techniques. Many combination fabrics may be achieved, mixing carriage settings or adding hand techniques. A list of common terms applied to “lace” that include tuck patterning:
Hand transfers: used to create eyelets, possibly in combination with pattern stitches out of work, and moving stitches singly or in groups
Tuck and lace: transfers combined with tuck stitch patterning
“Lace like patterns”: possible in machines such as Brother and Passap, which allow for the same stitches tucking in one direction, slipping on the return of the knit carriage to its starting side. It matters which function leads in the pattern
Tuck lace: tuck setting in both directions with specific needles out of work
Ladder Lace: worked with columns created by needles left out of work, tuck being an option in the knit portions
Punch tuck rib: every needle rib combined with tucking pattern on the knit bed Drive/ drop stitch lace: stitches start on either of the 2 beds, loops are picked up and dropped on the opposite bed
A list of the headings for most of the tuck stitch variants covered in my posts is now added to the start of my blog index

Once a stitch has been tested,  unusual yarns, including wire may be used 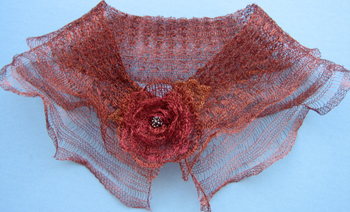 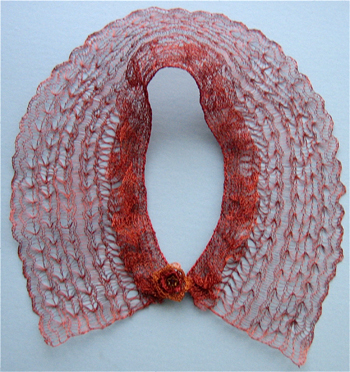 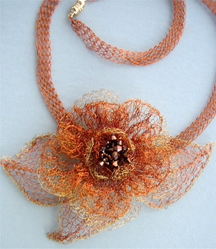 Getting back to basics: a punchcard sometimes supplied in factory packs provided with machine purchases, is shown here in 1/3 of the minimum 36-row card repeat, while the minimum electronic repeat is outlined in red, measures 4 stitches by 4 rows 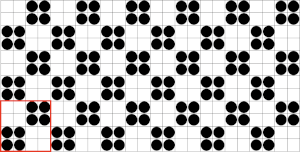 Adding needles out of work by simply choosing to cast on and working on every other needle it does not matter whether even or odd needles are in use, the pattern will be identical but simply shifted over by one needle. For frequent color changes, make the first preselection row toward the color changer to start with, keep notes as to where the repeat color selections happen as experiments are expanded, evaluate color choice as a third or even fourth color are introduced 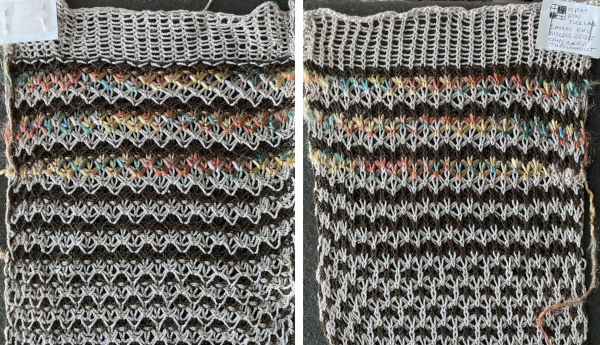 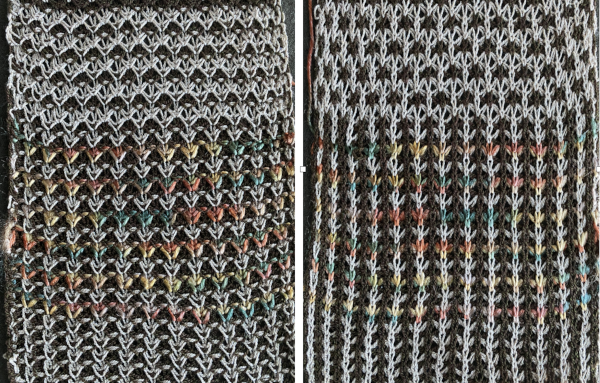 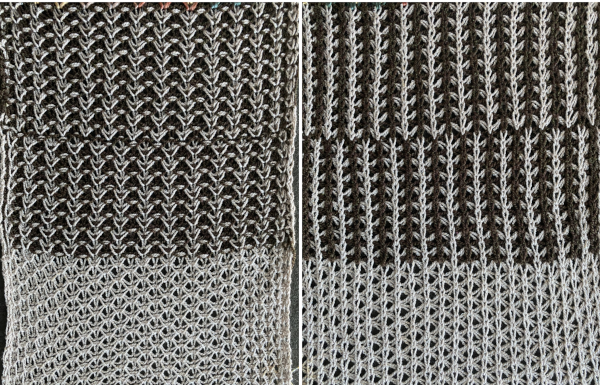 Though casting on and binding off both need to be considered for extra width, having sections of the repeat knitting in plain knit will help sort the needle arrangement and loop structures when tucked knits appear similar-looking

The repeat on any tuck row can help test the number of rows a particular yarn will allow before the number of loops in the needle hooks become too many to knit off well. The added texture, or elimination of any, could be used in borders or occasional horizontal portions of the knit

Some of the concepts in the visualization of more deliberate color placement through charting was discussed in the post: Single bed tuck and slip stitch fabrics 2: adding color
A starting repeat from a Pinterest image inspiration: the blue yarn will knit on every needle

the third tuck row on the machine

Accommodating those blocks of knit stitches in the pin also changes the repeat to six stitches by 6 rows, making it usable on punchcard machines as well 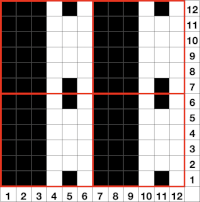 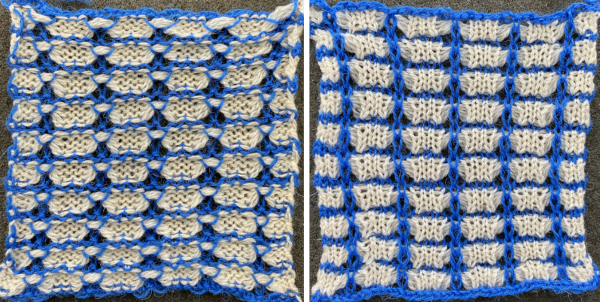 Two from one: the same tuck repeat was altered by changing the needle out of work arrangements. Slub yarn may be used but changes the value of the lines formed by the floats created in the needles out of work gaps. 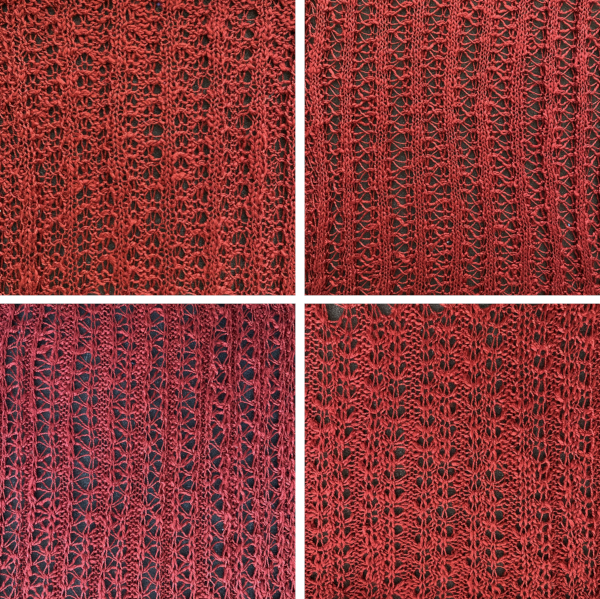 In my classes, I encouraged students to create long swatches testing out their patterns in a variety of stitch types with color changes as well. Thet can serve as a visual reference to duplicate effects when time has passed. Here the tuck pattern, not suitable for FI at all, is tested as DBJ, followed by needle transfers between beds and adding the tuck setting. There is a dramatic difference in width, the wool yarn has a lot of “spring”, wanting to narrow when at rest 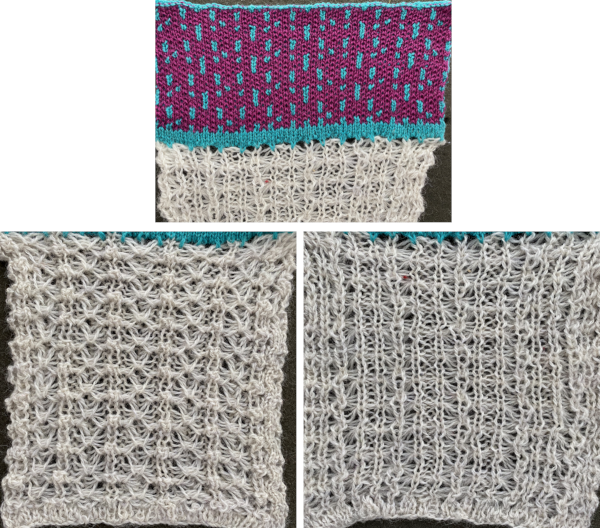 Publications for electronic machines do not always include pertinent instructions, but they will include out of work needle diagrams below each appropriate repeat. The gray cells represent white squares, which correspond to non-selected needles but also in this case to out-of-work needle position areas where open spaces are created. The 4, 6, 8 stitch repeats are also usable in punchcard machines. These are from the Stitchworld pattern book, all with the exception of 282 are to be used with needles out of work 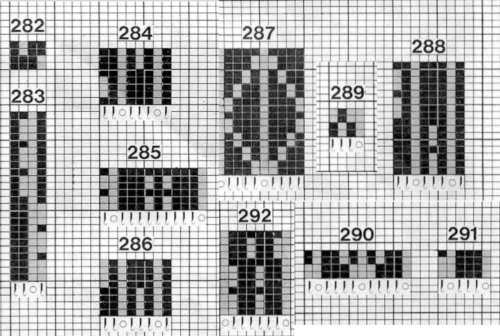