In seminar days this was referred to as a “fern leaf” pattern. Holding groups in these sequences give a bit more swing to the side of the finished piece. Directions for this fabric may be found in  the post 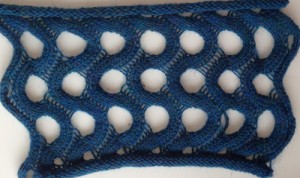 The difference between the fabrics below and the ones that look like this swatch is that when the row of held sequences is completed from one side to the other, at least 2 rows are knit across all stitches before reversing the holding direction and moving toward the starting side to complete the repeat.
In addition, there is often a tension change between the groups that pull the fabric inward and enhances the texture. In my sample, the held segments were knit at tension 6, the tight rows at tension 3.
The pattern in this swatch is executed on a multiple of 8 stitches +2.
To knit: cast on the required number of stitches, the first four rows are tight, so waste yarn and ravel cord followed by the cast on and tight rows is recommended.
At T3 knit 4 rows, COR. Set the machine to hold stitches.
T6: bring all but the first 8 needles closest to the carriage into hold.
Knit 12 rows.
COR: on the side opposite to the carriage but closest to the needles in the working position, bring a group of 4 more needles into work. Knit one row.
COL: on the side opposite the carriage bring 4 needles into hold.
You will now again be working on a group of 8 needles. * Knit 11 rows.
COR: on the side opposite carriage bring 4 needles into work, knit one row.
COL: on the side opposite carriage bring 4 needles back into hold.*
Repeat *to* until the last set of 8 needles are in work on the left-hand side, knit 12 rows, ending COL.
T3 knit 4 rows.
Reverse the process, moving in the opposite direction, beginning with knitting 12 rows on the first group of 8 stitches on the left. 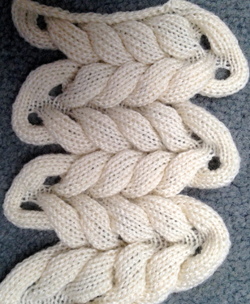 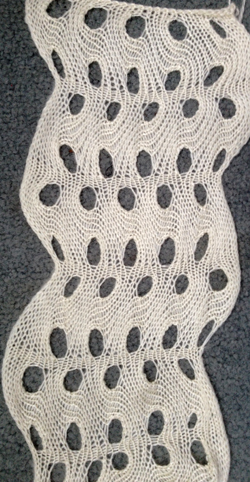 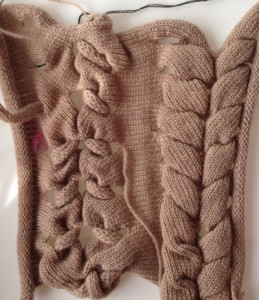