Updating to Yosemite has provided some interesting issues for me. The first was Safari pretty much becoming unusable. It took a Mac expert and a chunk of his time to resolve the issue. There are still hiccups in other apps. I thought I would revisit some of the methods I have mentioned as usable in knitting charting on Mac via a bit of discussion on cables and visualizing them.

Intwined began having issues in Macs with any custom-built stitch libraries in mid-year 2013. The last update offered and installed in September 2013 has continued to have some functionality issues in later Mac OS versions (Mavericks, and now Yosemite), stripped of any custom stitches built previously, not allowing for their addition. It has become only an occasional go-to for me now. Charts created in the program are easily recognizable.

http://sourceforge.net/projects/sconcho/ is an open-source, free charting software with built-in stitch libraries that may meet many of your charting needs in any OS version

Mac Number has once again deleted some familiar menu options, added new ones. My primary font for knit symbols is no longer available, and some of my accumulated knit symbols from other font sources continue to work on the mac, but are unsupported if using the iPad version of the program, where they appear as the original  keyboard strokes, rather than the assigned symbols 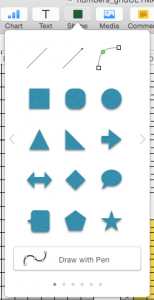 To make them editable, click on the shape, go to format menu, highlight shapes and lines-> make editable. Click on the shape and in turn on the format symbol below in the image below, and windows become available for style and arrangement choices 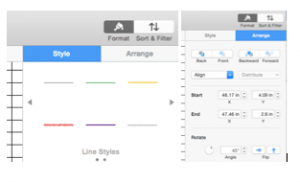 The knit and purl symbols on the left of my first chart utilizing line with arrow shapes are standard ones. The right side uses a dot for purl stitches instead of a line, and that began to make the whole more readable to me. One drawback is “shapes” do not seem to respond to any copy and paste demands and I had to draw each individually. I preferred to place them outside my chart. Guidelines then appear to suit for easy resizing and the resulting edit may then be dragged and dropped into the appropriate location in the chart, readjusted as/if needed. Color palettes for drawing appear limited to the built-in shades; toggling between available colors may be accessed by clicking on the dots below the pen tool in the first illustration above.  In the chart, purple lines indicate stitches brought forward, yellow the stitches brought to back when working the cables. The number 10 in the left-hand column should be a one. 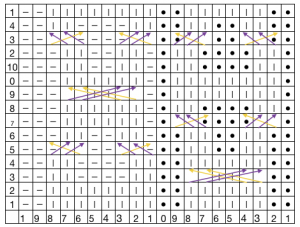 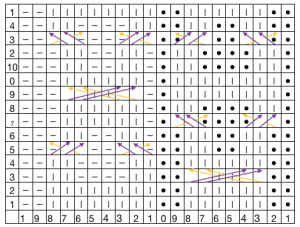 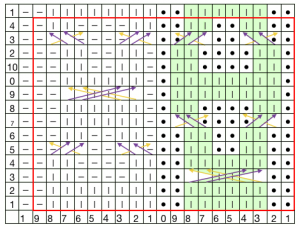 Utilizing the pen tool in shapes menu to draw custom cable crosses and filling them using the option within the numbers program moves toward an all color chart_ far quicker than using lines and bucket fills. The red segment indicates knit stitches traveling in the back for the cable cross 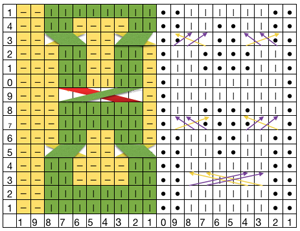 A lot of information is available on creating reversible cable fabrics using ribbed configurations. I thought I would play with knit/ purl blocks rather than vertical rib lines. The initial chart was begun in Intwined, with bucket tool filled in Photoshop to extend colors within cable crosses. The red border outlines the pattern repeats. Alternate right side rows are shown; all wrong side rows are worked as the stitches appear (knit stitches are knit, and purl stitches are purled). Here the cell colors happen to be reversed from their use in the above, the yellow is used for knit stitches, the green the purls. I opted to indicate knit stitches by color only, no symbol.

This is the resulting swatch, in random acrylic yarn, with varying numbers of rows in between cable crossings my plan is to create a scarf in significantly thicker alpaca yarn, a strictly HK fabric. The photo shows both sides of the fabric. 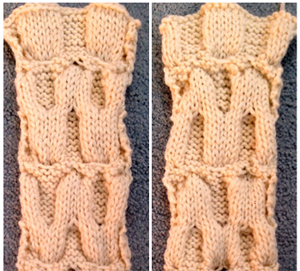