Many of the symbols associated with both hand and machine knitting cannot be separated from the history of lace frame knitting. In 1764 an eyelet lace attachment was invented for hand tooling transfers on the existing knitting frames, and nearly 200 years later the first home knitting machine appeared, the Brother 585, in Japan, with an accompanying transfer carriage.
Mary Thomas, a hand knitter, began to explore the need for symbols in the 1930s, these are found in her book of knitting patterns, first published in 1943 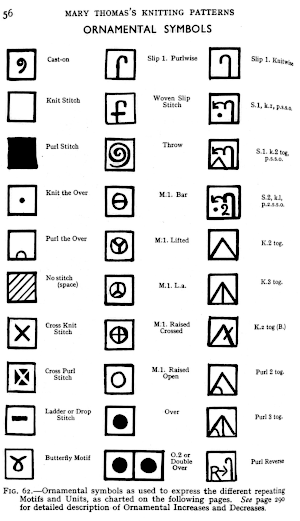 Japan’s contributions to lace patterning in particular are readily available in early punchcard books for Toyota, Singer (Juki), Knitmaster (Silver-Seiko), and Brother, expanded over the years to include larger repeats for use in electronic machines.
When Brother first published their list of symbols, they used ones as given for hand knitting, and it took a while for them to catch up to reversing the symbols to represent transfers on the purl side. They are seen here showing illustrations of formed stitches for both knit and purl sides, with the direction of the symbols often matching the knit face, as seen in the Brother Home Study Course. 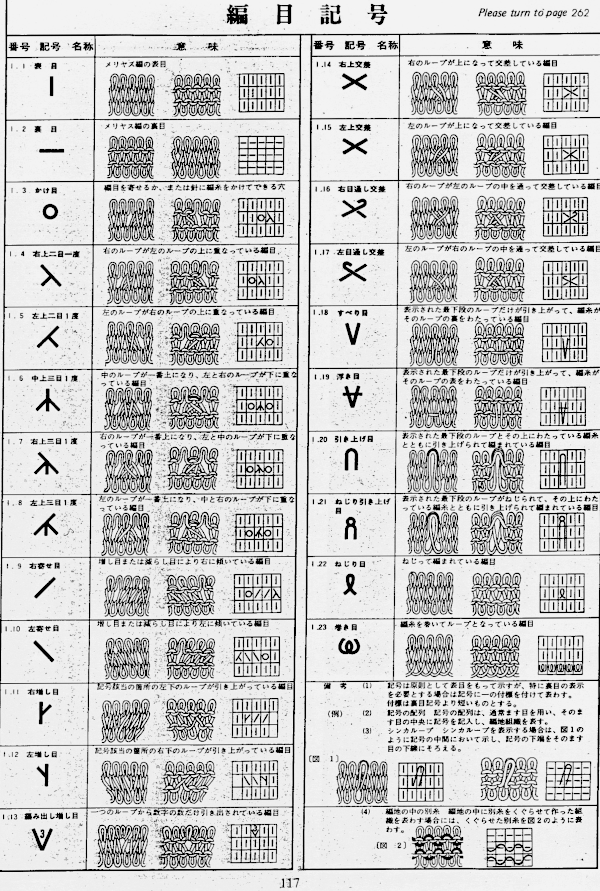 A clue as to surface being represented is that it is a convention that vertical straight lines | represent knit stitches, horizontal ones — knit.
Hand knitting symbols have proliferated, are not always consistent with functions assigned to them. The latter varies depending on the part of the world hard copies of patterns have been published, and there is increased potential for DIY meaning assigned to symbols in an era of self-publishing patterns and software that allows one to create their own.
A cumulative, extensive collection of symbols may be found @ http://www.knittingfool.com/Reference/KF_Symbols.aspx
My first exposure to symbols and textures provided in addition to paint functions on gridded canvases with cells that could be adjusted in size and zoom, along with drawing in repeat, was to Cochenille Stitch Painter back in Commodore Amiga days. My last use of the program Windows gold version was in 2012, I was never interested in the less supported and updated Mac version. These illustrations are from its manual at that time. The knitting and crochet symbols were said to follow Japanese standards. 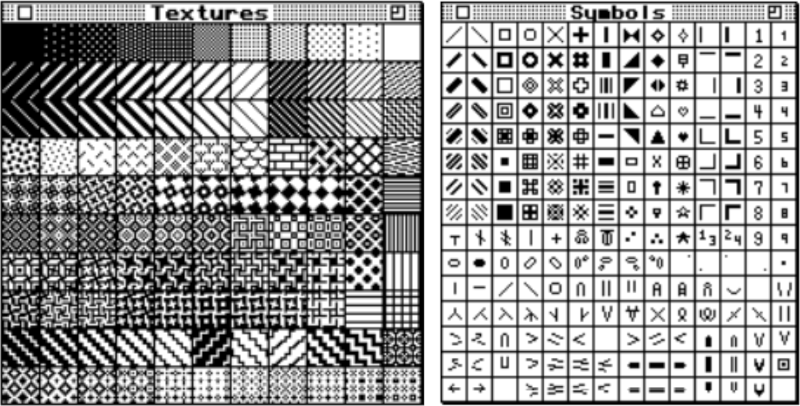 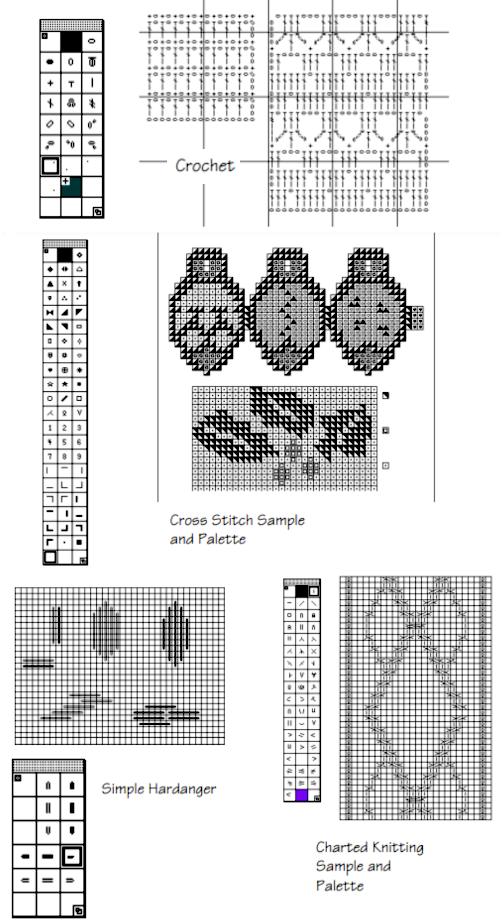 My teaching days were in a Brother punchcard lab with a couple of 910s available for final projects. Punched holes and black squares seemed to be more than enough to meet any machine knitting needs.
Programs like stitch Painter and DAK offer symbols as alternative palettes. Outside either universe, the availability of fonts whether free or for purchase has varied over the years.
As I published posts, I began to create charts that needed symbols to represent stitch movements or actions. My most used font for this purpose has not been available for download for several years. This is its associated keyboard chart, from 2008 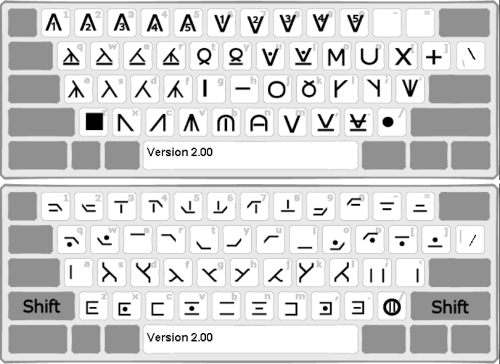 Knitter’s symbol fonts by David Xenakis,  were enclosed in frames, though extensive, I did not find them helpful, a sample: 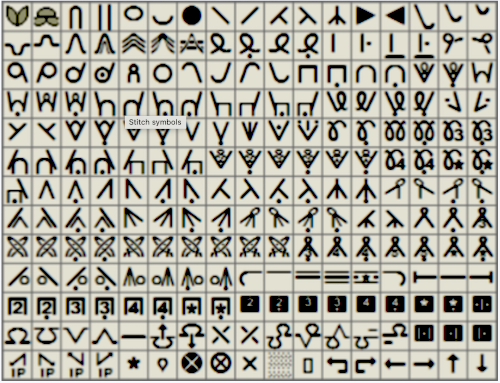 The company has trademarked their ascii based font as “Knitwrite”, info on using the symbols may be found in their stitch design module manual pp. 251-276. The pencil tool is used to draw with them, here the symbols are viewed in color in the associated keyboard

Cables symbols and their use are explained in pp. 284-292, a sample illustration of the potential appearance of a work in progress

Programs for purchase at this time: envision knit, is available for MacOS 10.11 through 12 (Monterey) and Windows 11/10/8/7/Vista, offers a free demo, may be purchased for $99, from their online manual: 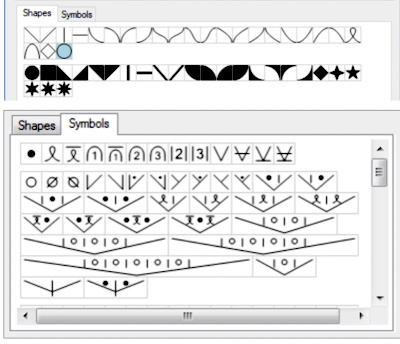 iPad and iPhone users: Knitting Chart is available for use in a few ways, Requires iOS 14.0 or later, the ad free pro version may be purchased for $15.99. Its symbols are familiar 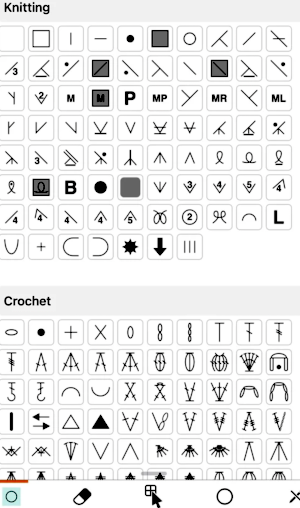 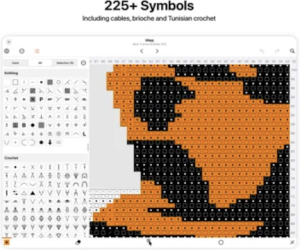 but other attractive features include illustrating crochet patterns in the round (done here using Illustrator and a for purchase font ), and row by row written instructions for charts. The latter was a draw for me with Intwined Pattern Studio, which still maintains a website for its purchase, but has not been supported for Mac since it failed there completely in 2013, and supposedly runs in Windows up to version 10 on both 32-bit and 64-bit operating systems. There is an associated Ravelry group with nothing shared in 3 years, I would caution against buying it.

Knit fonts that are still available, but may be problematic or not display properly in the latest OS, for purchase: https://stitchmastery.com/fonts/https://www.myfonts.com/fonts/adriprints/stitchin-crochet-pro/
https://www.myfonts.com/fonts/adriprints/stitchin-knit/
Sconcho is a GUI for creating knitting charts, it is free, for Mac OS 10.6
Some symbols in hand knitting and foreign symbol charts may be found mixed among Webdings and Wingdings, a printable cheatsheet @https://www.thespreadsheetguru.com/blog/ 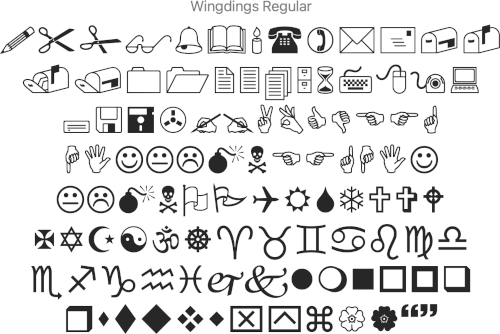 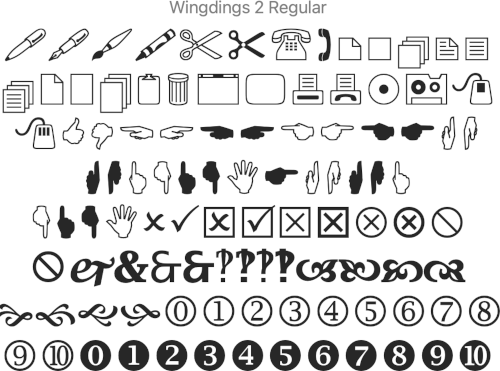 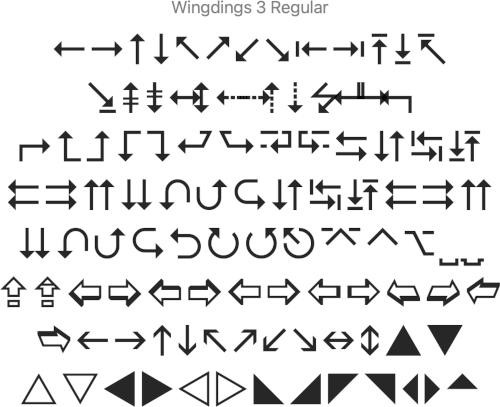 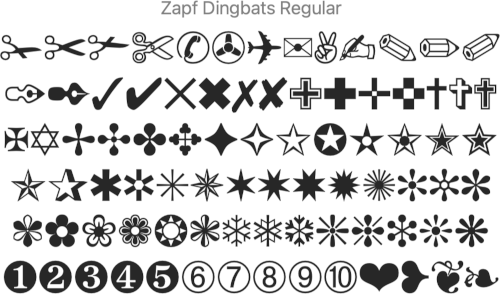 Commercial machines like ShimaSeiki use a combination of symbols and color-coding to program needles, cable crossings are represented by straight-line color blocks 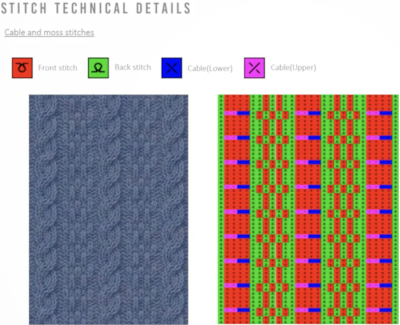 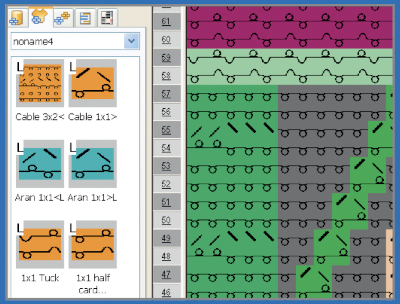 Limitations are encountered when using symbols in any self-drawn chart if there are no bridging units between cell units both horizontally for cables, and vertically for stitches and textures worked between both beds.
In machine or hand knitting charts, an alternative is to use color to indicate crossings. I wrote experimental posts in 2015, in reference to knitting them in fair isle 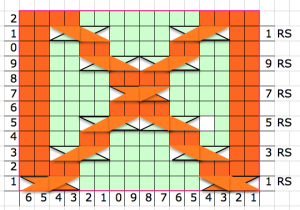 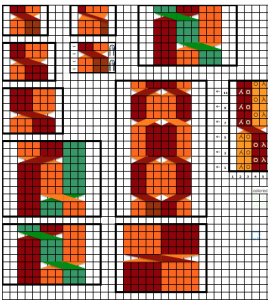 Long since then, I have no longer had access to Excel, the topic may merit a revisit using Numbers.
An interweave article was published in 2018.

Additional links including pixelated lettering fonts, care labels, alphabets in knit stitches, and foreign symbols may be found in post

Things get more complicated if it is necessary to represent stitches formed on a grid and the relationship of needles on both beds to each other. One method presents the information in a linear manner such as in this instance, 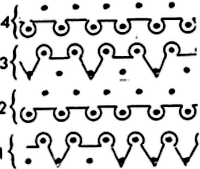 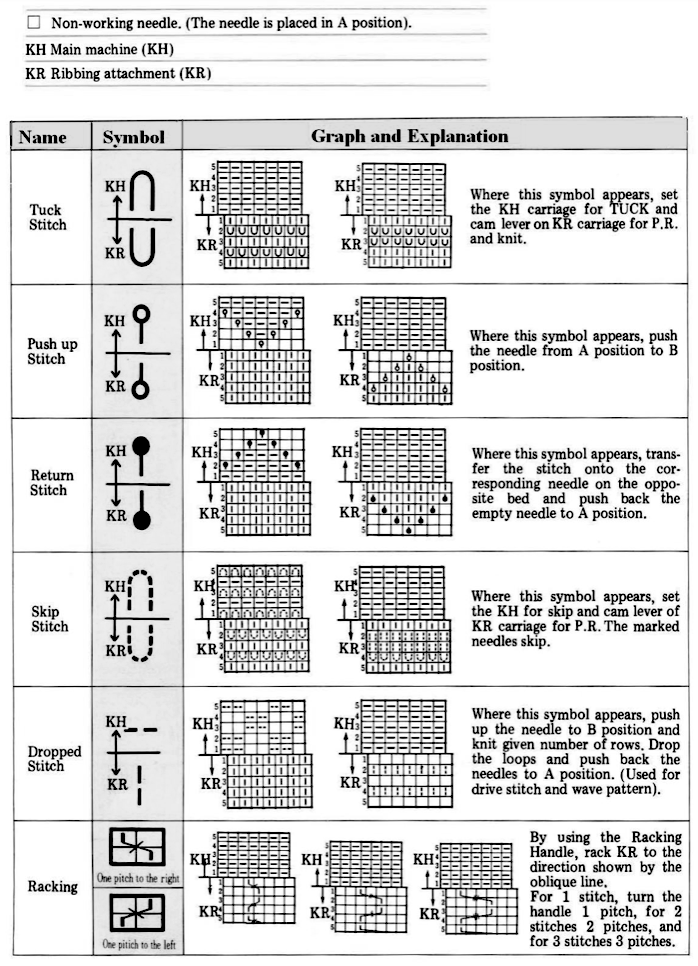 DIY charts for double bed knitting are left to invention for the sake of clarity or meet limitations of unclear symbols being automatically scaled to fit in cell sizes.