Tuck and slip stitch are commonly used to produce very effective textured surfaces often accompanied by color changes. Those color changes require knitting with yarn always in the A position in the sinker plate, and color changes are made by replacing the yarn in that position by hand, or by using the color changer. Fair isle and thread lace operate differently, as they carry and work with two yarns at once. Some of these samples were also presented in the post on fair isle variations
For textured surfaces using wire for one of the two colors makes the fabric moldable, here 32 gauge stainless steel wire is used as color 2, card#2 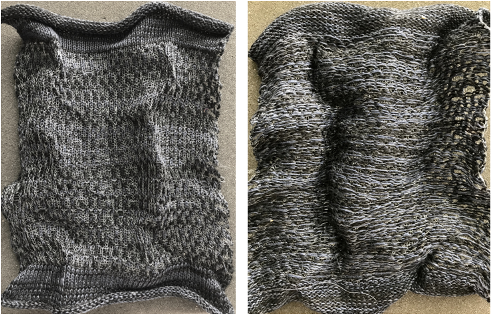 Using end needle selection when there are needles out of work results in single stitch width vertical columns of color that are planned in this instance as guides for sewing machine stitching lines. The width of the fabric is limited because of the number of needles actually knitting the pattern, but the technique offers the opportunity for a coordinated bicolor fringe with placement on the motif from casual to very deliberate, either side may be chosen as the “public one

What may be firing in one piece could provide a tube for insertions on either side of the knit.
The fringing here is created by having needles out of work with one or two needles in work at their outer edge anchoring the deliberate floats on one side, trimmed when the piece is complete, before felting. The triangles are formed with single decreases followed by increases to reverse the shaping keeping the fringe edge needles in a fixed position. There is some rippling along the shaped edge, but the remainder of the fabric is fairly flat. Felting creates a reversible knit, shrinkage, possible stiffness, and potential limitations in the width of the final fabric are considerations when planning wearables. These factors become irrelevant when the goal is sculptural form.

Creating blistered surfaces the easy way,  leaf pattern variations: poly-cotton and raffia on the bottom, fishing line as the second yarn line on top. I have found the line for 6lb or fewer works best. The knit is flat. 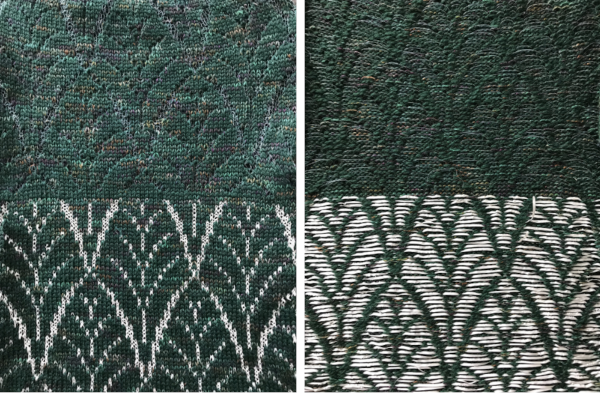 Felted rayon chainette and wool; when the main color is wool and the rayon renders the floats there is minimal blistering 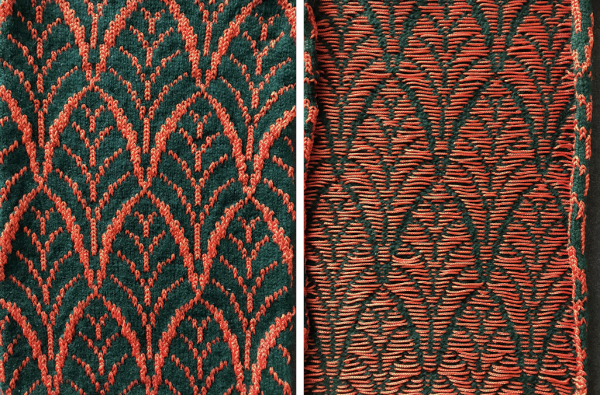 the result from reversing the yarn positions creates more bubbling 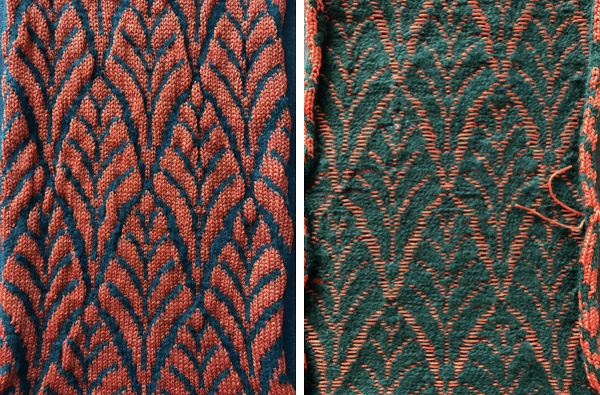 Here elastic is used as the second color in the thread lace setting.

Using wool and acrylic non-felting yarn, the original mylar repeat was altered to twice as long 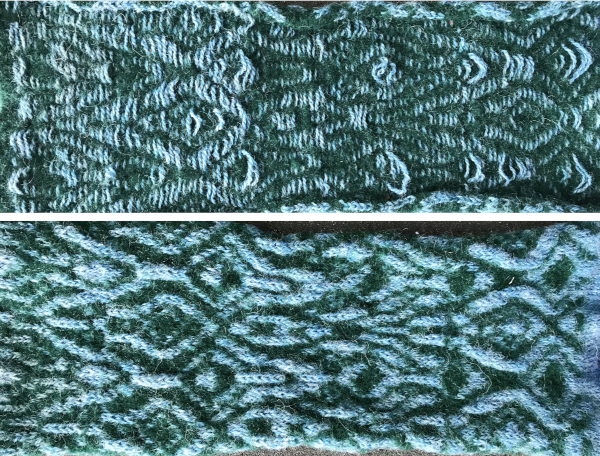 and rendered twice as wide as well 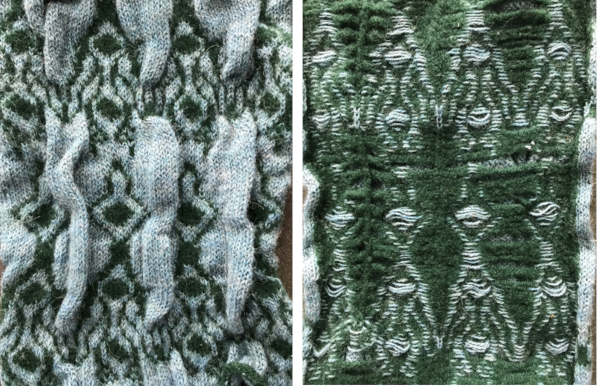 the difference in finished width 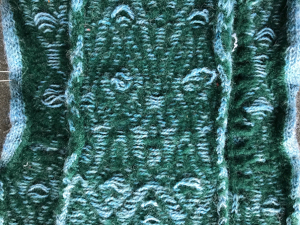 The yarn positions in two color single-pass knitting, remain fixed in their relationship to punched holes. In fair isle patterning, the back feeder, usually labeled A, knits the ground on non-selected needles in the B position. The yarn (red) in the forward, B feeder, knits the stitches on needles selected to the D position which correspond to punched holes or black squares in a mylar, black pixels in a computer file for download. In thread lace, the back A position yarn knit both yarns together, while the forward B position yarn, red thread, knits the forward yarn/color, with the other yarn creating the single set of floats behind it.

Not all machines have a thread lace carriage, I use a punchcard model KC on my electronic machines
Sinker plates in different model years may also differ.
In terms of blistered fabrics in 2 colors using elastic yarn as one of the two fibers, the results in FI and its double sets of floats are shown on the left, the thread lace version with only the elastic creating the single float on the right. 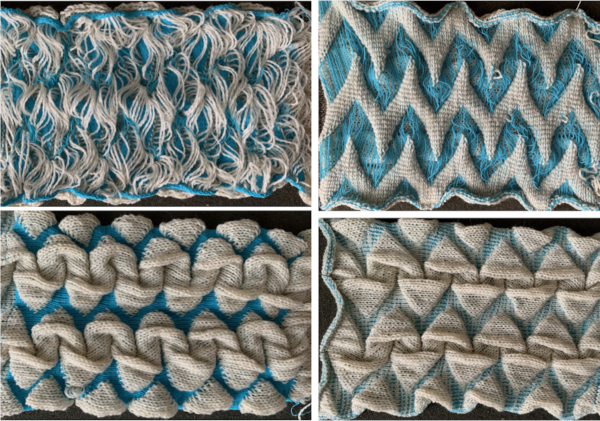 Thread lace patterning may also be used with a thin, non-felting yarn knitting the areas of the pattern intended for the 3D texture in the forward yarn position. The rear position yarn needs to be wool or other fiber that will felt and shrink with processing. In the finished piece, the wool floats may be left in place, trimmed, or the thin shapes may even be trimmed out leaving openings that do not ravel 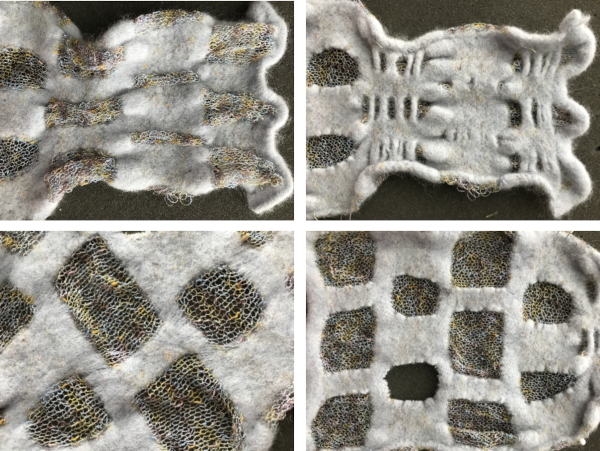 In addition, large thin fabric shapes can be stiffened over enclosures to create permanent effects in sculptural pieces.