Lace on the machine can render beautiful fabrics that closely resemble hand knitting, but programming very long repeats is a challenge both in placing every hole in the correct square in a punchcard and in programming individual pixels on a mylar or as pixels for download correctly. I found the “leaf lace” repeat below shared frequently on Pinterest and thought I would test the approach discussed in the post on using numbers and gimp to create images for electronic downloads. Because it is 16 stitches wide, it is not suitable for punchcard knitting, which requires a factor of (4, 6, 8, 12) and up to a 24 stitch maximum width.

The published pattern on the left is shown as shared on Pinterest. In turn, in was captured, opened in Gimp, and magnified. After a threshold adjustment, it was converted to a BW indexed, scaled to its 16X96 original stitch and row count, and then saved in 100% magnification result for the possible electronic download. 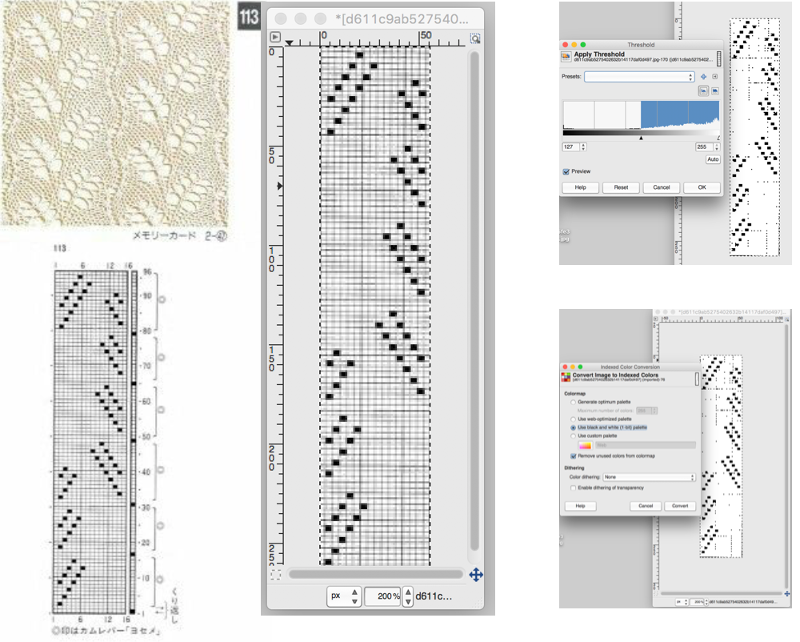 The published repeat is intended for use on Silver Reed knitting machines, for using it on Brother machines, the initial 2 blank rows are shifted to the top of the pattern design.
On the far left below is the first BW processed single repeat isolated from its source. To its right, it has been adjusted so the first row is a preselection row for the lace pattern, and the full repeat ends with blank rows (Brother KM characteristic). The latter in turn was saved as an image for download.
Since the leaves change direction in the way they lean, the spacing between each pattern swing in the repeat is actually 3 all blank rows, not the “standard” 2, including at the top.
The bottom half begins with the first row resulting in transfers to the left, while after the first 3 knit rows the transfers will begin to the right.  The plan was for me to use Ayab for knitting a proof of concept swatch.  In order to achieve that, the full repeat is first flipped horizontally (ayab will auto mirror it,  so starting with it this way it will be in the correct orientation when knitting). The mirrored repeat may be used in unaltered machines as is with LC operating from the right, with KC operating from the left (not possible in ayab without adjustments). The full repeat consists of 16+14+18+16+14+18= 96 passes of the lace carriage, for every 12 rows knit. My sample was programmed horizontally for 3 full repeats, the width of my planned swatch. I added one additional needle in work on each side, with the LC end needle selection canceled, allowing for the full pattern as programmed with a single stitch all knit border on either side 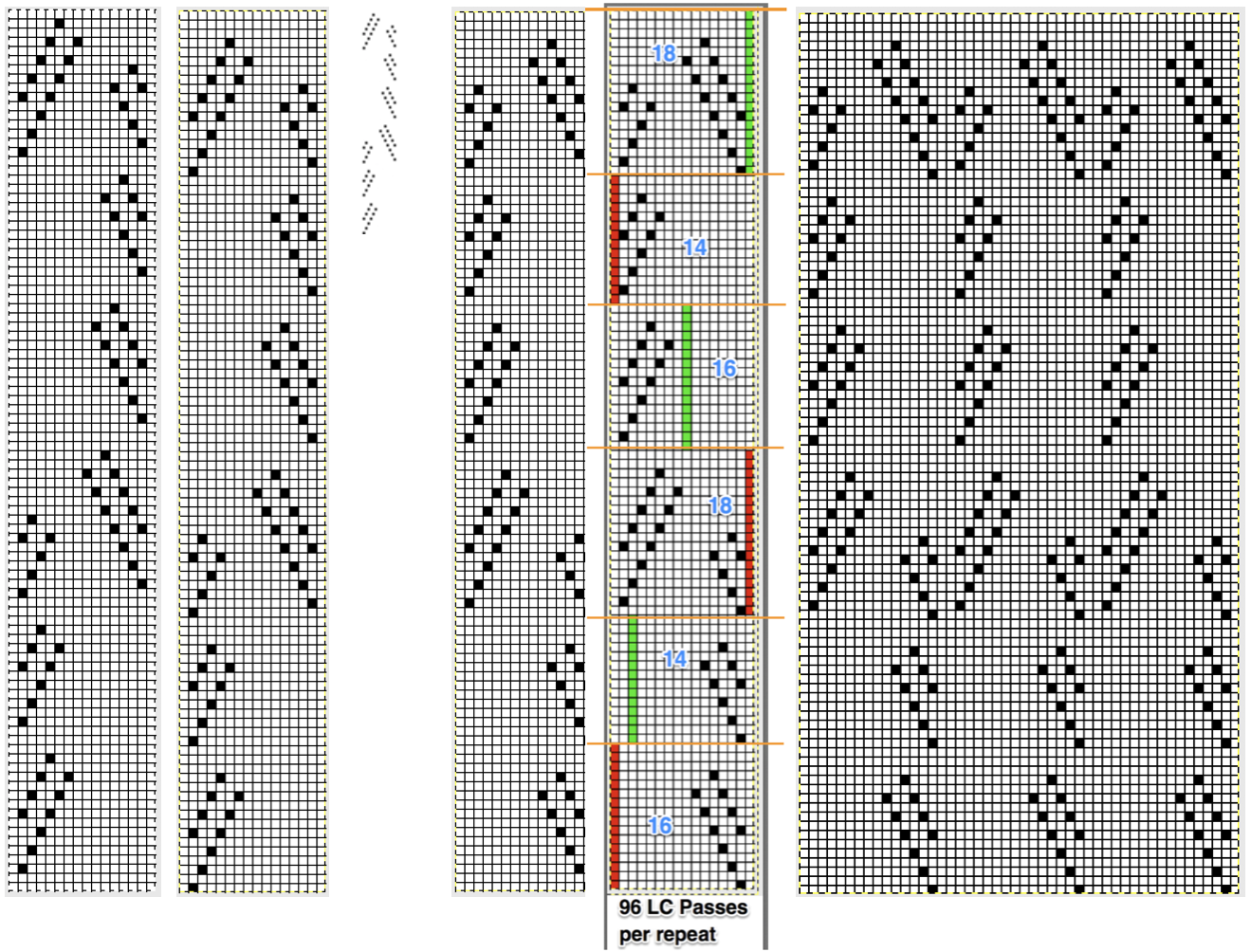 A tightly twisted cotton yarn did best in terms of handling the multiple transfers and not resulting in split stitches or breaking. I had occasional selection errors, seen in the center panel at the top of each repeat (my common experience with the interface), but the repeat itself appears to be sound. 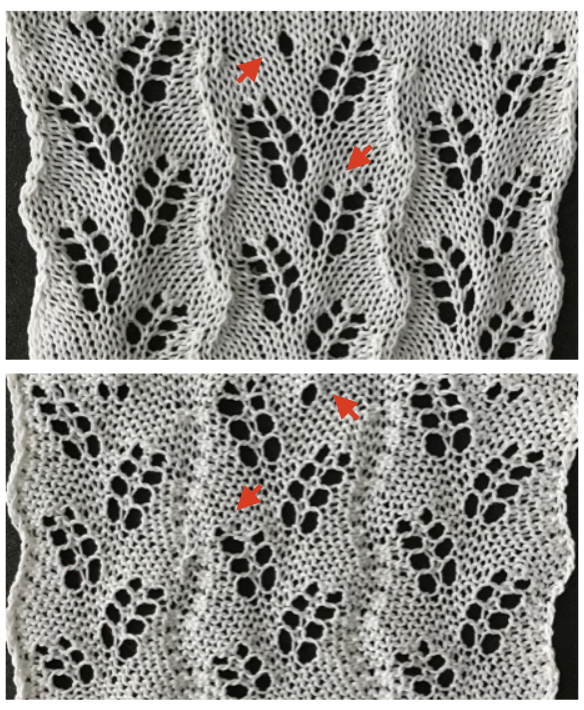 Lace repeats that have even numbers of rows for both and LC transfer and knit ones are easy to follow. Punchcards are also easily annotated and if knitting is interrupted needle selection is easy to return to or restore if necessary. In electronics, there may not be any memo to indicate row #  location for each carriage pass in the pattern, or when to switch carriages. Because in this instance there are so many transfers (some of the multiple stitches) between knit rows and dropped stitches are best corrected as noticed during knitting if possible, I created a “cheat sheet” of sorts to help keep track of actions. Each block outlined in red here represents one full repeat, read from the bottom-up, with blue borders at the center and red at the end of each half sequence. A visual check at the end of each segment’s # of rows in the series is well worth it to prevent unnoticed runaway dropped stitches and large holes. A check-in box next to # could indicate the completion of transfers. and a number added manually in that same row for that sequence, record the row on which knitting was interrupted ie. stopping on row 8 out of 16 to fix dropped stitches would be a reminder that 8 more LC passes are required before the next visual check. 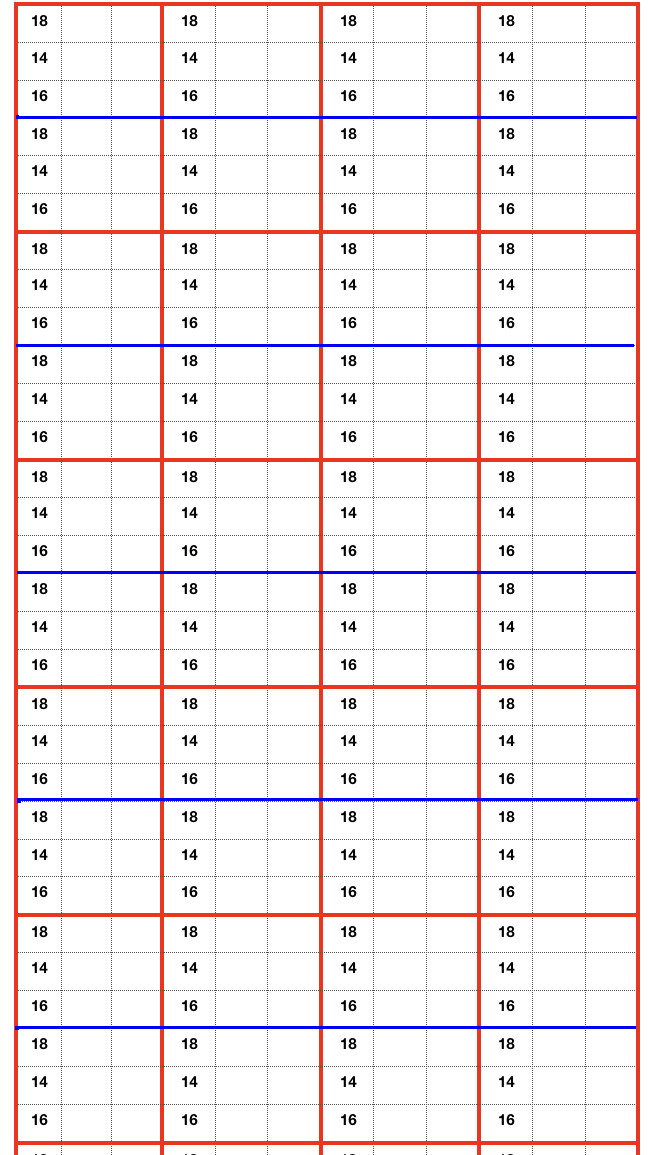 9/23/18 In now have been experimenting on a 930, where each pass of the LC is actually tracked, akin to following numbers on a punchcard.  Built-in patterns also offer a memo window, which will alert the knitter as to when knit rows are due

In testing the pattern with img2track I found the LC passes are still counted, but the memo window is absent upon download. I generated a chart in Mac Numbers, reads from the top-down, expanding on the one above. It illustrates the number of LC passes (left column) required to produce any significant length of fabric.  Patterns such as these are not for the faint of heart and require a friendly yarn. 2168 passes of the LC (33 full repeats, outlined in green; red line separates half repeats) are accompanied by 396 rows of “actual” knitting.

In actual knitting, the pattern advances from row 1 to 96, and back to 1 again. A check-off list can be much simpler if one is desired. The numbers on left appear in the LC window in a 930, when reached 2 rows are knit with the KC. The numbers at the top reflect completed repeats. Boxes can be checked moving to the right as those rows are completed

Another option is to download the pattern in img2track, and then enter memo information prior to knitting it. Two youtube videos that show how to enter memos in machine models that allow it, 930 included  https://www.youtube.com/watch?v=S0tXNT76v10    and  https://www.youtube.com/watch?v=nR8MheT5Bao. The number 2 may be entered after numbers on the left appear in the LC passes count window, and provide an easy guideline to follow. And this is what testing lace patterns can look like. In this instance, a tighter stitch tension, a bit of change in weight, and visually checking after each row of transfers brought me some success. This is not a stitch pattern that lends itself to easy “repairs”. 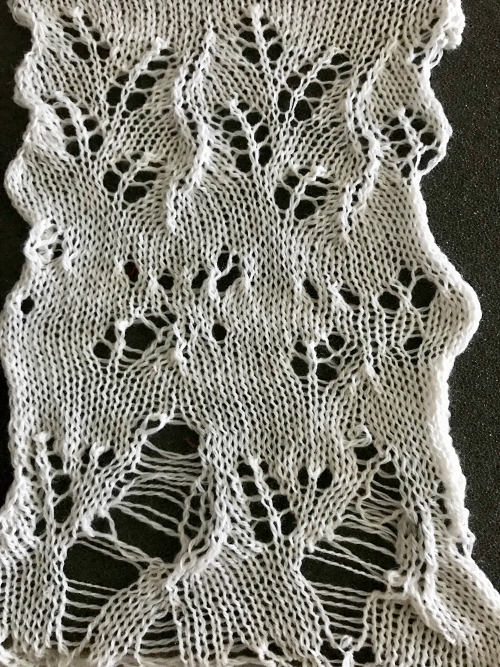 A more successful sample knit also on the 930 using the shared repeat as given, knit in wool-silk 2/18 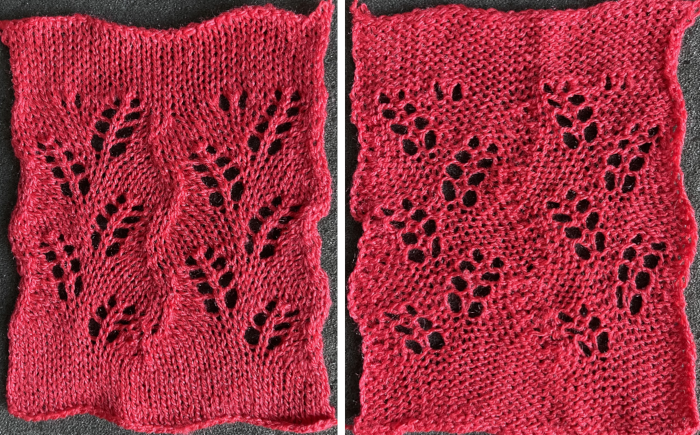