Several years ago, this punchcard was shared on Ravelry as one that was problematic in execution on an electronic model using Ayab 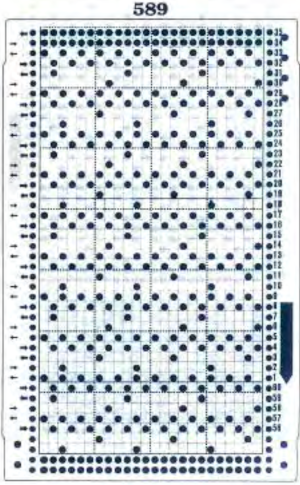 the supposed related swatch pictured in the publication 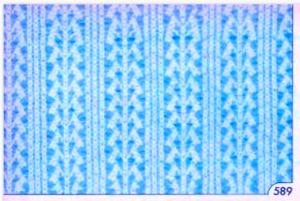 At the time, I made a long, convoluted effort to produce the fabric. I am returning to the topic and comparing 2 cards in this post, the original 589, and a new-found cousin, 259. Looking to the published cards for clues, remember that markings for carriage movements related to the first design row at the bottom of the card begin on the left of the card, above the Brother line numbered 1 on the right. The start of both cards:

Lace patterning is unique in punchcard use. The card does not begin with the reader locked.

As the carriage moves to the right, the card will advance a row. 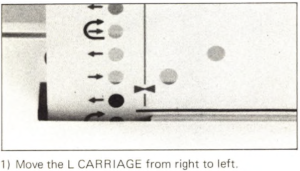 The lace carriage will begin to move in the direction of the arrows, making transfers on preselected needles in the direction of those same arrows as it moves away from and returns to the opposite side.
A typical pattern for mixing weaving and lace, seen in 259, usually starts with a blank row, followed by 2 rows with lace transfer markings, and a single every other needle arrangement row intended for the weaving pattern, repeating in varied sequences for the height of the card. The source for the repeat is  Brother punchcard pattern book volume 5. Due to the added experience I have acquired in working with spreadsheets and converting lace punchcard repeats, it took literally minutes as opposed to hours to produce a working repeat for use on my now 930 and the desired proof of concept. It is interesting how our perspective and skill can evolve over time. This is the new, “quick” version,  beginning with flipping the card segment over horizontally, a requirement with Ayab or img2track on my 930. 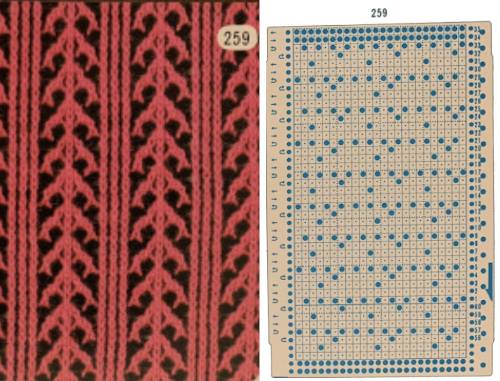 259 shows the traditional approach combining the two techniques that take into account the fact that when the second selecting carriage starts to move from the opposite side, the punchcard does not advance, repeating the same preselection. Added discussion of the differences in repeats for both machine types may be found in the post: Doilies: Lace meets hold and goes round In this instance expanding the punchcard repeat with extra blank rows to allow for extra LC passes to maintain proper transfer direction is not necessary, but the repeated punchcard selections need to be taken into account. There are 2 options for starts: if beginning with lace rows, the first preselection row is from right to left with the LC, if beginning with weaving, the first preselection pass from left to right. End needle selection is in the KC is canceled. As knitting progresses, if an end needle is selected in the pattern push it back to B prior to making transfers in that row. The movements when working with two selecting carriages on the electronic are standard, the repeat advances a row in the design with each pass of the carriage. Here each carriage operates for 2 passes, to and from its original side after the first preselection row. I began my proof of concept with woven rows. The punchcard repeat has been reversed

The top swatch tests the repeat as given above, beginning with the weaving pattern. Mirroring the repeat also produced an interesting variation, as seen in the bottom test 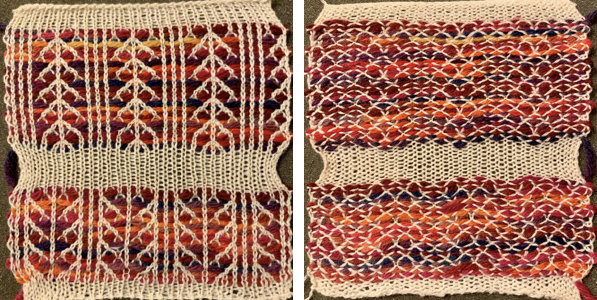 A review of 589, showed that it could be knit using each carriage for 2 passes as done above.  The same repeat as the one in the original punchcard, mirrored,

produces the same fabric on the 930 as with using the more complicated separation methods described further below. The chart depicts the desired actions. My first row was knit with the KC set on KCII, preselecting while knitting a plain knit row from left to right, followed with the first lace transfer pass also from left to right

the electronic repeat and its .png

Analyzing the card, sorting out possible repeats follows since mylars or bitmaps for download often only require a single repeat of the pattern. If you are not used to doing this, sometimes beginning with recognizable vertical ones first is a bit easier. The first problem: matching the arrow markings beginning just above row 1 mark on the right, it appears the first set of transfers should be to the left, 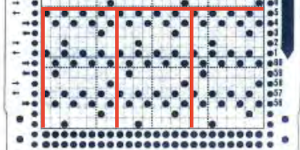 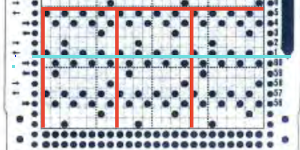 The pattern is simply not workable as given using both carriages selecting needles from opposite sides of a punchcard machine, each moving for 2 rows.
Reworking the repeat for use on the electronic in order to use the LC for four passes, beginning and returning to the left-hand side of the machine: the movements of the respective carriages on both models are plotted out, beginning with the theoretical punchcard one, mirrored horizontally, on the left, expanded in the center for the electronic, with the final repeat on the right. I now use different color cells to represent the direction of the transfers, here red for ones for those to the left, green for those to the right. The grey rows indicate blank ones that are required for the lace carriage to perform the necessary selections, transfers, and then to complete its return to the left side of the needle bed

the smallest, single repeated in width X 2 for use on my 930

Extension rails must be used as both carriages engage the belt. The LC operates from the left-hand side for four passes throughout. The KC from the right for 2 passes each time. It advances the design by one row for each pass, preselecting needles or blank rows depending on the presence or absence of pixels as it would in any other fabric type. End needle selection is canceled. The weaving yarn is laid over the groups of every other needle in D position. A quick proof of concept swatch, the ground yarn may need tension adjustments for the best result 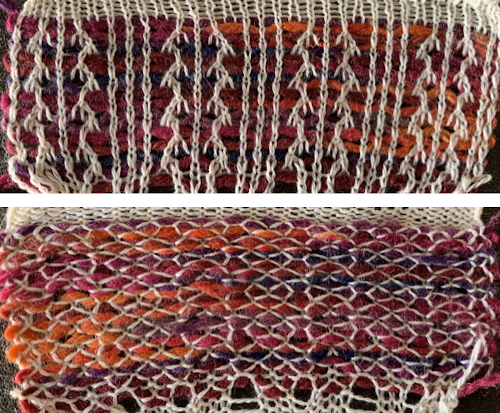 an interesting variation with the above repeat flipped horizontally

the mirrored repeat is used in the top swatch, any dropped stitches will result in floats. The repeat prior to mirroring was used to knit the bottom swatch. Dropped lace transfers may be missed behind the laid in thicker yarn. Transfers may need to be made manually if they continue to be a problem, especially if the ground yarn tension needs tightening in order to achieve the desired effect.

Starting the piece with 2 woven rows, rather than lace transfers: charting for working with the LC operating from the left for 4 passes, the KC from the right for 2 passes (worked on my 910, using mylar):

comparing the sequences for both starts, weaving on left, lace on the right 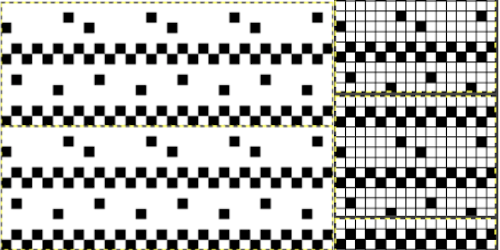 Patterning issues are not always due to needle selection problems. Weaving and lace pattern combinations may be tested in lace first to establish eyelet selection accuracy. Here the weaving test failures were due to a problem with the sinker plate. The weaving lever was working properly in one direction only. Check that both brushes are turning freely. If they are not, remove the screw and any fluff caught under them before replacing them and continuing to knit. Occasionally the lever that moves the brushes up and down fails and a new part is called for. Here, the hand technique success followed a change of the sinker plate 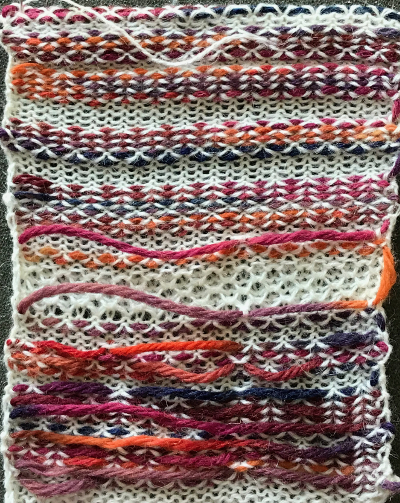 a sample using 2 different weight yarns; irregular weaving may require changing the yarn, or adjusting the tension used for the background yarn 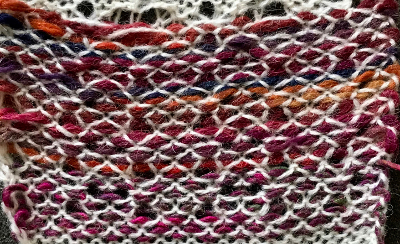 I like to test these repeats first in transfer lace, to sort out the best tension and yarn to use, errors in programming, 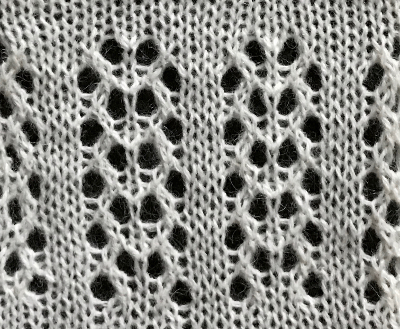 Taking another look at the original punchcard and those arrows on the left-hand side, a detail I had originally missed, they all start from and return to the right, the line thickness changing marking the alternate carriage 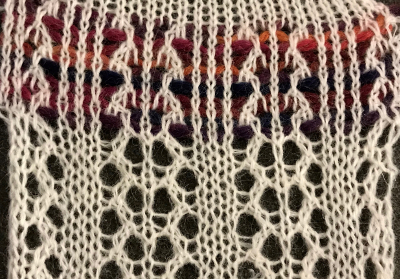 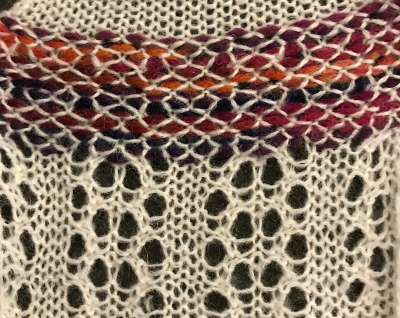 the knit, produced at the time on both my punchcard machine and with my 910 also requiring an LC release on its third pass, 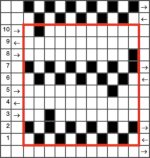 reflect all the transfers occurring in a single direction 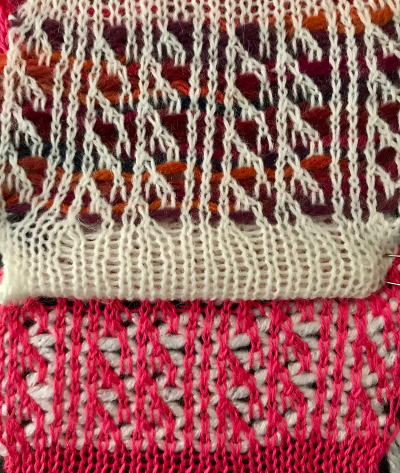