I created large-scale nonrepetitive image garments very early in my knitting career using Cochenille Bitknitter and Commodore computers linked to a Passap E6000. Over time my focus changed considerably, with any production knitting moving onto accessories as I began to make items for sale in galleries and in shows, most often single bed on a Brother 910. If knitting is a primary source of income, one needs to consider production time management, material costs, and what the local market will bear in terms of pricing.
A post, written in 2018, began to explore two-color-dbj-non-repetitive-images-electronic-kms/. At that time I did not have a machine model capable of using img2track.
An orphaned 930 entered my life, and with rare exceptions, over the past few years, my blog sample swatches have been knit using img2track, which I have found easy, reliable, with any programming errors due to the operator issues including learning the differences from 910 programming and remembering to actually use them.
No matter how long any of us have been knitting, there can be many aaargh moments both in everyday knitting and when exploring new techniques.
I have a supply of lovely 2/48 cash-wool in royal blue, black, and grey. Three strands worked predictably on my punchcard machine in a series of my spiky scarves, shown in progress on the machine. 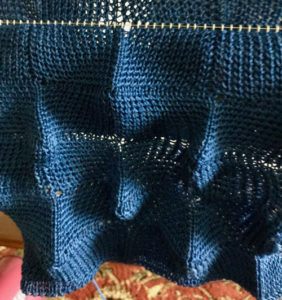 Nearly all my previous dbj pieces have been knit on a Passap E6000. The 930 experience for such repeats is new to me. With some help from Tanya Cunnigham in reviewing steps required when using img2track, I returned to cellular automata repeat saved years ago.
I encountered problems with the triple strands of blue not feeding evenly, here both colors were picked up by the changer accidentally, I realized the issue, trying to unravel the row of knitting produced this 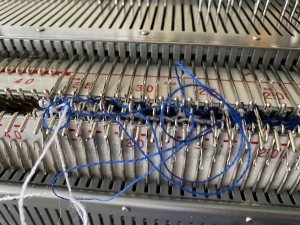 That provided an opportunity to decide I preferred the reverse color placement as well as wanting a thicker ply for the white, resulting in twice the fun with 2 colors, and another scrapped sample 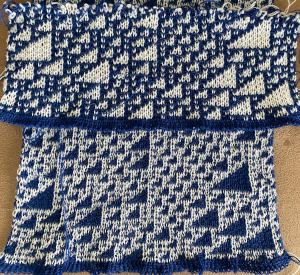 Switching the white to a single-ply thicker yarn made its stitch formation far more manageable. The blue however seemed to have a single strand of the three with a propensity for catching on gate pegs. I tried tension adjustments, the usual tips in managing static. At about row 1,000 out of 1288 rows, I realized I had an issue with both yarns being caught on gate pegs. In trying to lift the stitches off, the yarn broke but gave with no immediate visible clues, the dropped stitches and a lovely hole, as a result, appeared when knitting had progressed far enough below the current knit rows. On the left, the work is shown still on the machine, while on the right, it is off the machine, and in the process of a patch job with a temporary accessory and stitch holder in place.

I was able to achieve a reasonable repair on the knit side, but the birdseye pattern on the reverse is a bit scrambled.

For folks that are not familiar with electronics and are curious, the 930 has the smallest memory of the later Brother electronic models. My pattern repeat is 74 stitches wide by 644 rows in height. The user manual explains: the KH-930 takes just a few seconds to load the track because the memory holds only 2 KB of data (about 13000 stitches). Later models have a much larger memory (32 KB). The KH-940 and KH-950i require 42 seconds to load a track. The KH-965i and KH-970 load only the requested pattern, so the loading time depends on the size of the pattern. img2track indicates progress as the data is sent to the KM. When the pattern has finished loading, the KM should beep, and show the green READY light and a 1 in the display (for row 1). The program automatically chooses Selector 2 for a single image and centers it. You may change this by using the normal pattern selecting process on the knitting machine, choose Selector 1 for all-over patterning, or use Selector 2 and choose a different location on the needle bed to center the pattern. If your pattern was divided into more than one track, you will have to load successive tracks when completing the previous track, specific instructions are given for programming subsequent tracks. My pattern was broken down into 4 tracks.
The cable used for downloads to the machine is used externally, no alterations to the machine’s hardware are required as when using Ayab on the 910. The pattern is stored in the machine, so the computer needs to be awake only during downloads, not constantly as in programs that use knit-from-screen.
Each track for 2 color DBJ using the KRC built-in separation is entered in numerical order as a new pattern with first-row preselection from the left to the right and first row knit from right to left toward the color changer. If the repeat is not planned for the number of needles in use, any position or change to all-over design needs to be re-entered, and the KRC button must also be set again.
Cam button settings are set according to the chosen dbj variations for either or both beds. End needle selection is usually canceled. In some patterns using it can create an interesting beaded edge on either side, which is worth testing on small samples to determine one’s preference.
I like to plan my pieces beginning with the dark color, plan my repeats with the deliberate placement of both colors, and any scaling in the pattern BMP prior to download, using Gimp. I also prefer to have color 1 as the dark, color 2 as the light. The default in the Japanese DBJ separation uses the light color, white squares, as color 1. Out of habit I color reverse my images so my first preselected row from right to left can just knit my black squares rather than the white, and I can continue my motifs as I intended while having machine prompts for each color also match.
Pausing knitting is easy as long as the needle selection is not disturbed. Ending with COR avoids any confusion about which color should be used next. Starting outside the set mark, turn the machine back on, and simply continue in pattern with appropriate color changes.
Tanya Cunningham manages and moderates the membership, settings, and posts for the Img2track – For Machine Knitters group on Facebook.
These were her tips and reminders to me for handling pauses in knitting immediately after the following track in the sequence is first downloaded: let’s say that either some needles got pushed in or repositioned, or for whatever reason, you don’t have certainty that the last row of needle selection is reliable, and you want to “re-select” the last row before you knit it, the last track you knitted should still be in the memory, even though you’ve completed that part of the pattern.
1. Push all needles back to Pos B.
2. remove the yarn from the feeder, disconnect the K carriage from the R carriage.
3. Turn Change/Selector knob from KCII to N (NOTE, this will cause your PART buttons to de-select)
4. press BOTH PART buttons.
5. Move K carriage to right. No needles will knit, since all are in POS B, and both PART buttons are depressed, AND no needles will select, since you’ve moved the change/selector knob to N, and the memo will not record any advancement of row. (However, if you’re using your mechanical row counter, it WILL record a row, and one on the way back so plan to either disable the ribber arm or plan to turn the counter back 2 rows)
6. Now you will have to re-select the last row of needles for the track you’ve most recently knitted. First, verify that KRC is activated. Now, you will have to push the up/down arrow buttons to select the very last row of the pattern which will be an even number, and color 1. Depending on whether the carriage was moved in such a way as to activate the sensor enough to cause the memo to advance, you may be able to simply use the row that’s showing, but even beginning the movement of the carriage may advance it. To be sure, what I do is to advance (in this case to Row 1 Color 1), and then back up one row, using the arrow buttons.
7. Move your Change/Selector knob to KCII, be sure to move outside the turn mark. Verify KRC; memo says last row, color 1; both PART buttons in. Now, move your carriage right-to-left, to select the last row of the previous track.
8. Load color 1 in the carriage, load next track into the machine, KRC selected.
9. Now, as you knit to the right, you will be knitting the last row of the previous track, and selecting needles for the first row of the next track. Carry on.

In terms of generating cellular automata math-based patterns, the Wolfram website is a great place to explore repeats. A player, temporarily unavailable to Mac users is presently available, allows for the download of interactive demos in .cdf format. In terms of knitting any of the repeats, the most suitable appear to be ones that are generated in black and white to start with. Not all are, and at times changing the mode to bitmapped in programs such as Gimp can produce a glitched effect. Though the latter may be interesting and desirable to some, I prefer clean lines and diagonals along with identifiable shifts in the scale of any triangular components.

I am often amazed at the speed with which time passes, previous related posts: 2015/12/09/cellular-automata-charts-for-knitting-etc/
Previously knit repeats 2017/09/11/my-new-knitting-projects/

Weaving drafts may also serve as inspiration for knitting repeats. Posts with related content: 2015/11/28/weaving-drafts-as-inspiration-for-other-textile-techniques/, and 2018/07/02/numbers-to-gimp-to-create-images-for-electronic-download/. These images are extracted from a draft for an advancing twill. One may explore segment placement and color reversals easily using programs such as Gimp. 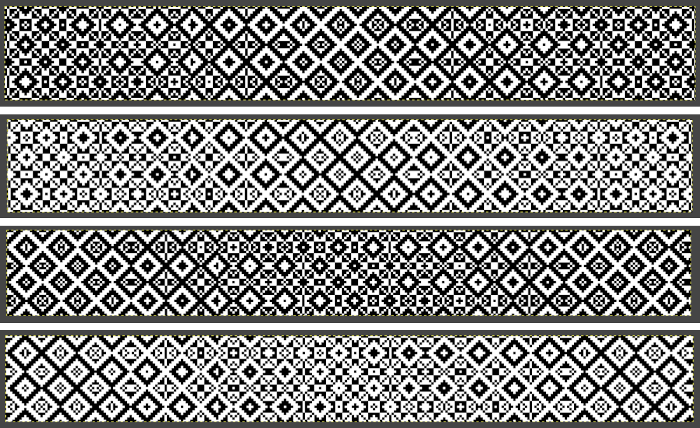 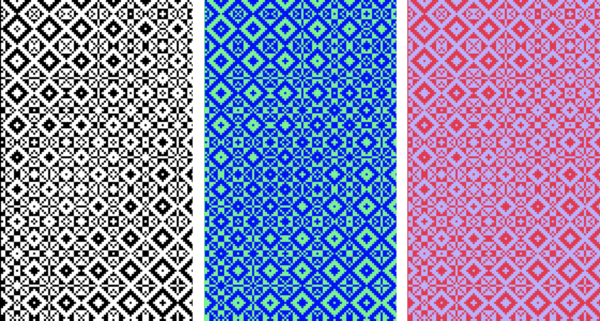 My planned test repeat is 76 stitches wide by 556 rows high.

One thought on “My first non repetitive DBJ explorations on 930”