A first look at Single bed scales made with stitch transfers: 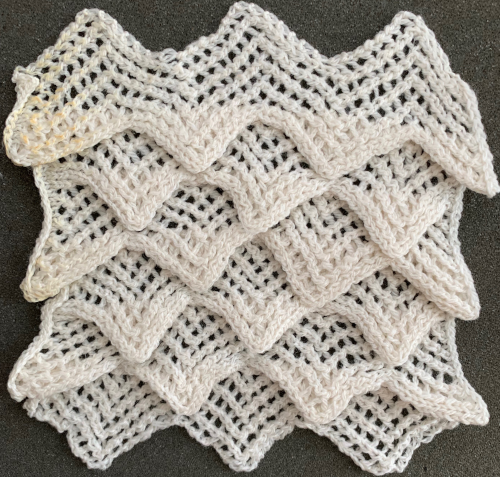 Another look at the repeat, here it is mirrored for use on my 930, and shown in for working over 72 needles knit border stitches on both sides.

A reminder: when transitioning from spreadsheet-generated repeats to indexing and then scaling them in Gimp, check that the interpolation has not been changed in the program since the last time you used it, it needs to be set to none for good results with minimal if any cleanup required. 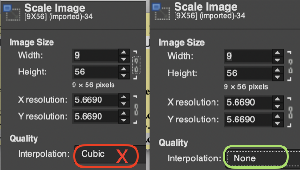 Analyzing what is happening: arrows on the left indicate the direction of the lace carriage moments. The LC makes 4 passes followed by two rows knit throughout with the exception when extra passes are required to place the lace carriage in the correct position for reversing the direction of the transfers.
The grey columns represent all knit vertical areas.
The 3 blank rows as opposed to the usual 2 in RC 27-29 and 52-54 respectively place the LC in position to reverse transfer directions, which begin to the left on the bottom half of the pattern, to to the right after the pattern midpoint is reached. The reversal helps to create a fabric that is not flat and produces scale-like projections. 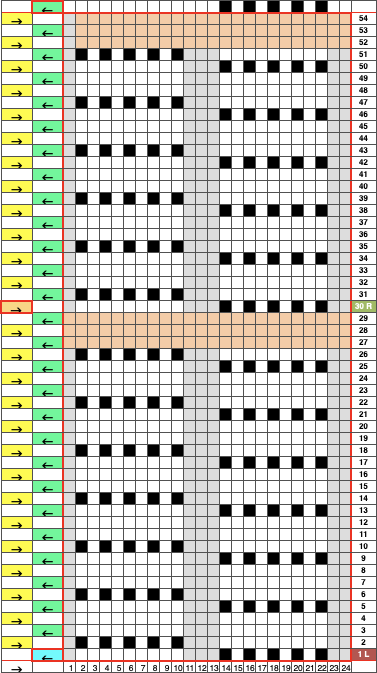 A reduced repeat before any mirroring or tiling: 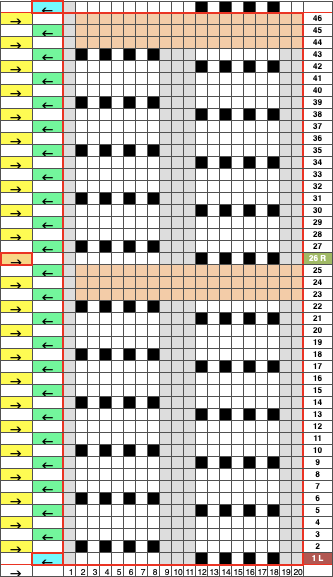 Whether the repeat requires mirroring or not depends on the machine used and the software used for downloads. The intention is to have the first row of transfers from left to right. Punchcard users, if the repeat is suitable, may punch and use it as given. The LC preselects on the first pass to the right, and transfers selected needles producing eyelets to the left with its second pass. In many electronic machine models, the pattern is actually opened as a FI repeat and the machine itself will automatically mirror the pattern horizontally so as to have lettering, motifs, etc. appear as drawn on the knit side. For lace and tuck patterns with needles out of work, the image may require mirroring horizontally, true on my 930.
My tests with thicker yarn resulted in a flatter knit, and the LC kept having difficulty making proper transfers. Having the width of each set of transfers set at 4 means that if necessary with the specific yarn, the 7 prong tool may be used to move each group of needles in turn.
The results with easy transfers using 2/20 wool at tension 4.2, meriting further consideration for color change placements 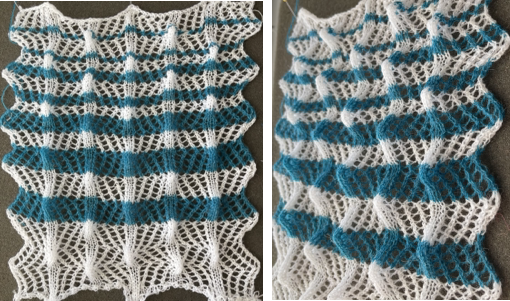 Another attempt, also shown after a light pressing and folding, pleats could be stitched to create other effects,

and then, seeking symmetry, finally realizing each of the above repeats has a missing pair of transfers in the top half, which may account for some of the color placements being “off”. This chart now, now 58 rows in height, appears to contain the correct number of pairs of transfers in each half repeat.

Adding knit rows where transfers reverse directions, here 2 rows are knit in the base color at the end of each segment and prior to changing colors. At or immediately after design rows 28 and 56, the color in use knits for 2 rows. Color 2 follows and in turn knits for two rows, then LC use begins to select and transfer again.

The white yarn is a 2/20 wool, knit at just under tension 5, which was the tightest possible for successful transfers on my machine. The blue is an acrylic of similar thickness, which, if pressing was planned for the scales, is a bad idea since it lacked the tolerance for adequate heat and steam.
The zig-zag effect may be enhanced by adding to the number of transfers in each half in the repeat’s length and on each row in width, but not necessarily in the stitch count in the knit columns. One is then committed to knitting broader test samples.
Extending the experiment to a broader repeat, 32X58 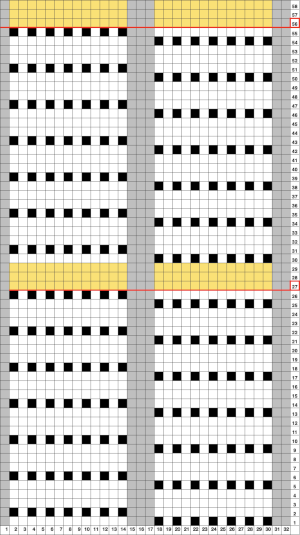 Both yarns used in the samples that follow are 2/20 wool.
Here this swatch is shown as it came off the machine, oriented sideways 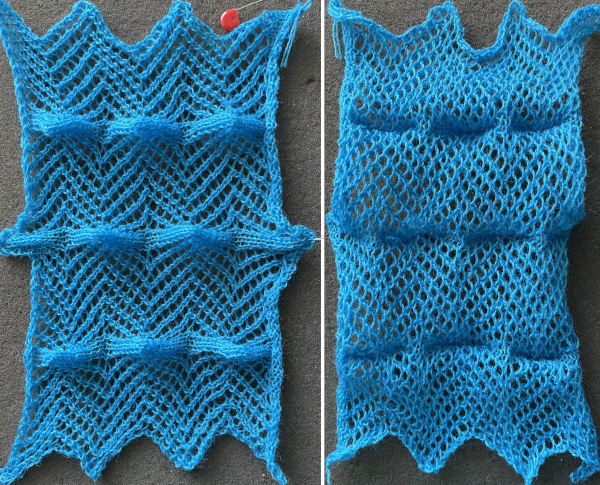 a change in perspective 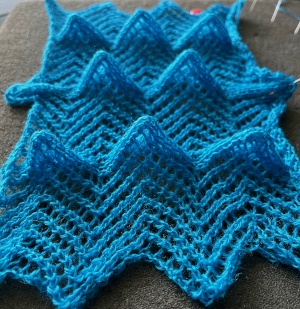 An attempt to shrink the size of the eyelets, this swatch was lightly hand felted. The issue with felting very open knits is having enough control to retain some of the openness in the structure, here the projections became rounder and flatter as well. 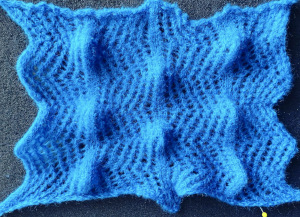 The white yarn is from a new cone and initially needed adjustments in weight and tension in order to transfer properly.  The color changes were made with the extra knit rows after design rows 27 and 56, the result was lightly steamed and pressed.

Bringing the scales closer together, with transfers occurring 5 times in each transfer row, as well as in height

The repeat, now 24X42 is suitable for punchcard machines as well 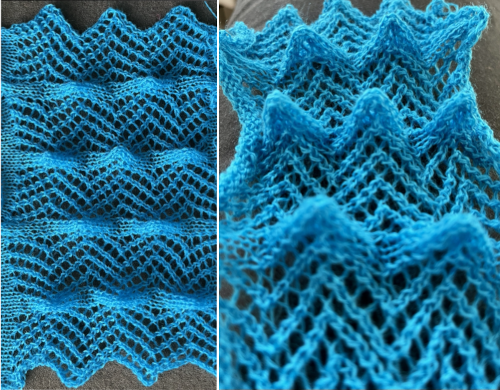 The scales in this fabric are permanent. To my eye, the fabric is best when relaxed. The smallest repeat in the series of my own tests, 16 stitches wide by 42 rows,  is made up of only 3 transfers in each horizontal segment, and 5 transfer sequences before the reversal in direction.

On each side of the needles in work, there are 3 knit stitches, followed by a pair of eyelets, which fold over permanently when steamed lightly creating an edging, while the remaining knit is left undisturbed.

I can imagine the difference in the patterns a fine gauge machine might produce with far smaller eyelets and better definition of the 3D peaks, that said, a few more experiments may lead to developing future ideas to pursue.
If frequent color changes happen in any knit fabric, using a color changer facilitates the process. In the Brother system, color changers sit on the left side of the machine. If lace patterning is to be combined with the use of the single bed changer, the lace carriage will then need to operate to and from the right of the machine.
In order for correct needle selection to occur, when using a punch card machine, the card can be turned over horizontally, marked accordingly on the reverse, and used as-is. In electronic model machines or download software ie Ayab where lace patterns need to be mirrored for transfers to be correct, the repeats may be left and used as drawn for the first row of transfers to happen to the left.
The result of my first test combining chevrons and scales, and sorting out patterning transitions. The fabric is shown relaxed, shortly after its removal from the machine: 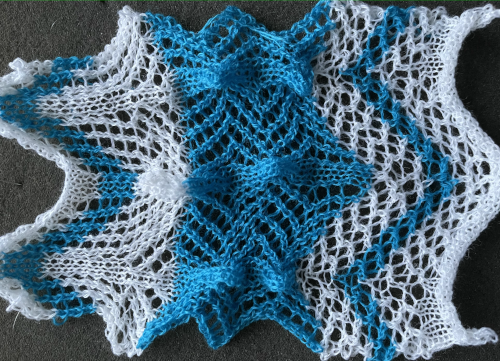 Realizing that in the scale repeat below any reversal of transfers in design works as a coordinating chevron repeat, this swatch was knit at the same tension and using the same yarns as the above, with one more added color.
As can happen in lace knitting, a couple of bad needles and other issues resulted in spots that have visual errors or show inadequate “fixes” and elongated yarn loops. The dark color especially liked to get hung up on gate pegs, a strong argument for regularly feeling the back of the knit.
Some steaming and light pressing was required to reduce the strong curl and make the shapes more visible, losing much of the 3D scale effects, still one can begin to get a sense of the appearance of more frequent color changes in this particular lace design along with the change in the quality of the knit, seen also in the side edges. The variations could be endless, each type of repeat here was programmed separately, but once the desired rotation is worked out, a single long repeat could be programmed instead. 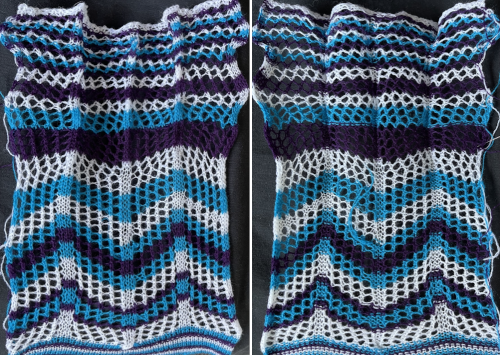 If the changes happen after even numbers of eyelet rows are to be formed, the count in the original repeat can be adjusted to reflect that. Committing to the above repeat, using a spreadsheet, and readjusting the number of eyelet rows in height, there are several choices.
One is to program two separate repeats, each in height required. In this case, the first could be kept continuous after programming, but the second would need to be adjusted in height for more transfer rows and reprogrammed accordingly. Making things work can be a drawn-out and convoluted process at times aside from any experience one has, and lace, in particular, can prove to be a challenge, it helps to take breaks and come back with fresh eyes. 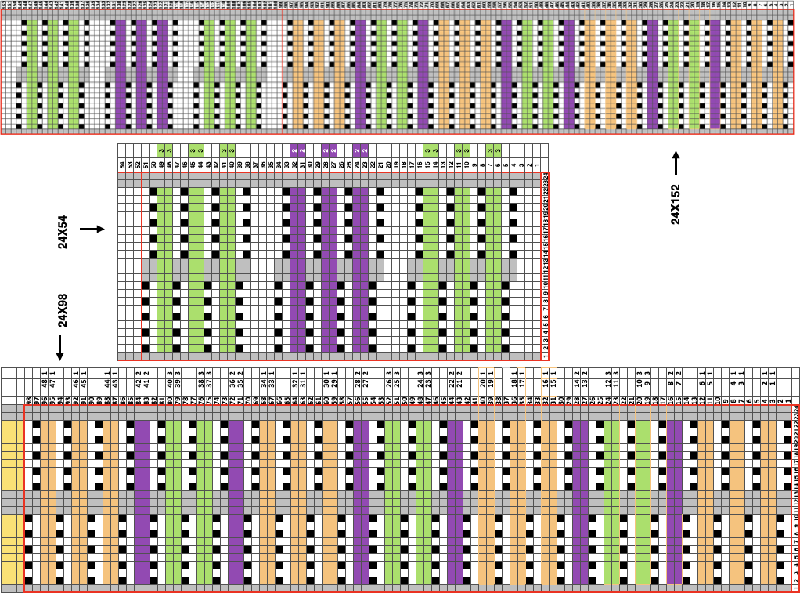 The first and last 3 rows in the 24X54 repeat in practice are not needed. A cheat sheet can be created and is handy and may be reduced in size to provide minimal information if there is no other way to keep track of color placements.
Testing the concepts using the narrower repeat of 16 stitches in width but the same in height, this sample is the result of the first try at the adjusted repeat. The fabric is steamed lightly to avoid too much stretching in width, the goal is to have the first set of scales appear across the row at the location pointed to the cyan arrow 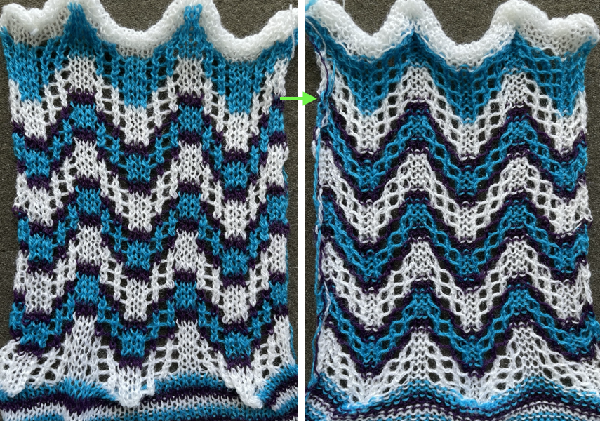 For that to happen, if the last row of chevrons ends with a transfer to the right, then the knitting for the scales should begin with transfers to the left. The reversal is commonly created by having 3 rows rather than 2 between repeat segments. Another in the series, with the intended goal being 3 scales, not 2, and playing with more color variations. 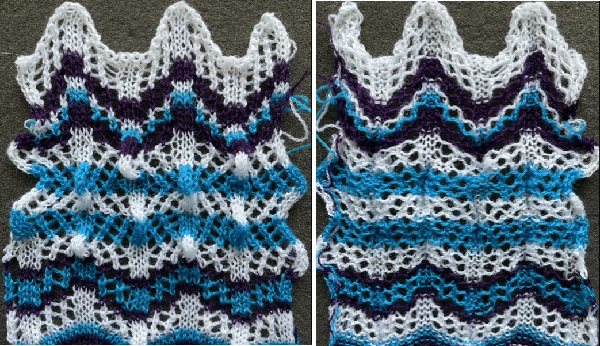 Another look at pattern intersections, seeking another scale 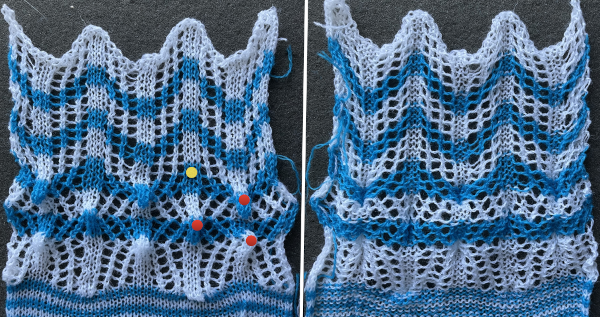 In developing one’s own designs with some practice what information is useful becomes more evident. Sometimes more is less, sometimes it is necessary to really sort out what is going on.
Back to charting: anyone with familiarity with lace knitting punchcard patterns is familiar with the arrows and other markings usually found on the left-hand side. 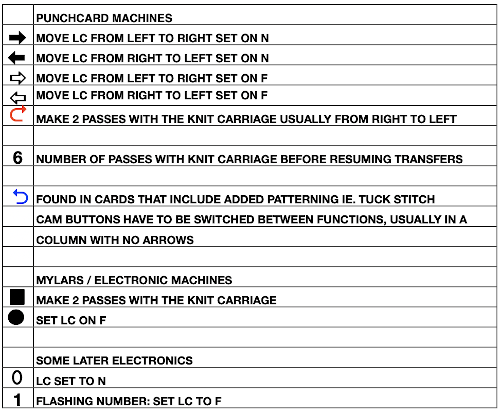 In this fabric, standard transfers are made to the left or to the right. As explained, the chart can be created with typical markings for standard transfer directions, and since the 930, in my case, mirrors repeats vertically, the resulting repeat may be used as drawn to operate the lace carriage from the right. Working in a spreadsheet with added column markings:
A: typical arrows on punchcard repeats, the first row preselects needles moving to the right, and no transfers are made
B: design row numbers
C: the locations for knit rows using the knit carriage, and attempt to visualize locations for color changes. Reset the row counter to 000 before making the first pass with the knit carriage. In the instance, that will take place from left to right and back to the color changer. Colored cells are added as well, reflecting color change locations.
D: the arrows indicate the direction of the transfers, and match those in column A. When transfers are reversed, the stitches will move in the same direction again, forming the projections that create the scales
E: the position of each color in the color changer, blue cells mark areas where extra LC passes occur so as to set up the reversal of the direction of the transfers.

is tiled to include equal borders on each side to 51X84, the chart is rotated counterclockwise. 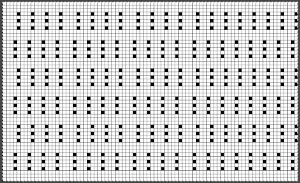 A test changing the color change rotation in the diagram to get a sense of matching variations to the diagrams.

Working in single color once more, the lace carriage now returned to operating from the left, testing the continuous 84-row repeat 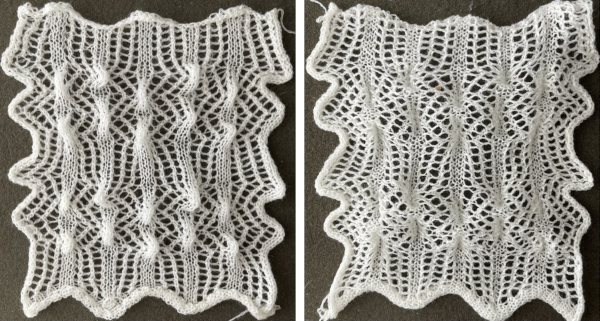 My spreadsheets are created using Numbers, here some of the tables are exported to an Excel document to possibly aid in DIY lace chevrons and scales Excel
Lastly, working multiple repeats in only one color helps assess whether the resulting fabric movement matches the specific design goal 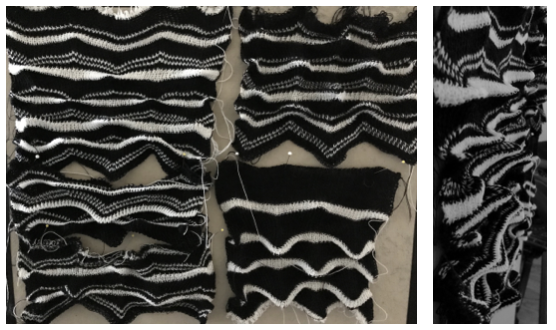 The chosen repeat in turn used in an accessory. 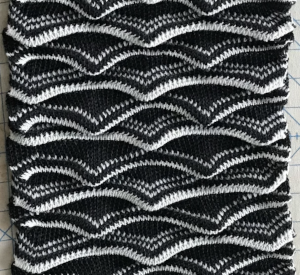 If the striping zagging formations are what appeals and the 3D elevated scales do not matter, a flat version in a mesh lace may be of interest. The repeat is continuous with no reversal of the direction of transfers, and those vertical columns of knit stitches are eliminated. The yarns used in this swatch are cotton and rayon.