Working with 2 carriages when both are selecting needles brings up some interesting issues. Studio machines are able in most instances to select and knit in the same row. Brother preselects needles for the subsequent row, and on that row, while knitting the preselection, once again, the preselection is made for the next pattern row to be knit.

A couple of my earlier posts on the topic: knitting with 2 carriages and a lace round doily which combines lace with slip stitch selection to emulate holding for creating the needed spiral.

Following up on the previous post, now attempting to automate the stitch, some of the logic in needle selection needs to be explored. The chart as drawn below simply addresses functions that may create the desired fabric. It is incorrect in terms of accuracy in actual knitting it 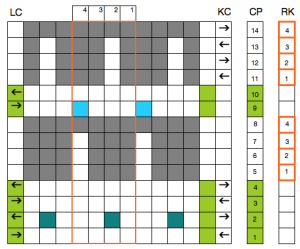 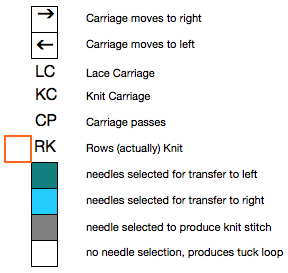 reworking the repeat for use with mylar 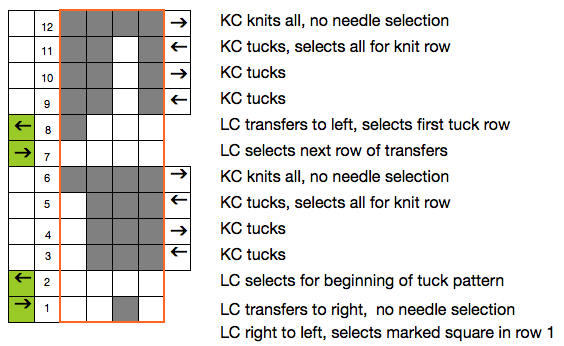 the drawn mylar repeat, numbers reflect placement on my sheet

When both carriages are in use for pattern selection, they will both engage the belt. While either carriage is in use, the alternate one needs to be off the needle bed, or the belt may actually break as one carriage holds it in a fixed position, while the other tugs at it toward the fixed spot from the opposite side of the machine. Lace extension rails are used on both sides. There were variations over the years, including a pair to fit the bulky 260 KM. They are not always exchangeable between models, need to sit properly on the machine for carriages to be stable while stored to the side, and also for moving them off and onto the machine easily.

Pre-punched standard Brother lace cards usually begin with the lace carriage selecting the first pattern row moving from the left side to the right. As with any lace or tuck fabric, knitting begins with waste yarn that is weighted evenly and any edge treatment of choice. On the 910, because of the preselection factor, and to keep the pattern continuous in proper order, the knit carriage is removed from the right side of the machine, and the lace carriage does a preselection row from right to left. That will be its start and return position for the remainder of the fabric. The knit carriage is returned in turn to its home on the right end of the machine, on the extension rail.

Two types of fabric are being created. The goal is to have the edge stitches knitting throughout. To accomplish this, if the LC is in use, eliminate any end needle selection by pushing needles back to B; when the KC is in use, if the end needle is not selected, to get it to knit, it needs to be pushed out to E. The pattern sequence is an easy one when up and running, with 2 passes of the LC, and 4 of the KC, as seen in the charts above.

The knit side is shown below, the arrow locating the larger eyelet points to operator error: I had a stitch caught on a gate peg, and was not aware of the problem for several rows. The extra loop of yarn can actually be seen. Tuck fabrics are often far more interesting on the purl than on the knit side 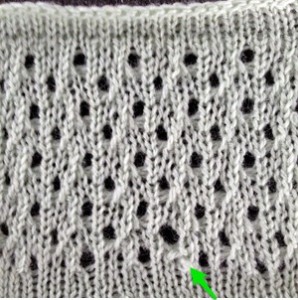 the purl side, with an arrow indicating the same problem spot 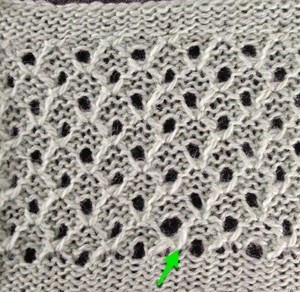 The question that follows is how to program the same design for use with a punchcard machine. Here things get a bit more confusing. The electronic machines advance the program or card a single row for each carriage pass, no matter their direction or sequence. When the punchcard carriage is at rest on either side and the alternate carriage moves toward it, the card does not advance, so the needle selection stays the same, is repeated for a second time. A bit more planning is required and the repeat needs to be shortened to accommodate for this fact.

The chart below shows the amended repeat for punching a card. The first selection row is made with the card locked, and the LC moving from left to right. The card is then released, LC moves to the left, transferring stitches selected from the previous row to the left while selecting those for the first row of tuck. The next row, using the alternate carriage, begins the ongoing sequence 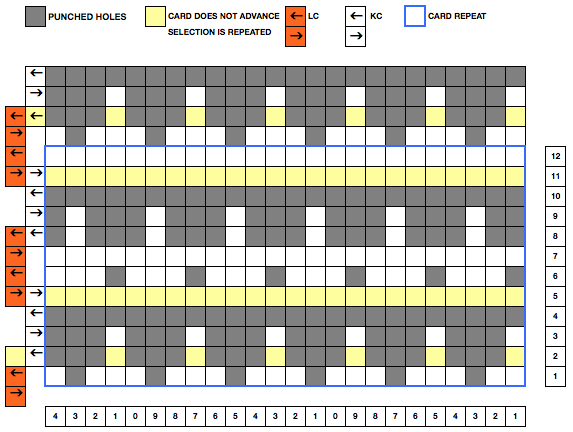 the actions of the carriages with each pass 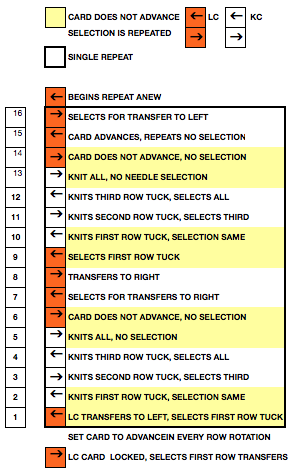 The actual punched holes are shown below. The writing on the card is a ghost from a previous experiment. The red line marks starting row 1 for Brother knitting, blue border outlines a single repeat. A minimum of 3 repeats are needed for continuous reading by the KM 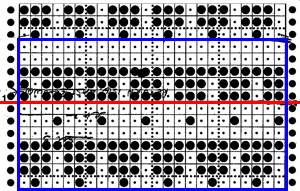 Fabrics with color change every 2 rows such as mazes and mosaics are easily knit on the electronic with 2 carriages. If worked on a punchcard machine, they would have to be executed using a yarn changer and only the knit carriage, unless the design motif is redrawn to factor in the issue discussed above. A previous post, part of a thread on mazes and mosaics, with a punchcard swatch photo.

The first preselection row in any patterning that involves color or carriage changes every 2 rows, is usually done toward the side of the machine that holds either the color changer or the carriage next in use. As seen above, there are exceptions to that “rule” as well.