Elizabeth Zimmermann provided guidelines for circular shawls in her books and publications, including “Knitting Workshop”. For a basic pi shawl (p. 112, Schoolhouse Press, 1984) the assumption is that each section is twice as deep as the previous section and has twice as many stitches. Below CO row represents cast on stitches if the work is to begin from the center out, Column A the row count on which the increases take place, column B the number of rows knit just prior to the increase row (A-1), and C the number of rows available for any planned repeat (A-2), these are constants. The columns directly below each cast on (CO) number (orange) counts represent the number of stitches when increases are complete. The stitch count doubles when the number of rounds has doubled. 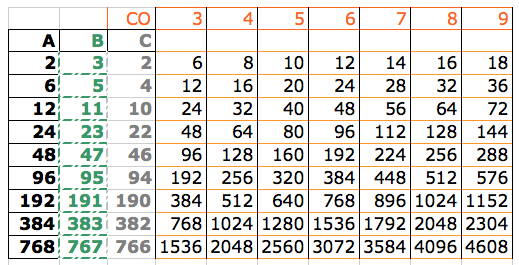 Mary Thomas’s Book of Knitting Patterns, Dover 1972, p.p. 245-247 provides guidelines for circular medallions. She calls her first a “disc” medallion. In executing it the aim is to scatter increases so they are less visible and do not form spokes. Four stitches are cast on, with 4 stitches increased in the total count every other row. The number of stitches between M1s increases by one on every other row. My chart happens to read from left to right. As with any knitting in the round, the process may be reversed, starting at the circumference and moving toward the center. I personally like charts to help visualize results, and have revised her counts in the illustration below so increases are at the same rate but placed a bit differently within the rows. On rows with even numbers between decreases, start row with half that number of knit stitches before the first increase. Because one is knitting in the round, with knit side facing, all rows are knit. If the work were knit on 2 needles, knitting every row would produce a garter stitch. 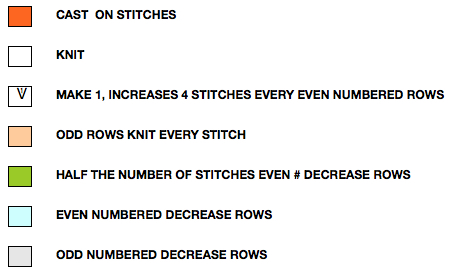 what happens if increases “line up”

For her circular “radiant” medallion after the first 2 rows increases are made every 4th round. My chart is renumbered excluding the first 2 rows, so the increase rounds would occur on numbers divisible by 4, making it easier for tracking them. Each “building” round increases the number of stitches by 16.

In her “target” circular medallion, the building increases are arranged in concentric circles. Each increase row begins with a M1. Once RC 20 is reached, a stitch is added between increases on each increase round. This chart reflects the knitting progress, but not the shape. STS column on right reflects the total number of stitches after increases have been made. Each building round after RC 6 increases the count by 32. Formulas for more, varied geometry-based medallions are also offered in the book.  I finally “discovered” actually using formulas in Excel! The video that clearly and quickly helped me learn how to: https://www.youtube.com/watch?v=QFVkSnGgZZc 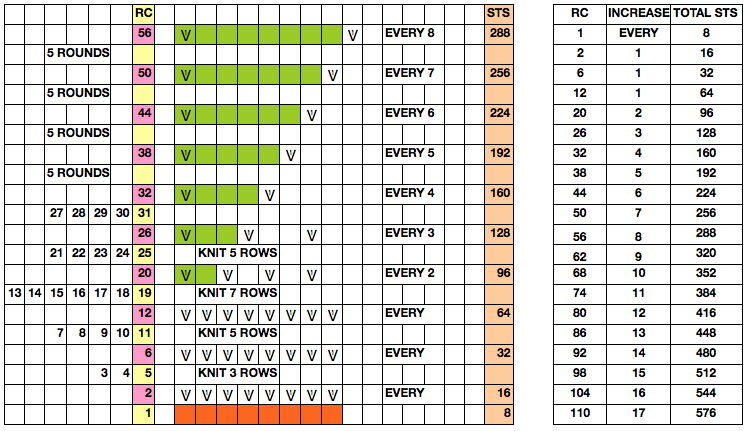 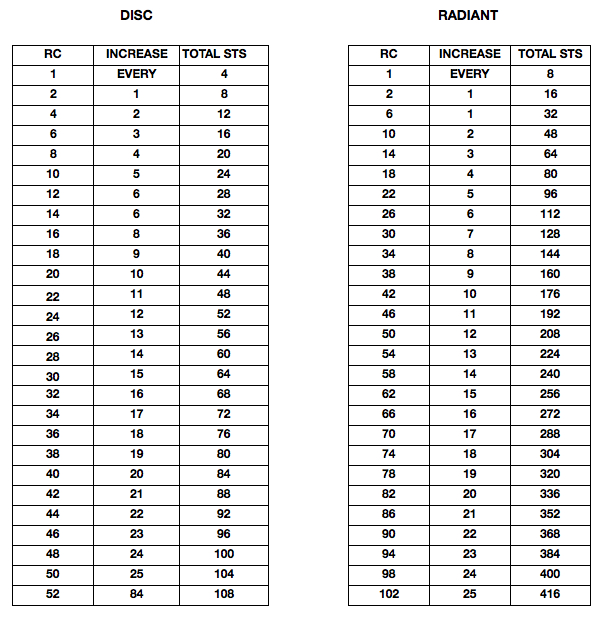 These formulas do not take into account changes in gauge or stitch type within bands. For similar shapes to be achieved in machine knitting, the number of transfers would be prohibitive. In order to achieve similar shapes, one begins with the radius of the finished circle and the shapes in the family may be knit sideways, using holding.

Hand knitters can work with 4 double-pointed needles, one or 2 (or more) circular needles, and crocheters can follow similar shaping methods. The advantage to long circulars is less bunching up as the work grows, and if you like working flat or want to try the garment on while shaping it, you can use more than one long needle, making the piece or the try on manageable. Working from the top down when knitting such shapes may give one more control over the size of the finished piece i.e. on length of body and sleeves, height between bands, extending a yoke into a shoulderette or cape. Stitch pattern size and repeats add to the math calculations. Garter stitch is the only hand knit stitch that approaches a square gauge, could be used in combination with patterned bands.

The charted patterns above rely on M1 to increases. Yarn overs may be used for decorative holes at increase points. If preferred, the hole may be diminished by twisting the stitch when picking it up on the next round.

When knitting in stripes, the “jog” at the color change in knitting can be eliminated by slipping the old color purl-wise and starting to knit the second stitch. TECHknitting provides more alternatives in her posts: http://techknitting.blogspot.com/2007/01/jogless-stripes.html
http://techknitting.blogspot.com/2011/03/jogless-stripes-pretty-picture-version.html. For a method using yarn ends and a needle when the yarn is cut http://imgur.com/a/NREsH.

For shawl shapes and their geometry using YO increases, see the posts and publications by Holly Chayes.

To start it all from the center out: I am used to doing the magic loop cast on with a crochet hook, and then moving on from there, Kitty Falol shows it worked with DPNs.