I  have gotten used to seeing charts for crochet in the round, and prefer charts to written instructions in knitting as well. My hand knitting has usually been project-oriented in terms of experimentation or exploration. Reviewing the information provided by both Zimmermann and Thomas in their early publications has led me to new appreciation and admiration for their efforts and for the knowledge made available to their readers, and not just in their time.

Looking at the additional medallions by Mary Thomas, I thought I would play with attempting to illustrate them, some in rounds rather than individual wedges lining up flat with blank or grayed out squares between them. The first example is my imagined square medallion (straight, geometric), p. 239 in my Dover edition 1972, and created in Excel. The work is begun on 8 stitches, divided evenly among 4 needles, knitting with a fifth. The cast-on is equal to double the number of sides of the square geometric shape, 4. A hexagon would begin with 12 (6X2), an octagon with 16 (8X2). In this instance, the increases are arranged at the beginning and end of stitches on every needle.  When compiling information on machine knitting, I generally swatch to proof ideas. I am not planning on making accompanying samples or swatches for these.

I knit primarily on the machine and prefer hand knitting on long straight needles as opposed to rounds, so I find myself often referring to counts as rows rather than rounds. For square medallions cast on 8 stitches, divided into 4 needles, knitting with a fifth. In all patterns after the cast-on row is divided, the first round is knit in the back of all stitches to flatten them. Stitch counts after increases sorted high to low is helpful when knitting from the outside edge in, and in that instance they become decreases. For the square medallions, they are shown in that order, with counts for many more rounds than those in the illustrations. Beginning with the pentagon, they reflect stitch counts from the start of each segment shown. 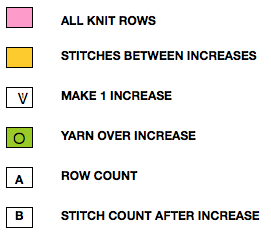 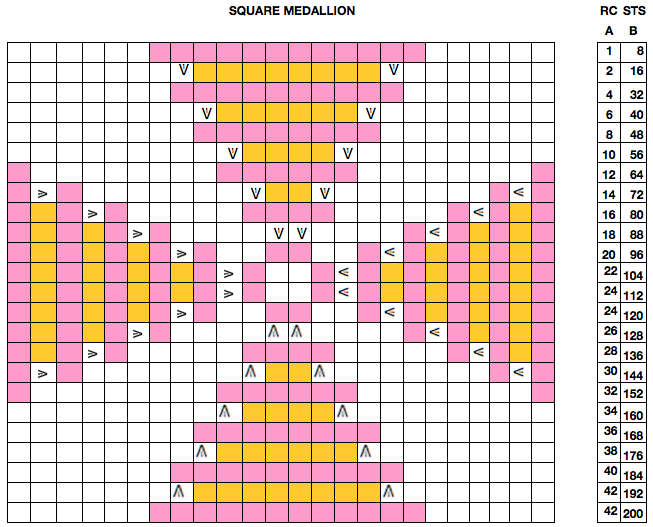 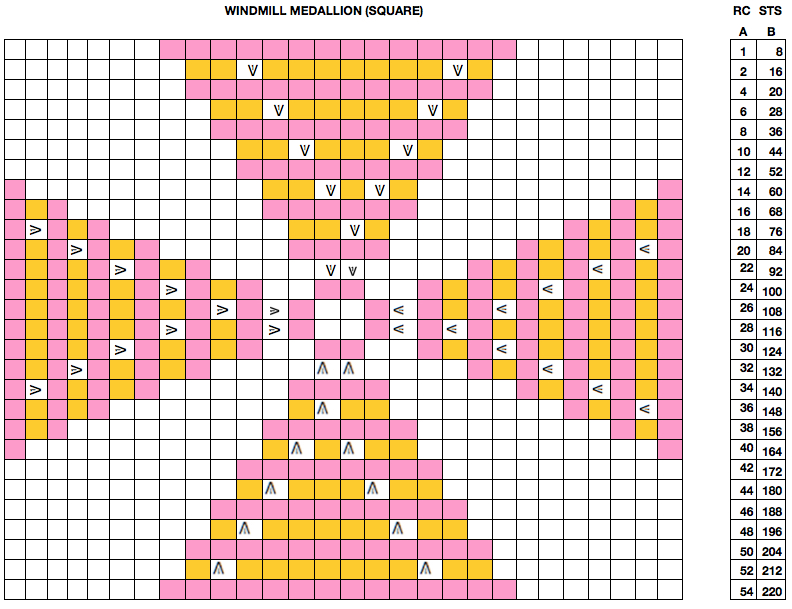 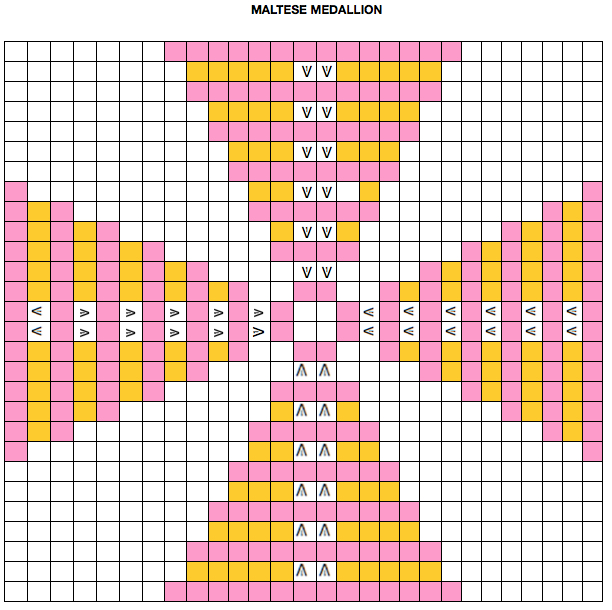 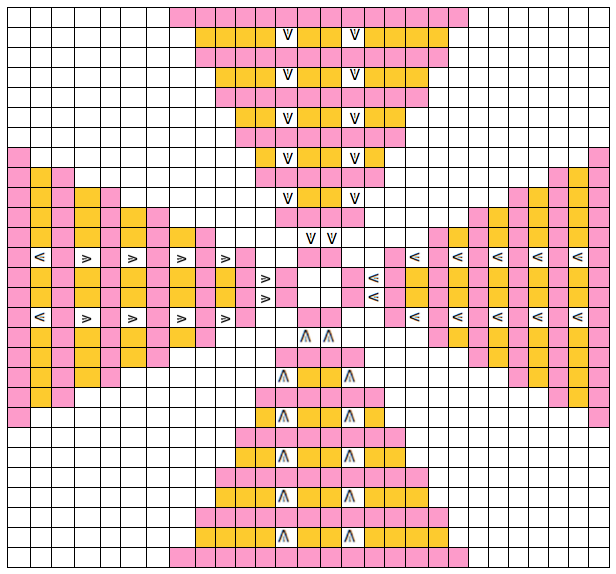 In a square medallion (bias, swirl, pp. 241-242) increases are placed on only one side, at the beginning of each wedge. Yarn overs are used to create eyelets for more ease when attempting to keep the square flat, and the increase round is to be repeated: “as required”. If double yarn overs are used, drop the second yarn over on the next round. They are made before the stitch. Single increases are to be made each round. Here are the wedge shapes side by side 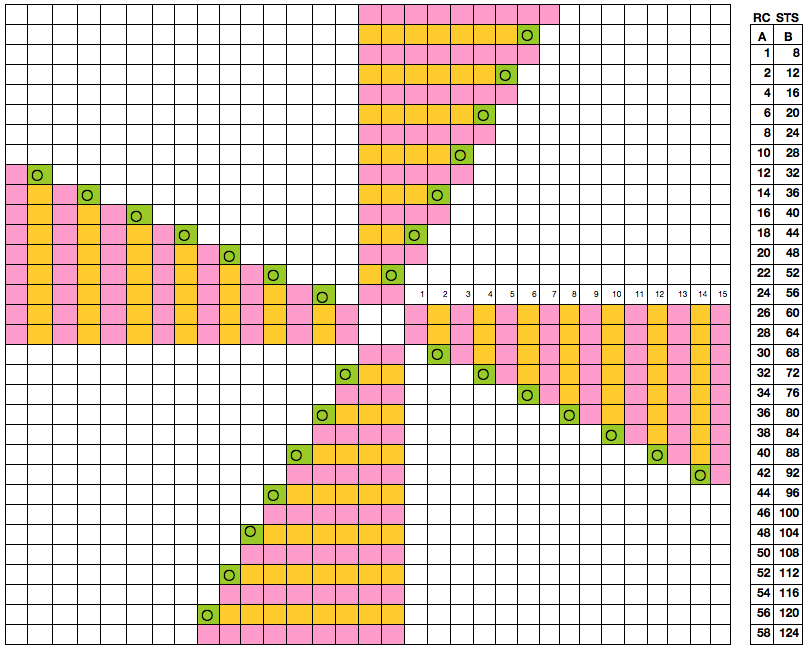 For a pentagonal medallion (pp. 242-43) cast on 10 stitches divided evenly, or as the number of segments increase, work 2 sections or more on any one needle. For the swirl double yarn overs may be needed to keep the work flat. Thinner yarns may require additional knit rows between increases. Stitch counts 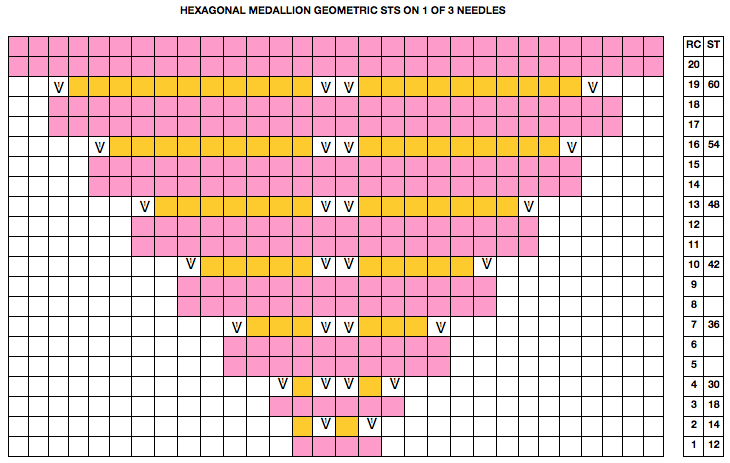 The hexagonal medallion swirl (p. 243) is shown using both M1 and YO increases. Here the rate of increase in rounds is slower than above (2 per needle as opposed to 4), so increase rounds are separated by only one row of  knit stitches 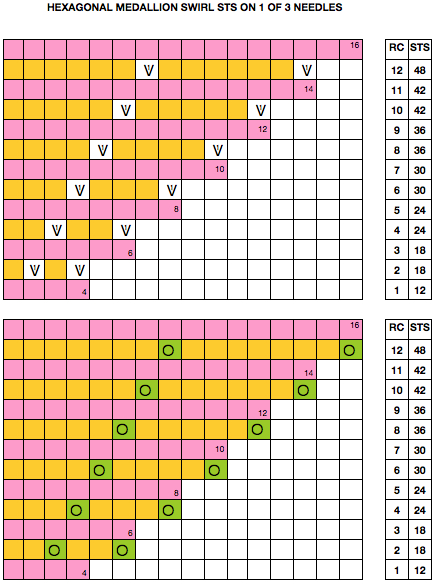 The octagonal medallions (pp.244-245) are cast on 16 stitches, divided into 4 needles, and knit with a fifth. To make a smaller center hole, 8 stitches may be cast on, doubled on the next round, and then divided. The first geometric medallion shows increases (4 per segment, 16 per round) in single rounds, requiring several knitting rounds between the increases. The second medallion uses more frequently (2 per segment, 8 per round), so single all knit rows separate rounds 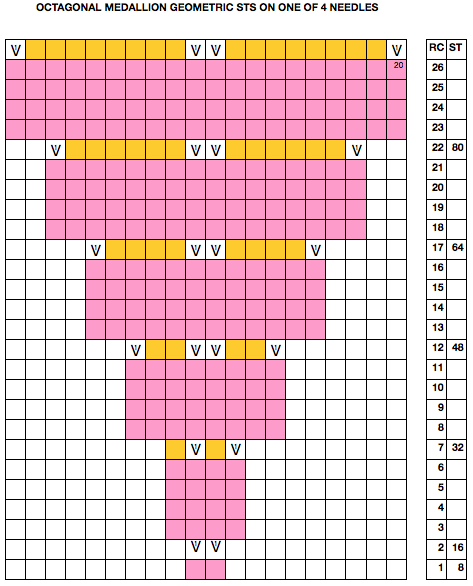 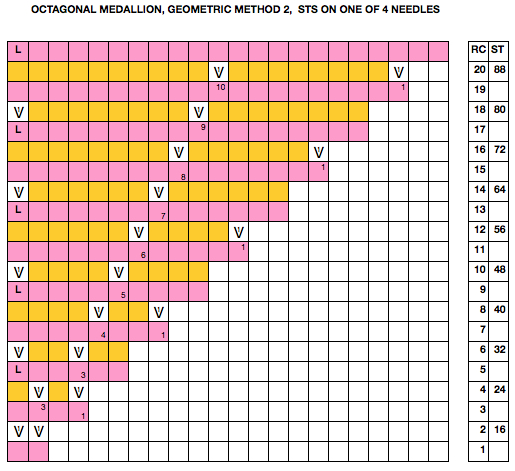 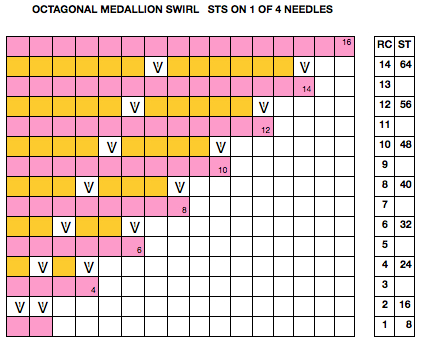 If the perimeter or circumference of the shape to be knit are known, the process may be reversed from the edge in, with decreases replacing increases. The advantage of working from the center out is that adjustments i.e. extra knit rows between increases, changing increases to yarn over(s) for added ease or decoration, etc. may be made far more easily as the work grows. Considerations should be given to leans of M1 stitches so they point in opposite directions on alternating sides. Motif and pattern placement can only be planned after these building units have been sorted out.