I am including notes on my working through the process and some of my stumbles at the start of this post. More specific how-tos are found toward the bottom of it.

Such fabrics may be created with both the KRC built-in function or with the color separations that knit each color for each design row for 2 consecutive, identical rows. Punchcard knitters are not excluded. The starting side is on the left for the KRC setting (B in this illustration), on the right side for the alternate color separation (C, double length, or drawn with each row repeating X 2). 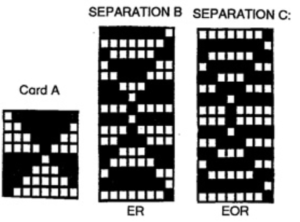 I am still testing my 930, for my samples I began by using the built-in pattern #16 in the Stitchworld Pattern Book I.

In the absence of a jac40, the fabrics are knit by manually selecting stitches to the upper working position (E on Brother) on the ribber bed every row. Preselection for the next row to be knit on the main bed makes the process far easier.

In my first sample, the colors are the same on each face. Since the same number of needles are selected for both design and ground, both sides of the fabric will be exactly alike. There will be floats, enclosed by knit stitches of the opposite color. Beds are set at half-pitch. Consistency makes any process easier and more predictable. My ribber set up was also with an extra needle on the ribber at either end of those in work on the main bed. I found I had less issue with the long floats in my design when I made certain the needle selection began with needles to the left of those in work on the opposite bed rather than to the right, allowing for the color in use to knit first on the ribber, then in turn on the main bed. It may not matter with patterns with shorter spans worked between the 2 colors. The dropped stitch issues below were resolved by using different yarns, no other changes. 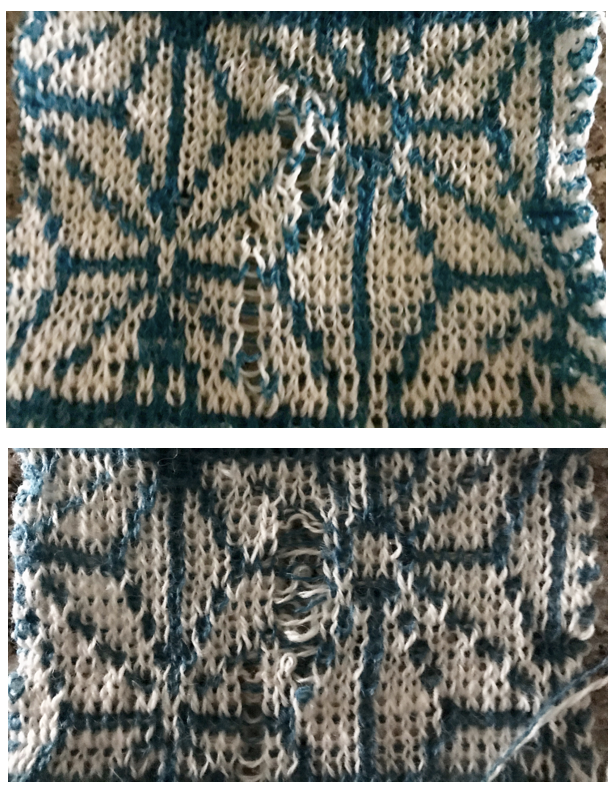 The needle set up in colored squares and on my needle beds showing matching selections on both beds (different design rows). Some of the floats may be seen created by the blue yarn in the bottom photo. If the first and last needle on each side were not selected on the main bed, the needles at each end on the ribber were added to hand selections for the next row (blue squares) 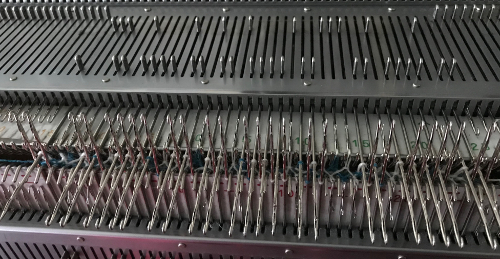 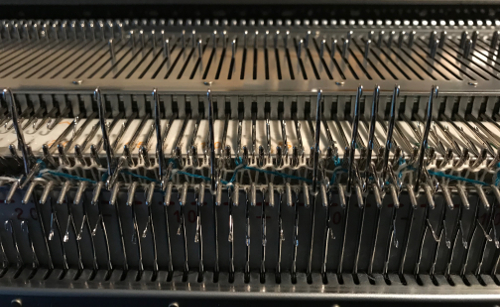 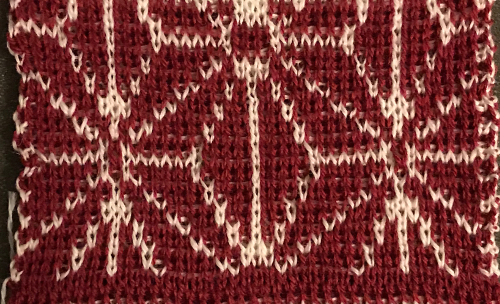 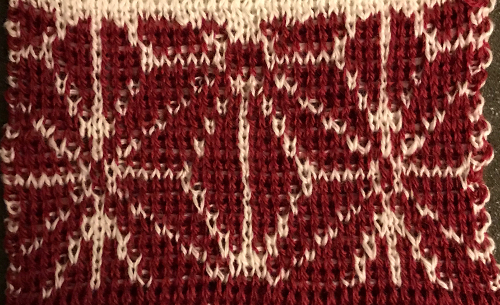 For DBJ that reverses ground and pattern colors, opposite needles are selected on each bed. Color 1 knits the design on one bed and the background on the other at the same time, while color 2 knits the reverse. There are no floats. I knit this fabric as well at half-pitch. The ground color created pockets (white squares), with the pattern color (black squares) locking the layers of fabric together. Here again, first and last needles on the ribber were worked on each row. I began pushing needles up on the ribber beginning to the right of each needle in work on the main bed. Needle selection on ribber matches unselected needles on the main bed (pink). All needle positions in each bed are mirrored. 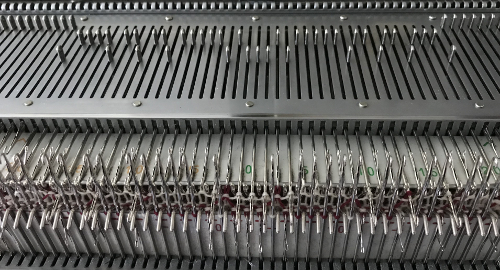 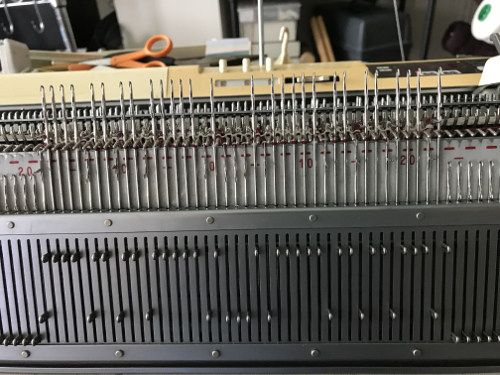 Since ribber fabrics are not visible for a large number of rows, I frequently scrap off after short distances to proof technique before committing to longer pieces as well as to assess whether the effort is worth it in order to produce the fabric in that particular technique or yarn. 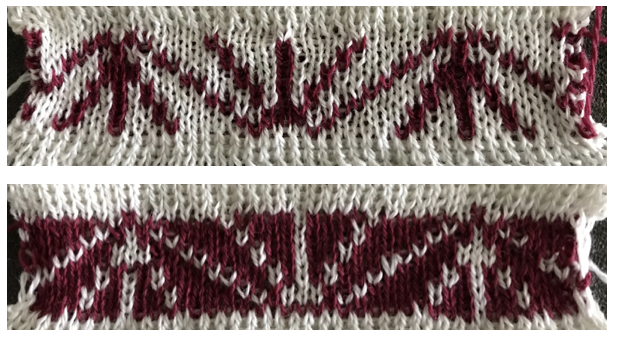 Moving on to a self-drawn pattern, the technique proved to be sound. On inspection, however, I saw I was actually missing a pixel in the .bmp I downloaded, and on the reverse, the green arrow is most likely operator error in needle selection. The orange dots highlight the missing pixel/contrast color stitch, and on the color changer side, I had a really sloppy edge that needs sorting out (red dots). A possible added factor: I knit the motif using KCI, and later recalled end needle selection does not always work with the carriage I am using.

Here I filled in the missing pixel, and drew a single-pixel black line along each side, testing a “border”. The first and last needles on each side were now cast on and in work on the main bed.

That single stitch solid color line does not add to the design in my opinion, so back to the drawing board: side “border” pixels are eliminated. The first and last stitch are now in work on the ribber. This fabric is the best by far, at the very start I forgot to cancel end needle selection (KCI), then switched to canceling it, KCII on electronic.

The how-to in summary: first and last needle are on the ribber.

On the electronic choose KRC for the built-in color separation for the fabric to be worked in DBJ. KCII (no end needle selection). With a free pass to the right, both carriages set to slip <– –>, select for the first row of knitting to be worked in color represented by white squares in the design chart. Both carriages remain set to slip in both directions throughout. On the ribber bed, bring up to E/hold position first needle on the right of any needle selected on the top bed, then continue to push needles up into work to match the number of not selected needles on the knit bed. As needles are arranged, there will be a space between the last hand selected needle on the ribber, and the next needle in work on the main bed 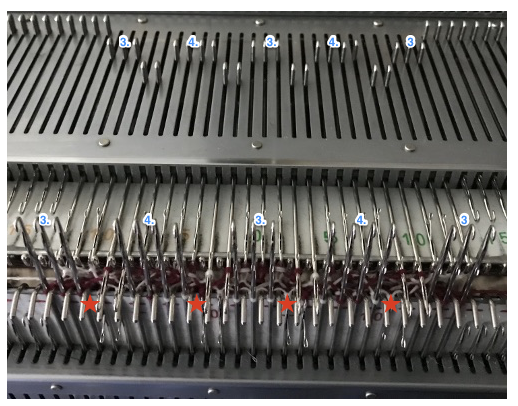 Now that there is that extra needle in work on the ribber on the color changer side, to match selection as seen above, needles are hand-selected to E beginning on the far left, still keeping that space just before the next needle selected by the pattern reader. Remaining selections began to right of needles on the main bed as described above.

when selection begins on the main bed on the left

Getting back to working the same pattern on both sides of the knit:  the first needle on the left is on the ribber, the one on the far right on the main bed. On the electronic select KRC for the fabric to be worked in DBJ. KCII. With a free pass to the right, both carriages set to slip <– –>, select for the first row of knitting to be worked in color represented by white squares in the design chart. Both carriages remain set to slip in both directions throughout. On the ribber bed, bring up to E/hold position first needle on the left of any needle selected on the top bed, then continue to push needles up into work to match the number of selected needles on the knit bed. 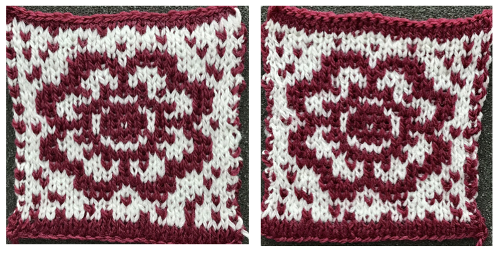 Small selection errors are seen on the left image, ie on the second row on its right, may be easily repaired by duplicate stitching. The stitching yarn may be fed easily through layers of double knit for short distances before and after the “mistake”. With all settings and yarn being equal, there is a difference in size between this fabric (larger of the 2) and the one with color reverse on its other side 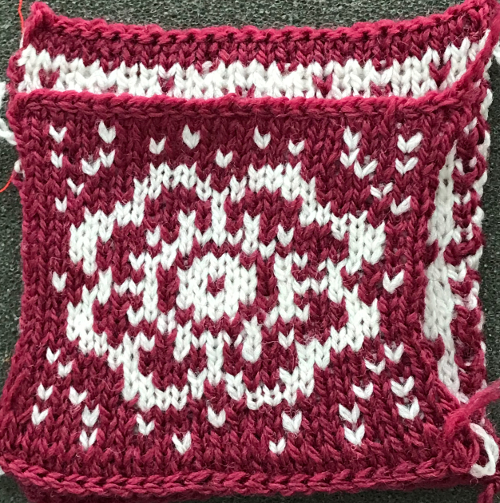 A similar setup, working in full pitch. Here needles line up directly below each other. If the wrong needle is selected it will be point to point with the needle immediately above it and is an added clue the wrong needle is being pushed up into hold/ E position. My first swatch had a distinctly different side / vertical edges. Cast on was for every needle, half-pitch (top image), the first needle on left on the main bed, last needle on right on the ribber. When completed, it was followed by a change to full-pitch prior to pattern knitting, lining up needles point to point, directly below each other (bottom image).

I prefer the edge obtained on the half-pitch throughout, seen in the previous  sample

Still, pondering those edges, and what about repeats with large areas of a solid color? The image on the left is 25X26 rows in height, the one on the right adjusted for an even number of solid color rows, and a total row repeat divisible by 4, 25X28. The single black line at the top is a marker for returning the carriage to all knit when the top of the repeat is reached. When using full pitch, solid areas remained open at both edges with carriage set to KCII. A wooden tool handle is actually inserted through from one side to the other at the bottom of the swatch. Because the needles are point to point, no extra needles could be brought to work on both ends as a workaround. KCI will select end needles on the main bed. I tried that as the first workaround to seal the edges. I paid no attention to whether needles were selected at each end every row, and got another creative pair of edges. 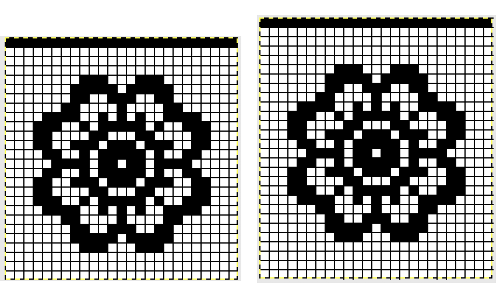 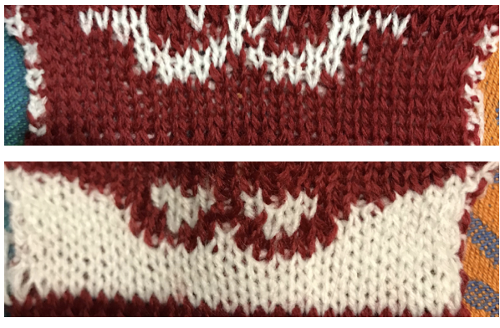 Analyzing the fabric structure in those areas of solid colors on alternating beds: at first full pitch makes sense if one has knit tubular stripes or solids which have closed edges, with the yarn making a single pass on each bed, traveling back to the color changer, with the option to stripe every X, even number of rows. Such stripes occur evenly spaced and identical on both fabric sides. Here the goal is to knit the fabric with large blocks of solid, alternate colors on each side. The main bed knits color 1 on selected needles on the top bed only, the alternate color is knit with the ribber needles being hand-selected up to E while the main bed is slipping, with none of its needles selected. Other than that first set up row with preselection from the left, 2 rows are knit in color A, followed by 2 rows in color B. There are no stitches traveling between the beds to seal the fabric together in those areas, creating open sides, so if the goal is to have the edges seal. other steps need to be taken. A single-pixel solid line along either edge of the repeat did not create a good edge. Full pitch is easier than half pitch to manage. One possible solution to both issues is to alter the side edges of the design repeat so there will be alternating needle selection along those side edges, thus sealing the fabric. 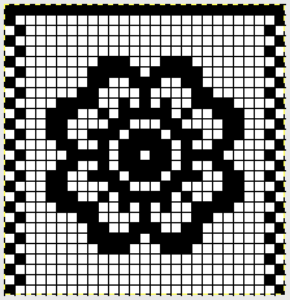 I decided to cast on with white and to continue with white as the first color used in the pattern (white squares in the chart). This swatch was knit in full pitch. Edges are sealed throughout. The only hitch was when the top was reached and that all black squares row was reached. I was on the right at that point, with my dark color in the feeder. The row toward the left would have knit in the dark color instead of the white on the top bed. I cut the dark yarn, made a free pass to the left, continued in plain knit in white to right, and then transferred stitches and bound off. Top and bottom edges /borders in terms of the number of rows, whether to add pattern there as well, are all subject to personal preferences and taste. 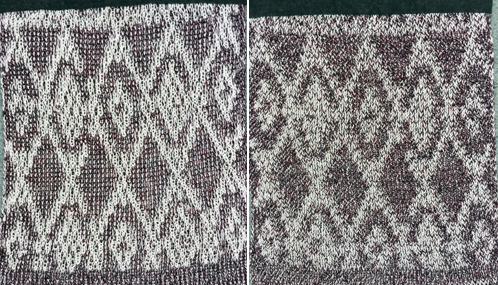