At the start of 2018, I wrote a long post on creating drop stitch lace using ayab software and some of the techniques required to produce the fabric. Since then the software has been updated including several new features and among them the heart of pluto HoP color separation for executing multiple colors per row dbj, and revisited the topic providing links to all the previous related posts.  It occurred to me I might be able to use it to make drop stitch lace without having to manually perform the color separation and then entering it as a single bed pattern. This was my first proof of concept effort, dropping each of the 2 colors in turn. 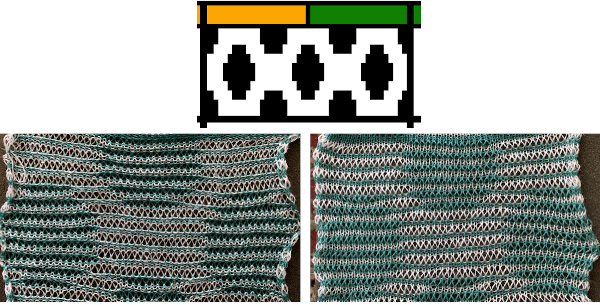 Making things work: my first desired repeat was what I expected would produce a circular shape, it measured 33 stitches by 23 rows.

Increments in height need to happen at sequences of 2 rows each, so the design was then doubled in height, resulting in a scaled image now 33 stitches by 46 rows in height, with a planned horizontal repeat X2 = 66. Note: the sidebar offers start and end needles are given for pattern placement on the needle bed. Sampling may occur on fewer stitches than that. Since the number of repeats programmed to add up to an even number and center alignment is chosen, the number of needles is even on each side of 0.

In my second series of swatches, I decided to try for a smaller “circular” shape, with the repeat now measuring 15 wide by 20 high, and a planned horizontal repeat X3 = 45. If centered, the software places the odd number of needles on the right-hand side of 0.

As with any pattern using Ayab, the starting side is with COL. The critical difference is that all needles are in work on the ribber, all needles on the main bed start in work but empty. White squares select first. The main bed is set to slip both ways throughout, the ribber for this fabric is set to knit every needle, every row. The choice then needs to be made as to whether both colors or only one is to be dropped. The software does the work involved in the separation, but the knitter needs to manually cancel needle preselection on the main bed on a regular basis as well as drop stitches formed there. This is best achieved by using a ribber cast on comb or a similar tool. A modified stitch dropping tool does not work unless all needles in work are in B position, so if they are pushed back it will work here as well but I found the cast on comb made the process faster. I will refer to colors as black and white, as they would appear in the design in black and white pixels. Begin with base rows in white. Whether dropping one or both colors, the first preselected row is disregarded on the main bed in both fabrics.
Begin COL: main bed set to slip <– –> (remains there throughout). As the carriage moves to the right, the first row of white pixels is preselected, the ribber only knits.
COR: for both fabrics, use the chosen tool to push preselected needles back to the B position. As you move to the left side and the color changer, the needles for the first row of stitches to be dropped in the next color (black pixels) will be preselected
For dropping both colors
*COL: pick up the color to be used for black squares, loops will be formed on the main bed as you knit one row to the right
COR: push all needles forward so stitches on the main bed move behind the latches, I tend to do so all the way to E. As needles are returned to the B position the loops formed on the previous pass will drop, creating long stitches on the ribber bed. As you return to the left nothing happens on the main bed (needles in B position are not worked in slip stitch), but the next row of white pixels will preselect
COL: pick up the color to be used for white squares, loops will be picked up on the main bed as you knit one row to the right
COR: push all needles forward to drop stitches on the main be, push all needles back to B, knit one row to the left side, as you do so next row of black pixels will preselect**
COL: repeat * to**
I knit until the green yarn broke for some unknown reason

For dropping only one color of the two, I chose color 2, “black squares” after preselection starting row
COL: main bed set to slip <– –>. As the carriage moves to the right, the first row of white pixels is preselected, the ribber only knits.
COR: use the chosen tool to push preselected needles back to the B position. As you move to the left side and the color changer, the needles for the first row of stitches to be dropped in the next color (black pixels) will be preselected
*COL: pick up the color to be used for black pixels, loops will be picked up on the main bed as you knit one row to the right
COR: push all needles forward to drop stitches on the main bed, and then push all needles back to B. Knit one row to the left side, as you do so next row of black pixels will preselect
COL: now working with “white”. No loops are wanted on the main bed, so the last preselected row of needles needs to be pushed back to B before returning to the right, knit one row
COR: cancel needle selection again, as you return to left the next row of black squares will preselect**
COL: change colors, repeating * to ** 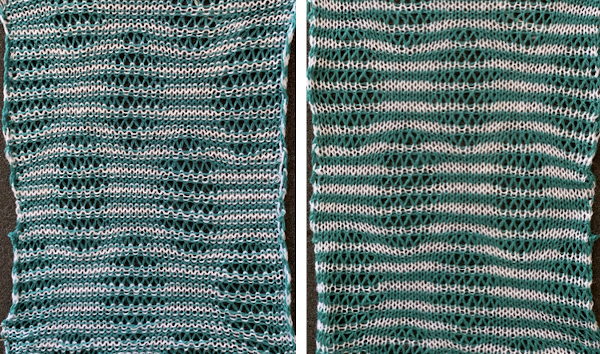 End with some rows on the ribber in “white” to match the number used at the start of the piece.
Casting on and binding off both need to be loose since the fabric stretches considerably when off the machine.  I like to start in waste yarn, make certain my colors change properly, pull down a long yarn end, and begin the final piece on open stitches. At the top, I bind off on the main bed, either transferring stitches up to the main bed from the ribber or taking them off on waste and rehanging them there. A latch tool bind off may then be done around two gate pegs or even more to provide stretch at the top. The bottom of the piece can then be rehung and the same bind off can be executed so the top and bottom edges will match in stretch and width.

Sometimes things are not necessarily worth doing because you can. I was curious as to whether an all one color drop stitch could also be executed using this separation. It is but involves pushing needles back to B multiple times in each sequence. I started with a shape, scaled it twice as long, erased every other row, tiled it X3 horizontally, 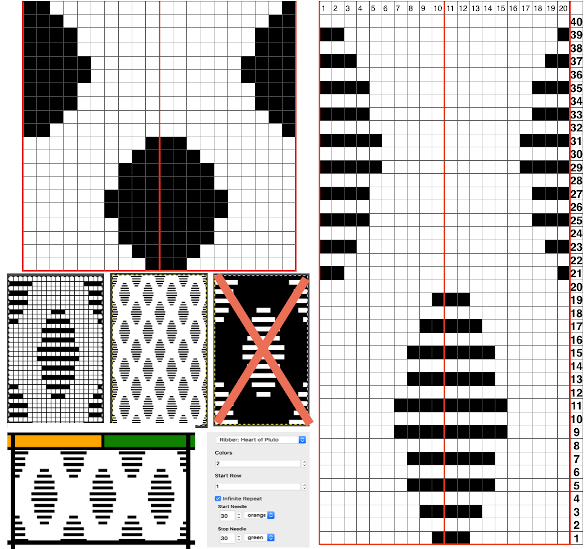 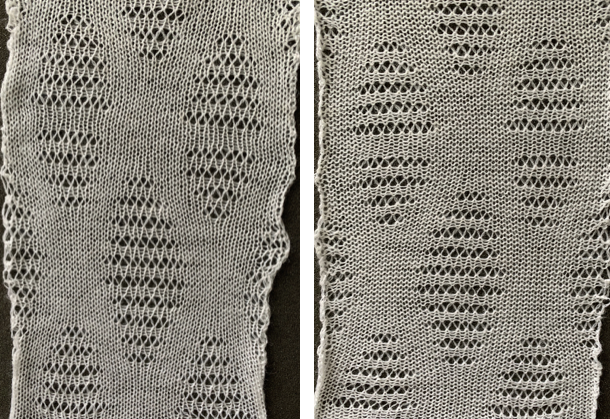 The wider horizontal band of all knit stitches was due to operator error, happened when I pushed back preselection an extra time, resulting in the ribber only knitting extra rows. For the sake of added clarity, I have added color to the chart below, assigning yellow and grey to all-white design areas in the pattern. The black squares are what I choose to drop. For illustration purposes, this is only a segment of the repeat. 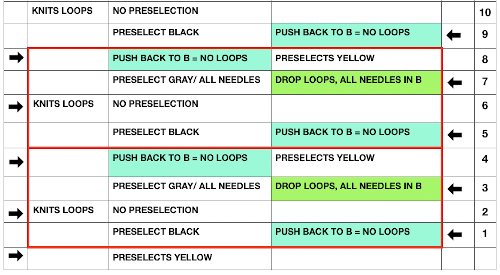 The process: begin with COL: main bed set to slip <– –>. As the carriage moves to the right, the first row of white squares/ pixels (yellow) is preselected, the ribber only knits.
*COR: cancel any needle preselection for white (yellow) squares, all needles are pushed back to B

as the carriages move to the left, the black squares will preselect

COL: knit to the right in order to form loops on the main bed,  they will be dropped to form long stitches
COR: loops have been formed

drop the loops, return needles to B position. At this point, since all needles are in B a modified stitch ditcher may be used for 2 passes, dropping the loops on the first pass and returning the whole series back to B on the second.

As you move back to the left, all the needles will be preselected for the all-white row (grey squares),

COL: push all preselected needles back to B, as you knit back to the right the next group of white squares (yellow) in the next design row will be preselected

*COR: push selected needles back to B as you move toward the left the next row of black squares will be preselected selected

COL: knit to the right in order to form loops on the main bed, continue for the desired number of repeats and end as suggested for the two-color version.

Previously knit, not using this method, a sample with the ground behind the shape dropping stitches and one in 2-color with shapeshifts 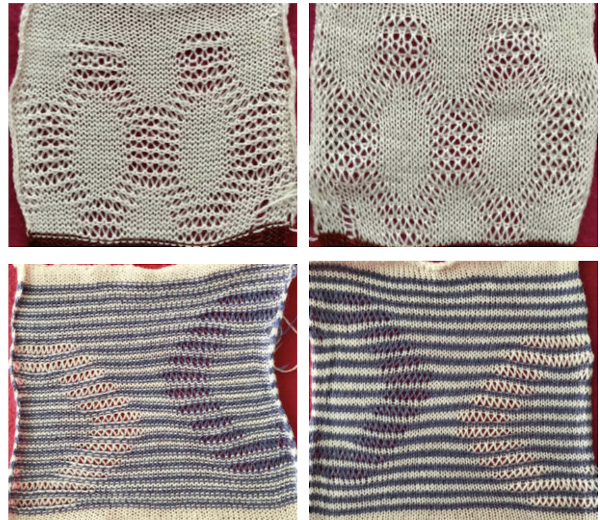 For a while, Camino bubbles were a popular topic and created with dropped stitches, for the series on the topic search