WORK IN PROGRESS
I am recently pondering self-folding shapes, which begin with pleating. Presently, in fashion and knitwear, skirts and clothing with ruffled or folded fabric variations abound. In 2013 I wrote a post including downloadable files of one of my early handouts and working notes. This is the same information.  Correction: folds to purl side should read 2-4  rows of tuck 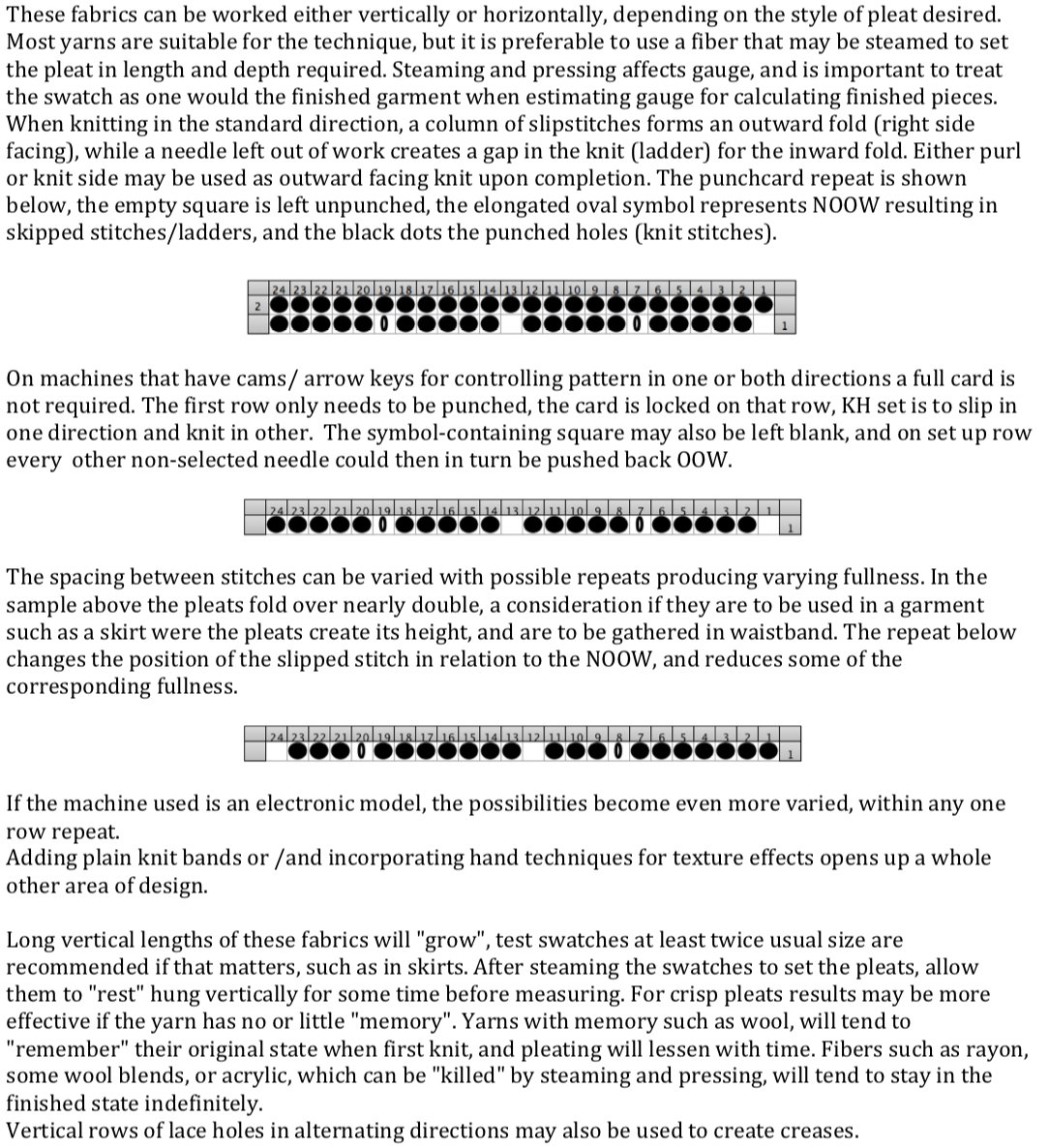 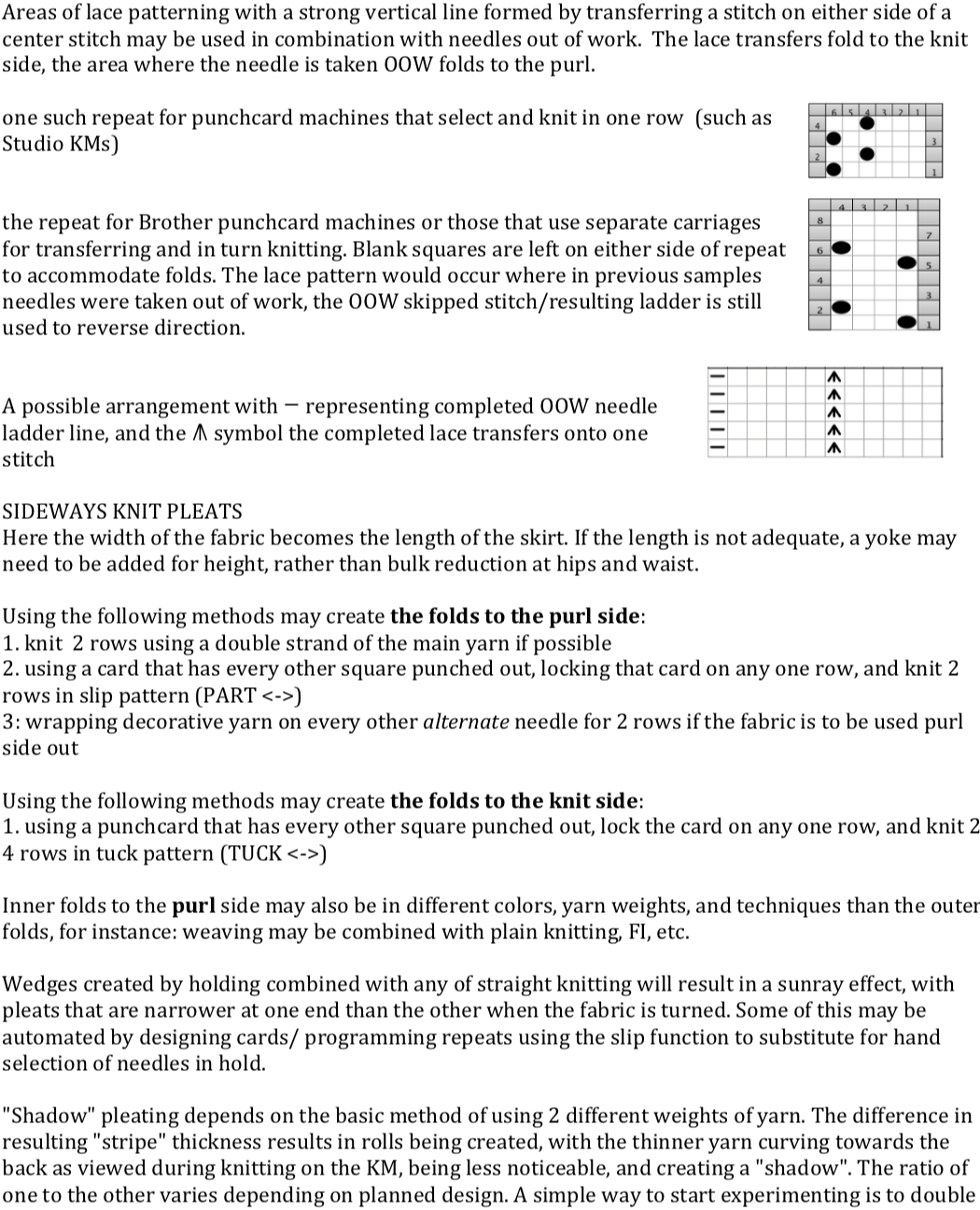 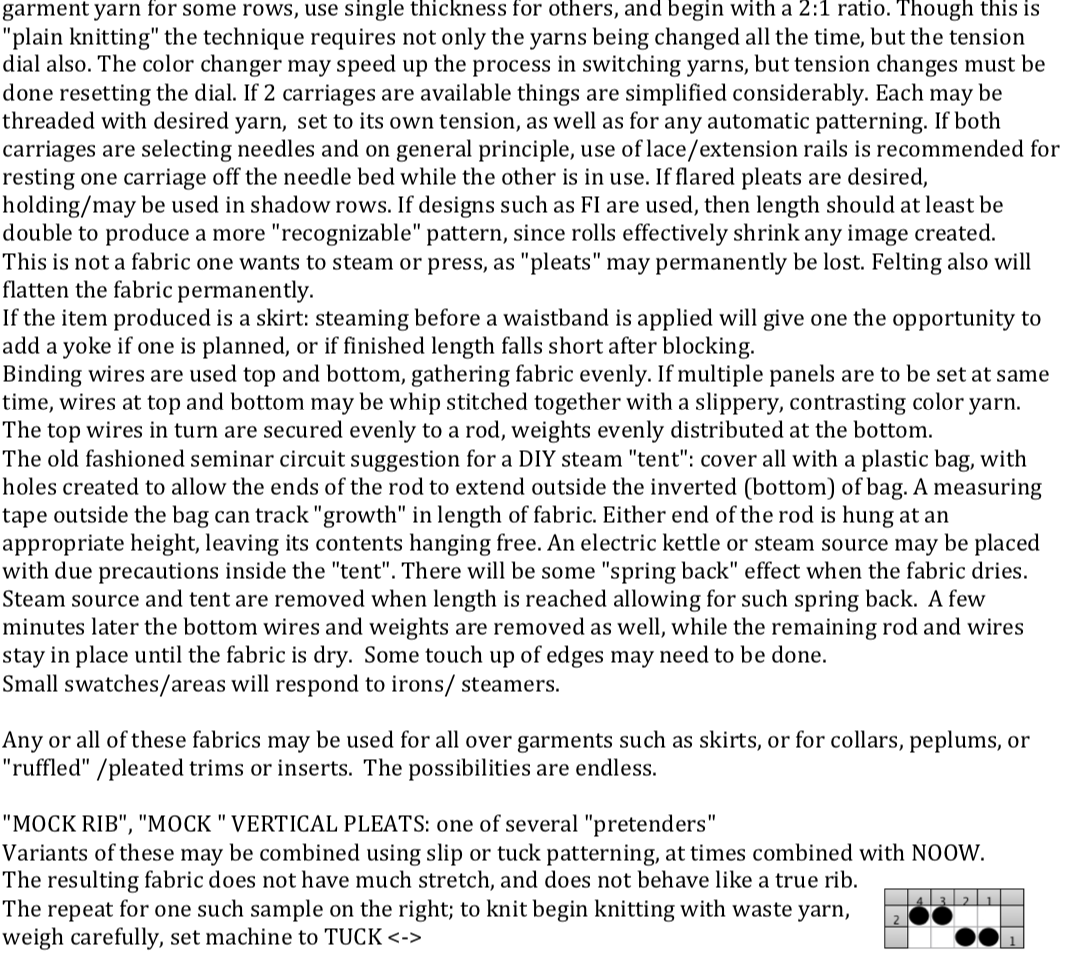 It is possible to knit shadow pleats combining them with the holding position to knit wedges which will produce a more circular shape. The shaping can occur in both thick and thin areas.

When working in a stocking stitch, if a soft-looking pleat is desired, the knitted fabric is simply folded to form the pleat and joined to keep the fold. Crisper folds require the added techniques described above. In hand knitting fold lines are created by slipping stitches on the fold line on the “public side”. Assuming the latter is the knit side of the fabric, this is often indicated by “sl1 with yarn in back” for the front fold line (and as another slip stitch option, for with yarn in front for the back fold line). A purl stitch is more commonly worked on the same side of the knit for the opposing, inner fold. Both the slipped stitch and the purl one are purled on the return purl row pass. It is also possible to work the former purl stitch as a purl, resulting in a garter stitch inner fold.

The subsequent posts followed with the information on pleated skirts made with lace carriage transfers (from Brother Knitting Techniques Book ) as well as on ribbed folding fabrics and automating pleats single bed (‘holding’/slip stitch shaping).

It is possible to knit folding pleats in knitted stocking stitch with the pleats formed vertically rather than sideways. The two needles (highlighted in red) close together form the top hard outer ridge, and the two empty spaces where needles are out of work (red dots) form the under-fold.  The remaining black dots represent out-of-work needles as well 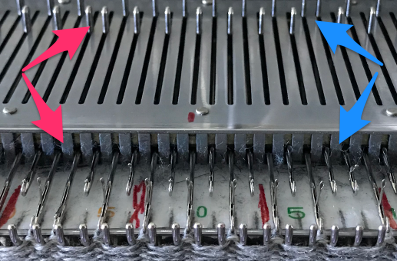 The fabric narrows considerably as it is stretched lengthwise to set the stitches. Several panels would be required for a garment such as a skirt. Such an item would need to be pulled into shape, pinned, and hot pressed. Fiber content will determine the crispness of the pleats after blocking, and their retention after cleaning. The swatch below is turned sideways for the sake of space.

More variations with folds can be made by varying the “rules” commonly recognized for creases. Working sideways once more: on a punchcard machine, using card # 1 locked, cast on making certain first, last, and every other needle are selected. My swatch varies the number of all knit rows between creasing methods. This allows for overlapping at fixed width at the top of the piece once the fabric is rotated lengthwise, creating a fair amount of bulk as pleats are fixed. Those same all-knit sections could be combined with holding techniques to get the width of pleats at one end to be a different width than at the other. The change knob is set to KC throughout. After the desired number of rows, cam buttons are set to slip <– –> for at least 4 rows (commonly this is done for 2).

cancel slip setting, complete the next knit section, transfer every other needle to the adjacent one on either right or left

the needles holding 2 stitches may be brought out to the hold position as each transfer is made, or pushed out to hold after the fact, keep the number of needles constant; 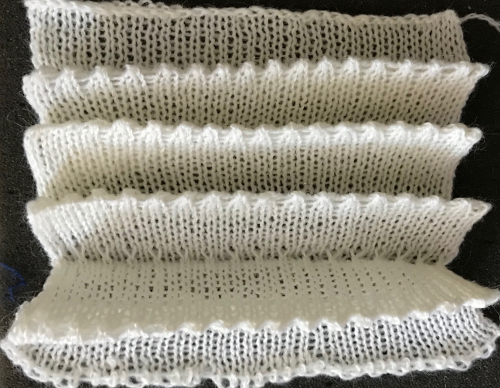 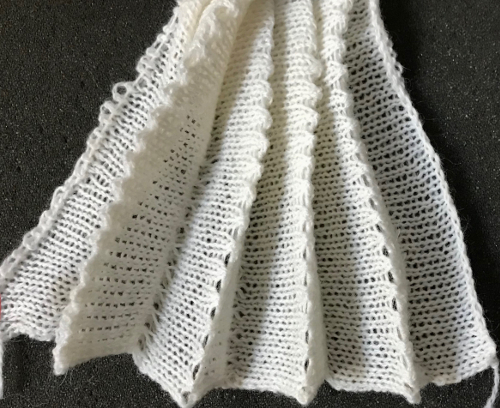